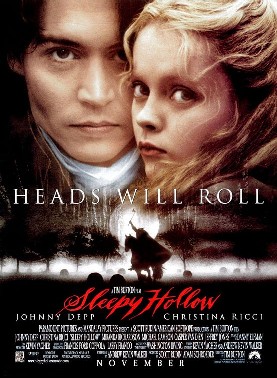 "Sleepy Hollow" is a 1999 period directed by , interpreting the legend of and based loosely around the story "". The third film collaboration between and Burton, the film also features , , , , , , , and . The story centers on police constable sent from to investigate a series of murders in the village Sleepy Hollow by a mysterious Headless Horseman. The style and themes of the story take inspirations from the late .

"Sleepy Hollow" had been in development since 1994 and was originally intended to be directed by . The film labored into development far enough for Burton to direct, who had unsuccessfully worked on "". Filming took place entirely on location in England where the crew built an entire soundstage. "Sleepy Hollow" would be released with box office success and critical acclaim, grossing roughly $206 million worldwide and scoring a 73 percent approval rating at "".

In 1799, police constable is dispatched by his superiors to the upstate hamlet of , to investigate a series of brutal slayings in which the victims have been found . A frequent user of new, though so far unproven investigative techniques such as finger-printing and autopsies, Crane arrives in Sleepy Hollow armed with his bag of scientific tools only to be informed by the town's elders that the murderer is not of flesh and blood, rather a headless supernatural warrior from beyond the grave who rides at night on a massive black .

Crane does not believe them and begins his own investigation, until he comes face to "face" with the . Boarding a room at the home of the town's richest family, the Van Tassels, Crane develops an attraction to their daughter, the mysterious Katrina, even as he's plagued by nightmares of his mother's horrific torture when he was a child.

Delving further into the mystery with the aid of the orphaned Young Masbeth, whose father was a victim of the Horseman, Crane discovers within the Western Woods both the Horseman's entry point between this world and the beyond, the gnarled Tree of the Dead, and his grave.

He finds the Horseman's skull is missing though the murders continue until Crane uncovers a murky plot revolving around revenge and land rights with the Horseman controlled by Katrina's stepmother, Lady Van Tassel, who sends the killer after her. Following a fight in the local windmill and a stagecoach chase through the woods, Crane eventually thwarts Lady Van Tassel by returning the skull to the Horseman, who regains his head and heads back to Hell along with her. His job in Sleepy Hollow over, Crane, Katrina and Young Masbeth return to New York, in time for the new century.

as : A New York police officer with an interest in science, sent to to investigate a string of grisly murders. Although he is squeamish, high-strung, and unnerved by the sight of blood, he is determined to reform law enforcement and the justice system. Ichabod uses innovative techniques such as postmortem examinations and scientific methods, even inventing a few gadgets to examine evidence more thoroughly. As was the case with "", Depp was Burton's first choice for the part, although Burton was still required to examine other options before casting him.

Producer once quoted, "Basically Johnny Depp is playing Tim Burton in all his movies,"

as Katrina Van Tassel: The love interest of Ichabod, she's the only heir to one of the richest farmers of the neighborhood. Burton wanted to cast Ricci as Katrina, thinking that she reminded him to be a fictional daughter of and .

as Baltus Van Tassel: After Peter Van Garret is murdered, he is placed as the leader of the city.

as / Crone: Wife of Baltus and stepmother of Katrina.

Marc Pickering as Young Masbath: An orphan who looks towards Ichabod as a father figure. In the act he helps him investigate the murders of the Headless Horseman alongside Katrina.

as Brom Van Brunt: A strong and charming man who is somewhat romantically involved with Katrina. He mocks Ichabod at first, but later helps him fight the Horseman.

as Reverend Steenwyck: The reverend of the village.

as Doctor Lancaster: The only Doctor and surgeon in the village; murdered by Steenwyck.

as Notary Hardenbrook: The local banker and possibly the oldest citizen in the village. Burton and Gough had previously worked together on "Batman" and "", with Gough portraying . During the casting phase of "Sleepy Hollow", Gough was staying in retirement, though Burton persuaded him to join the cast.

as Magistrate Philipse: A city official who is the fifth victim of the Headless Horseman.

as The Hessian Horseman: A brutal and sadistic mercenary sent to America during the . He is killed though his spirit lives on through (portrayed by ). Burton claims he based the Headless Horseman off , a film producer whom he personally dislikes as he had an unbearable experience with Peters on "Batman" and "".

, (previously won an Academy Award on 's "Ed Wood") and Burton's then fiancée are all involved in cameos. Lee is credited as "" and is seen in the beginning of the film as a city official who convinces Crane to transfer to the small village of . Landau portrays Peter Van Garrett with no dialogue, and is murdered by The Headless Horseman in the opening scene. Marie is featured as "Lady Crane," Ichabod's mother in flashbacks who was involved in and later painfully murdered by his strict religious father.

In 1994, make-up effects designer who had turned to directing with 's "Tales from the Crypt" had the notion to adapt 's short story "" into a feature film. Through his agent, Yagher was introduced to , a young writer who "" had recently been well received by , although had yet to be produced. Yagher and Walker spent several months working on a treatment which they subsequently pitched to various film studios.

The two secured a deal with producer , who sold the project to . The deal called for Yagher to direct with Walker scripting; the pair would share story credit. For a variety of reasons, the project went through the process and looked as if the film would never be produced, but in the summer of 1998 the film was brought back into Hollywood film circles. who had previously worked on the now canceled "" project was looking to direct a horror film for the first time in his career, as he was a high valued fan of the genre. Rudin and his producing partner felt the script to be a perfect vehicle for Burton and the deal was signed, as Burton was very much impressed with the script,

Burton was excited to be working with Rudin, a studio executive he first met when he brought "" to . Burton felt him to be "intelligent, eccentric and a good, strong producer that comes in handy".

For unknown reasons, was hired to write a "production polish" and would remain uncredited by the .

The original intention had been to shoot "Sleepy Hollow" predominantly on location, and towns were scouted throughout upstate New York and the (including Sleepy Hollow itself), and Sturbridge, Massachusetts.

The various as viewed by Burton in his childhood were a key inspiration for the design of the film. 's "" also was looked upon as well. While the production team was always going to build a substantial number of sets, the decision was taken early on that to fulfill Burton's vision best would necessitate shooting the movie in a totally controlled environment, which meant that all the interiors and virtually all of the exteriors, other than those shot on location at Lime Tree Valley and a few other brief scenes, would be shot on stages at Leavesden. Some studio work took place at , where the "Tree of the Dead" set was built. In total, 99% of the film was filmed on sets.

The cast and crew often said "The feeling one had walking around Sleepy Hollow's sets, and in particular the town at Lime Tree, was almost as if you were walking around the inside of Burton's head."

Burton hired as the upon viewing his work on "". Initially Burton and Lunezki contemplated shooting the film in black and white and in the old square . When that proved unfeasible, they opted for an almost effect which would enhance the fantasy aspect and make the "unreal believable".

The crew built a 60-foot-tall forced-perspective exterior (visible to highway travelers miles away), a base and rooftop set and a quarter-scale miniature. The interior of the mill, which was about 30-feet high and 25-feet wide, featured wooden gears equipped with mechanisms for grinding flour. A wider view of the windmill was rendered on a Leavesden soundstage set with a quarter-scale windmill, complete with rotating vanes, painted sky backdrop and special-effects fire. The actors would literally have burning wood exploding towards them. The flight shed interior served as the staging ground for the chase sequence between Ichabod, Katrina and Masbath in pursuit of the Headless Horseman. The hangar's interior walls were knocked down to create a 450-foot run, with a 40-foot width still allowing for coach and cameras. Heinrichs tailored the sets so Lubezki could shoot from above without seeing the end of the stage.

can be seen as an outsider to both the town of , and his counterparts at his profession in . Burton claimed this was another one of many influences to with actors and . The director said, "You see that they're intelligent, but you don't really know what's going on with them. There's some mystery to who they really are. You feel their aloneness, you feel like they don't socialize much, that they're having some problems, are somewhat tormented, are somewhat living inside their own head. That's why you relate to them."

The film was so criticized for its amount of violence and bloodshed that Burton had to defend the film in a public interview. [cite news | author=Bornin, Liane |title = Little Shot of Horror | publisher = | date = | url = http://www.ew.com/ew/article/0,,84834,00.html | accessdate=2007-12-26] To this day, Burton feels he received some of the best reviews of his career on "Sleepy Hollow".

"Sleepy Hollow" was nominated for three . Rick Heinrichs and Peter Young won Best Art Direction-Set Decoration. lost Best Cinematography to in "American Beauty" while Colleen Atwood lost Best Costume Design to 's work on "". [cite web|url= http://www.imdb.com/Sections/Awards/Academy_Awards_USA/2000|title=Academy Awards: 2000| publisher= |accessdate=2007-12-26] The film dominated its run with , while having and both winning respective categories. In addition Depp, Burton, , , , Atwood and the and make-up departments were all given nominations for their work. There, the film was also nominated for Best Horror Film before losing to "". [cite web|url= http://saturnawards.org/past.html#music|title=Past Saturn Award Winners| publisher=|accessdate=2007-12-26]