Year 1961 (MCMLXI) was a common year starting on Sunday (link will display the full calendar) of the Gregorian calendar. As MAD Magazine pointed out on its cover for the March 1961 issue, this was the first "upside-up" year—i.e., one in which the numerals that form the year look the same as when the numerals are rotated upside down—since 1881.[1] 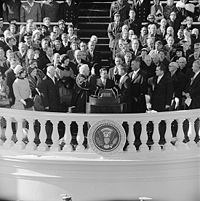 Jan. 20: John F. Kennedy inaugurated as President of the U.S.