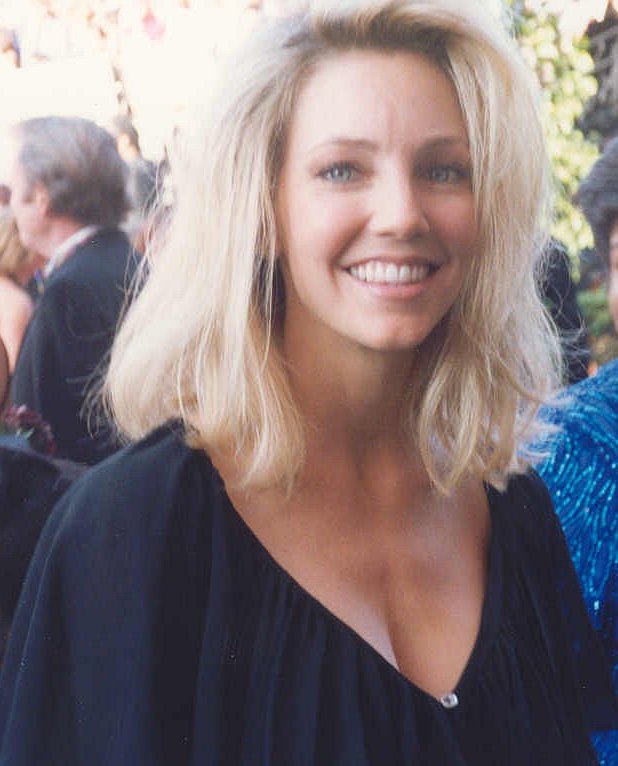 Heather Deen Locklear (born , ) is a six time--nominated American actress. She is primarily known for her television work, her most notable roles being on the 1980s "Dynasty", Officer Stacy Sheridan in the 1980s "", Amanda Woodward on the 1990s "", and Caitlin Moore on the sitcom "".

Locklear was born in , the daughter of Diane (née Tinsley), a production executive for , and William Robert Locklear, an administrator at . She went to . [ [http://www.filmreference.com/film/11/Heather-Locklear.html filmreference.com] ] [ [http://movies.yahoo.com/movie/contributor/1800048028/bio movies.yahoo.com] ] She is the youngest of four children and a cousin of 's second wife, . She is of Scottish and Indian ancestry.

While attending the , Locklear began modeling and working in commercials for the school store. She was a member of the sorority at the University of California.In 1979, Locklear landed her first roles appearing in "Tales of the Unexpected", and an episode of "" a year later. She landed a few more bit parts in shows, including "", before cast her in the role of Sammy Jo Dean during the second season of his TV series "Dynasty". It would be the beginning of a highly successful long-term collaboration with Spelling who, the following year, cast her in the cop show "" with . Until the mid 1980s, Locklear would appear as a series regular on "" while making semi-regular appearances on "Dynasty". She later became a full-time cast member on "Dynasty" until its cancellation in 1989.

In the 1990s, after the failed sitcom "Going Places" and the 3 hour mini-series "", Locklear went on to play another of her best known roles, that of scheming vixen Amanda Woodward on the primetime soap opera "". She was originally brought in as a guest star in an attempt to boost the ratings, and her billing in the credits reflected this. Despite eventually becoming a regular cast member in 1993, she continued to be listed as a "Special Guest Star" throughout the entire run of the series until its cancellation in 1999. Locklear also won First Americans in the Arts: Best Actress in a TV series for her role on "Melrose Place". After the show ended, she was immediately cast on the TV sitcom, "", opposite . Locklear starred in the short-lived drama "LAX" in 2004.

Throughout her career, Locklear has starred or guest-starred in no less than seven different television series produced by , these being "Dynasty, , , , , Hotel," and "".

Locklear has dated , Ryan Ruddy, , and and was married to from May 1986 to August 1993. After their , she later married on , in Paris. On , she gave birth to their daughter, Ava Elizabeth. Locklear's representative announced on , that divorce papers had been filed to dissolve the couple's marriage. In further papers filed by Sambora, it has been revealed that the couple has been separated since , , and that Sambora will be seeking of Ava. After filing for divorce, Sambora became romantically involved with , ending their friendship least in terms of media coverage. In April 2007, Locklear and fellow "Melrose Place" alum Jack Wagner confirmed their new romance at a charity golf event.

In March 2008, Locklear was involved in a controversy when a 911 call was made by a caller claiming to be her doctor who said that she was trying to commit suicide. [ [http://www.people.com/people/article/0,,20183713,00.html Locklear 911 Caller: Actress May Be 'Suicidal' - Heather Locklear : People.com ] ] [ [http://www.showbizspy.com/2008/03/10/cops-probe-heather-locklear-suicide-attempt/ Cops probe Heather Locklear "suicide attempt" | Showbiz Spy ] ] The authorities arrived at Locklear's home shortly afterwards. Locklear's publicist has since downplayed the incident stating that Locklear had never requested any medical assistance and the Ventura County Sheriff's Department later stated that no further action was taken once they arrived at Locklear's home as she appeared to be fine. They did, however, state that they still believed the call to be genuine. On June 24, 2008 she checked into a medical facility in for issues including anxiety and depression, and requested an in-depth evaluation of her medication in order to receive proper diagnosis and treatment. [cite web | url=http://www.people.com/people/article/0,,20208453,00.html | title="Heather Locklear in Treatment for 'Anxiety and Depression'" | author=Chiu, Alexis | publisher=People | date=2008-06-24 | accessdate=2008-06-24] Her agent announced that she was suffering from anxiety and depression. [ [http://www.comcast.net/tv/seenontv/3576/heatherlocklearintreatment/ Heather Locklear in Treatment - As Seen on TV ] ]

Locklear was arrested and released in on September 27, 2008 driving while under the influence of a controlled substance. [cite web | url=http://www.eonline.com/uberblog/b31349_report_heather_locklear_arrested_in.html| title=Report: Heather Locklear Arrested in California| author=Baclayan, Jovie | publisher=E! | date=2008-09-28 | accessdate=2008-09-28] [cite web|url=http://www.usatoday.com/life/people/2008-09-28-locklear_N.htm|title=Heather Locklear arrested in Calif. on DUI count|publisher=".com"|accessdate=2008-10-10] Locklear, 47, was pulled over by a California Highway Patrol officer after Jill Ishkanian, a member of the paparazzi, reported seeing the actress leaving a parking lot and "driving erratically."