Barbie is a fashion doll manufactured by the American toy-company Mattel, Inc. and launched in March 1959. American businesswoman Ruth Handler is credited with the creation of the doll using a German doll called Bild Lilli as her inspiration.

Barbie is the figurehead of a brand of Mattel dolls and accessories, including other family members and collectible dolls. Barbie has been an important part of the toy fashion doll market for fifty years, and has been the subject of numerous controversies and lawsuits, often involving parody of the doll and her lifestyle. 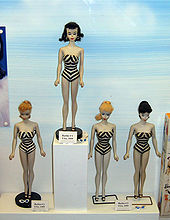 The original Barbie was launched in March 1959

Ruth Handler watched her daughter Barbara play with paper dolls, and noticed that she often enjoyed giving them adult roles. At the time, most children's toy dolls were representations of infants. Realizing that there could be a gap in the market, Handler suggested the idea of an adult-bodied doll to her husband Elliot, a co-founder of the Mattel toy company. He was unenthusiastic about the idea, as were Mattel's directors.

During a trip to Europe in 1956 with her children Barbara and Kenneth, Ruth Handler came across a German toy doll called Bild Lilli.[1] The adult-figured doll was exactly what Handler had in mind, so she purchased three of them. She gave one to her daughter and took the others back to Mattel. The Lilli doll was based on a popular character appearing in a comic strip drawn by Reinhard Beuthin for the newspaper Die Bild-Zeitung. Lilli was a blonde bombshell, a working girl who knew what she wanted and was not above using men to get it. The Lilli doll was first sold in Germany in 1955, and although it was initially sold to adults, it became popular with children who enjoyed dressing her up in outfits that were available separately.

Upon her return to the United States, Handler reworked the design of the doll (with help from engineer Jack Ryan) and the doll was given a new name, Barbie, after Handler's daughter Barbara. The doll made its debut at the American International Toy Fair in New York on March 9, 1959. This date is also used as Barbie's official birthday.

Mattel acquired the rights to the Bild Lilli doll in 1964 and production of Lilli was stopped. The first Barbie doll wore a black and white zebra striped swimsuit and signature topknot ponytail, and was available as either a blonde or brunette. The doll was marketed as a "Teen-age Fashion Model," with her clothes created by Mattel fashion designer Charlotte Johnson. The first Barbie dolls were manufactured in Japan, with their clothes hand-stitched by Japanese homeworkers. Around 350,000 Barbie dolls were sold during the first year of production.

Ruth Handler believed that it was important for Barbie to have an adult appearance, and early market research showed that some parents were unhappy about the doll's chest, which had distinct breasts. Barbie's appearance has been changed many times, most notably in 1971 when the doll's eyes were adjusted to look forwards rather than having the demure sideways glance of the original model.

Barbie was one of the first toys to have a marketing strategy based extensively on television advertising, which has been copied widely by other toys. It is estimated that over a billion Barbie dolls have been sold worldwide in over 150 countries, with Mattel claiming that three Barbie dolls are sold every second.[2]

Barbie products include not only the range of dolls with their clothes and accessories, but also a large range of Barbie branded goods such as books, apparel, cosmetics and video games. Barbie has appeared in a series of animated films and is a supporting character in Toy Story 2 and Toy Story 3.

Barbie has become a cultural icon and has been given honors that are rare in the toy world. In 1974, a section of Times Square in New York City was renamed Barbie Boulevard for a week. In 1985, the artist Andy Warhol created a painting of Barbie.[4][5]

Barbie's full name is Barbara Millicent Roberts. In a series of novels published by Random House in the 1960s, her parents' names are given as George and Margaret Roberts from the fictional town of Willows, Wisconsin.[9] In the Random House novels, Barbie attended Willows High School, while in the Generation Girl books, published by Golden Books in 1999, she attended the fictional Manhattan International High School in New York City (based on the real-life Stuyvesant High School[10]).

She has an on-off romantic relationship with her boyfriend Ken (Ken Carson), who first appeared in 1961. A news release from Mattel in February 2004 announced that Barbie and Ken had decided to split up,[11] but in February 2006 they were hoping to rekindle their relationship after Ken had a makeover.[12]

Barbie has had over 40 pets including cats and dogs, horses, a panda, a lion cub, and a zebra. She has owned a wide range of vehicles, including pink Corvette convertibles, trailers, and jeeps. She also holds a pilot's license, and operates commercial airliners in addition to serving as a flight attendant. Barbie's careers are designed to show that women can take on a variety of roles in life, and the doll has been sold with a wide range of titles including Miss Astronaut Barbie (1965), Doctor Barbie (1988) and Nascar Barbie (1998).

Mattel has created a range of companions for Barbie, including Hispanic Teresa, Midge, African American Christie, and Steven (Christie's boyfriend). Barbie's siblings and cousins were also created including Skipper, Todd (Stacie's twin brother), Stacie (Todd's twin sister), Kelly, Krissy, and Francie. Barbie was friendly with Blaine, an Australian surfer, during her split with Ken in 2004.[13]

Barbie's popularity ensures that her effect on the play of children attracts a high degree of scrutiny. The criticisms leveled at her are often based on the assumption that children consider Barbie a role model and will attempt to emulate her.

Barbie has frequently been the target of parody:

Mattel estimates that there are well over 100,000 avid Barbie collectors. Ninety percent are women, at an average age of 40, purchasing more than twenty Barbie dolls each year. Forty-five percent of them spend upwards of $1000 a year. Vintage Barbie dolls from the early years are the most valuable at auction, and while the original Barbie was sold for $3.00 in 1959, a mint boxed Barbie from 1959 sold for $3552.50 on eBay in October 2004.[53] On September 26, 2006, a Barbie doll set a world record at auction of £9,000 sterling (US $17,000) at Christie's in London. The doll was a Barbie in Midnight Red from 1965 and was part of a private collection of 4,000 Barbie dolls being sold by two Dutch women, Ietje Raebel and her daughter Marina.[54]

In recent years, Mattel has sold a wide range of Barbie dolls aimed specifically at collectors, including porcelain versions, vintage reproductions, and depictions of Barbie as a range of characters from film and television series such as The Munsters and Star Trek.[55][56] There are also collector's edition dolls depicting Barbie dolls with a range of different ethnic identities.[57] In 2004, Mattel introduced the Color Tier system for its collector's edition Barbie dolls including pink, silver, gold and platinum, depending on how many of the dolls are produced.[58]

In June 2001, MGA Entertainment launched the Bratz series of dolls, a move that gave Barbie her first serious competition in the fashion doll market. In 2004, sales figures showed that Bratz dolls were outselling Barbie dolls in the United Kingdom, although Mattel maintained that in terms of the number of dolls, clothes and accessories sold, Barbie remained the leading brand.[59] In 2005 figures showed that sales of Barbie dolls had fallen by 30% in the United States, and by 18% worldwide, with much of the drop being attributed to the popularity of Bratz dolls.[60]

In December 2006, Mattel sued MGA Entertainment for $500 million, alleging that Bratz creator Carter Bryant was working for Mattel when he developed the idea for Bratz.[61] On July 17, 2008, a federal jury agreed that the Bratz line was created by Carter Bryant while he was working for Mattel and that MGA and its Chief Executive Officer Isaac Larian were liable for converting Mattel property for their own use and intentionally interfering with the contractual duties owed by Bryant to Mattel.[62] On August 26, the jury found that Mattel would have to be paid $100 million in damages. On December 3, 2008, U.S. District Judge Stephen Larson banned MGA from selling Bratz. He allowed the company to continue selling the dolls until the winter holiday season ended.[63][64] MGA is currently appealing against the court's ruling.[65] In August 2009, MGA introduced a range of dolls called Moxie Girlz, intended as a replacement for Bratz dolls.[66]