Barbie as the Island Princess

Barbie as the Island Princess 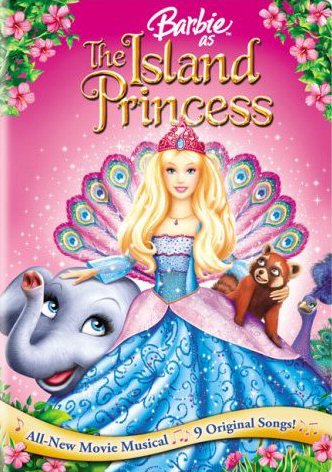 "Barbie as the Island Princess" is a 2007 computer animated film. It is part of the , a series of CGI Barbie films, and the second to be a musical. The film features the voice of , who has been voicing the female protagonist in all the CGI Barbie movies to date, as Rosella. A line of s, s, and other products were produced based on the film and released in conjunction with the movie.

The score for this film was composed by Arnie Roth. Songs for the film were written by Megan Cavallari, Amy Powers and Executive Producer Rob Hudnut.

As a little girl, Ro was shipwrecked on a tropical island and grew up up under the watch of several animals: Sagi, a red panda, Azul, a peacock and Tika, a baby elephant. Ro learns to talk to animals, but fails to remember anything about her past before the shipwreck. Her only clues are a battered trunk with a broken nameplate on it (Ro) and a shredded flag with a white rose.

Ten years later, a handsome prince named Antonio discovers Ro's island. She saves his life when crocodiles attack him and his friend. Grateful for her help, Antonio asks if Ro will return with him to his kingdom, . Determined to rediscover her past, Ro agrees as long as her animal friends can tag along.

When they return, Antonio's family greets them: King Peter, Queen Danielle, and his triplet sisters, Rita, Gina and Sofia. While the triplets love Ro and her animals, Danielle is unsure about Ro while Peter clearly doesn't approve. Ro is uncivilized, and Antonio's parents are disturbed when their son expresses affection towards her. Ro does, however, succeed in earning the friendship of Danielle’s pet monkey, Tallulah.

Peter is determined to have his adventurous son settle down and marry. While Antonio was away, the king arranged for him to marry Princess Luciana from a neighboring kingdom. Like Antonio, Luciana doesn't want to marry someone she doesn't love, but she is forced to be a puppet in her mother’s schemes. Unknown to all, Ariana (Luciana’s mother) is plotting to kill Antonio's family at the wedding and take over their kingdom. Her motive is revenge for her parents, who were banished and reduced to pig farmers for the attempted murder of Antonio's parents years ago. Ariana sees Ro as a threat to her plans and quickly plots to dispose of the "island girl."

Ro tries repeatedly to please Antonio's parents but to no avail. Ro’s animals try to cheer her up by helping her prepare for Antonio and Luciana’s engagement ball. Thanks to her friends, Ro arrives at the ball in a stunning gown, and her grace leaves Antonio's parents and guests impressed. When Antonio confesses to Ro that he loves her, Ro reminds him of his pledge to Luciana. After a dance together, she leaves and spots a carriage outside the castle bearing the same design as the flag found back on the island. Ro discovers that the flag belongs to another neighboring kingdom called Paladia, but the duke and dutchess (the carriage's owners) only had sons; no daughters.

Furious at his father's attempts to push him into marriage, Antonio writes a note for Ro, saying that he wants to run away with her instead of marrying Luciana. Tika witnesses this and decides to hide the note from Ro, fearing that Ro will leave her.

As part of her plan to get rid of Ro, Ariana has her three pet rats put a deadly sleeping herb called “sunset herb” into the food of all the animals in the kingdom. The next day, animals all over the kingdom are unable to wake up, and Ro is blamed for the epidemic. Peter has Ro locked away in the dungeon, but when Antonio begs for her release, Peter makes his son agree to marry Luciana.

Ro is banished from Apollonia and placed on a boat that will take her back to her island. On the journey, Tika confesses how she hid Antonio's note, and Ro forgives her. The entire group are then thrown overboard, as Ariana had paid a man to sabotage the boat. When Ro almost drowns, her memory is triggered of how she was lost at sea as a child, and of a man yelling her real name: "Rosella". Ro manages to call dolphins for help, and they bring the group back to shore.

As Antonio and Luciana's wedding starts, Ariana sneaks some of the sunset herb into the wedding cake. Ro arrives and quickly starts to make a rose tonic antidote for the poison. She almost completes her task when the king's guards discover her. Sagi escapes and takes the antidote to Tallulah, who has been poisoned. One of the guards chase after him, but Tika takes him down. The other guard is about to lead Ro back to the dungeons.

Hearing about the commotion from Tika, who enters the wedding room just as it is about to start, Antonio, Luciana, Antonio's parents, Ariana and their guests hurry to the greenhouse, disrupting the wedding. Antonio is ecstatic to see Ro again, while Peter demands that she be thrown in prison for daring to return. She tries to explain the animals have really been poisoned and that she can cure them. The king is hesitant at first, but then a cured Tallulah appears with Sagi, showing that Ro is telling the truth. Ro then exposes Ariana's plot to everyone. Ariana denies it, but a shocked Luciana confirms Ro's story by saying that her mother had told her not to eat any wedding food, in fear of "bad luck". Exposed, Ariana tries to make a getaway in the wedding carriage, but after a long chase scene, is eventually stopped and captured by falling into the pigs' pen.

Peter apologizes to Ro and his son. He gives the couple his blessing and embraces Ro. She tells the royal family that her real name is Rosella. A guest behind them, Queen Marissa from Paladia, overhears Ro and comes forward. She tells them that she had a daughter named Rosella. Ro pauses and then starts to sing a lullaby she knew since she was little. Astonished, Marissa joins in. Antonio, his parents and Ro's animal friends watch as the reunited mother and daughter embrace. Ro and Antonio are promptly married. Luciana also attends the wedding and meets a handsome young prince. The happy couple (Ro and Antonio) wave goodbye to everyone as they set sail on a honeymoon voyage with Sagi, Azul, Tika and Tallulah in tow.

The songs in the film, in chronological order, are as followed:
#Welcome To The Island (Instrumental)
#Here On My Island
#Right Here In My Arms
#A Brand New Shore
#I Need To Know
#Love is for Peasants
#At the Ball
#The Rat Song
#Always More
#Right Here In My Arms (Reprise)
#When We Have Love
#I Need To Know (Pop Version) — Not included in the film

There are several references to other Barbie films: "" and "". Genevieve's dress is shown by Talullah in the song "At the Ball". Wolfie appears in "The Rat Song". Genevieve's older sisters appear and disappear throughout the ball and weddings. In a 'cut' clip on the Barbie website, Azul is listening to the song "Shine".

*imdb title|id=1092053|title=Barbie as the Island Princess