Monster High is an American line of fashion dolls created by Garrett Sander with the illustrations done by Kellee Riley. They were officially released in July 2010 but made in 2007.[1]

The characters are inspired by monster movies and horror fiction, distinguishing them from most fashion dolls. Although both are made by Mattel, Barbie and Monster High are said to be rivals.[2] The characters are depicted as being either related to or as offspring of famous monsters such as Dracula, Frankenstein's monster, the Mummy, Medusa, the Creature from the Black Lagoon, The Phantom of the Opera, zombies and the werewolf.

A video game titled "Monster High Ghoul Spirit" was released on 25 October 2011. It is available for a the Nintendo DS and the Nintendo Wii.

An app titled "Ghoul Box" is available on iTunes for an iPad and iPhone.

A book series called "Monster High" written by Lisi Harrison (The Clique, Alphas) released its first novel released in Fall 2010. This is her third series. So far, there are three books. 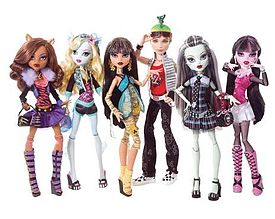 The dolls are 10.5 inches tall (11 inches for the male dolls) and have well -sized heads, doe eyes, small noses and full lips. Their bodies are made from ABS plastic, while their heads are made from soft PVC. They have various skin tones (blue, green, pink, etc.) and each character has a unique head mold. Their hair is made of saran or kanekalon fibers, though all of the male dolls occasionally have molded plastic hair. They also have articulated bodies and their forearms and hands are removable to make redressing easier.

Aside from physical attributes, the dolls are quite different in the characterization of their clothes. All of them have various attributes of the monsters they are related to (i.e. fangs, stitches, wolf ears, fins, bandages, etc.).[5]

The Monster High website went live on May 5, 2010.[6] Visitors can access games, character bios, several downloads and several more activities.[7] The site also makes available online webisodes for Monster High.[8] One new webisode was added each Friday from May 5 to July 30, 2010. After a nearly 3 month hiatus, the show returned with Freakout Friday uploaded on October 29. The webisodes can also be viewed on Monster High's YouTube channel.

The websidoes's theme song, "Fright Song"'s music video aired on Youtube and can be purchased on Itunes. The behind-the-scenes video was later viewed.

A commercial for the website aired on national television on August 5, 2010 in the U.S..[9]

'Monster High: New Ghoul @ School', a 30-minute Halloween special created by Wildbrain Entertainment, aired on Nickelodeon on October 31, 2010. For the special, Allison Iraheta performed 2 songs: "Scars" and "Friday I'll Be Over U". The special followed new student Frankie Stein's first week at Monster High, as she tries to fit in with the other students. Comcast's On Demand released the special before it aired on Nickelodeon. This can be watched on the website.

'Monster High: Fright On', was a one-hour special that aired on Nickelodeon on October 30, 2011. Monster High expanded to allow students from the vampiric school, Belfry Prep and the werewolf school, Crescent Moon High. amongst their student body. Vampires and werewolves have had a long time feud and made worse by a normie administrator intent on ruining any harmony between both groups. This can also be watched on the website.

The Monster High books are written by Lisi Harrison, who is known for writing the popular book series edit] Characters

Frankie Stein - Frankie is the daughter of Frankenstein's Monster. Frankie is only 15 days old. She has black and white hair, stitches, and bolts, and is new to Monster High. Her pet is a puppy named Watzit. Frankie is very friendly and athletic, but has a clumsy streak, as her body parts tend to fly off. She is begging a relationship with Jackson Jeykll, but things aren’t looking so voltage in that relationship.

Draculaura - Draculaura is the daughter of Count Dracula, but she's vegan and does not drink blood. She is 1,600 years old and her pet is a bat named Count Fabulous. She has fangs and pink skin, and is friendly and very sweet and also likes to write stories about her friends. Draculaura is a big fan of pink and black, and loves to take long walks under the sun (with an umbrella, that is). She also dates Clawdeen's brother, Clawd.

Clawdeen Wolf - Clawdeen is the daughter of the werewolf with an older brother named Clawd. She is 15 years old and is covered with fur, with two piercings in each of her pointy wolf ears. She has a purple pet cat named Crescent, loves fashion and is confident, outgoing and very friendly to any monster.

Lagoona Blue - Lagoona is the daughter of Gill man Lagoona comes from down under the sea and speaks with an Australian accent. She has a pink, pet piranha Neptuna that she carries with her in a fishbowl purse. She is a sporty tom-boy who loves to be in contact with water.

Ghoulia Yelps - Ghoulia is the daughter of a zombie. She is the smartest girl at Monster High, although she only speaks "zombie" -- moans and groans. She has a blue pet owl named Sir Hoots A Lot. She is shy and loves to read, but is also quite thoughtful.

Cleo de Nile - Cleo is the daughter of the Mummy and has an older sister named Nefera. She has a pet snake named Hissette that is somewhat poisonous. She is the fearleading squad captain and Deuce Gorgon's girlfriend. Cleo is the most popular monster in "Monster High". Cleo can be quite stuck-up, but is a good friend and has been softening to those around her. Her best friend is Ghoulia Yelps.

Deuce Gorgon - Deuce is the son of the gorgon, Medusa. He likes to skateboard, is interested in cooking and loves to play casketball with his team. He wears sunglasses to prevent him from turning other people to stone temporarily and has several green snakes on his head. He is Cleo de Nile's boyfriend.