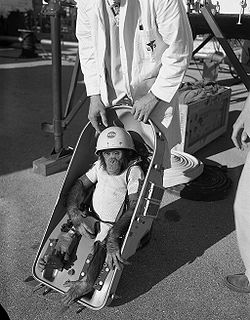 Ham fitted into a special biopack couch prior to flight to space.

Ham (July 1956 – January 19, 1983), also known as Ham the Chimp and Ham the Astrochimp, was the first chimpanzee launched into outer space in the American space program. Ham's name is an acronym for the lab that prepared him for his historic mission — the Holloman Aerospace Medical Center, located at Holloman Air Force Base in New Mexico.

There were originally 40 chimpanzee flight candidates at Holloman. After evaluation the number of candidates was reduced to 18, then to 6, including Ham.[2]:245-246 Officially, Ham was known as No. 65 before his flight, and only renamed "Ham" upon his successful return to earth. This was reportedly because officials did not want the bad press that would come from the death of a "named" chimpanzee if the mission were a failure. Among his handlers, No.65 had been known as Chop Chop Chang.[3][4] 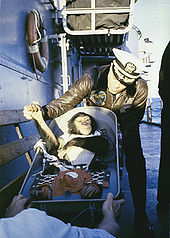 The famous "hand shake" welcome. After his flight on a Mercury-Redstone rocket, chimpanzee Ham is greeted by the commander of the recovery ship, USS Donner (LSD-20).

Beginning in July 1959, the three-year-old chimpanzee was trained at the Holloman Air Force Base Aero Medical Field Laboratory to do simple, timed tasks in response to electric lights and sounds.[5] In his pre-flight training, Ham was taught to push a lever within five seconds of seeing a flashing blue light; failure to do so would result in an application of positive punishment in the form of a mild electric shock to the soles of his feet, while a correct response earned him a banana pellet.[6]:243

What differentiates Ham's mission from all the other primate flights to this point is that he was not merely a passenger, and the results from his test flight led directly to the mission Alan Shepard would make on May 5, 1961 aboard Freedom 7.

On January 31, 1961, Ham was secured in a Project Mercury mission labeled MR-2 and launched from Cape Canaveral, Florida, on a suborbital flight.[6]:314-315 Ham had his vital signs and tasks monitored using computers on Earth.[7] The capsule suffered a partial loss of pressure during the flight, but Ham's space suit prevented him from suffering any harm.[6]:315 Ham's lever-pushing performance in space was only a fraction of a second slower than on Earth, demonstrating that tasks could be performed in space.[6]:316 Ham's capsule splashed down in the Atlantic Ocean and was recovered by a rescue ship later that day.[6]:316 He only suffered a bruised nose.[7]. His flight was 16 minutes and 39 seconds long. 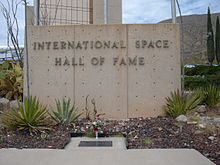 After his death in 1983, Ham's body was turned over to the Armed Forces Institute of Pathology for necropsy. It was decided that the AFIP would retain Ham's skeleton for further study, and his body was cleaned of soft tissue by lengthy placement in the Dermestid beetle colony at the Smithsonian. Whatever remained, minus the skeleton, was transported to the International Space Hall of Fame in Alamogordo, New Mexico, and buried. The grave is marked by a memorial plaque. Ham's skeleton now resides in the AFIP's National Museum of Health and Medicine where he is kept and cared for alongside the skeletal remains of Civil War soldiers.

Ham's backup, Minnie, was the only female chimp trained for the Mercury program. After her role in the Mercury program ended, Minnie became part of an Air Force chimpanzee breeding program, producing nine offspring and helping to raise the offspring of several other members of the chimpanzee colony.[2]:258-259 The last surviving astro-chimp, she died at age 41 on March 14, 1998.[2]:259