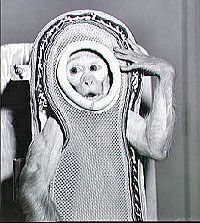 Before humans went into space, several animals were launched into space, including numerous monkeys, so that scientists could investigate the biological effects of space travel. The United States launched flights containing primate cargo primarily between 1948-1961 with one flight in 1969 and one in 1985. France launched two monkey-carrying flights in 1967. The Soviet Union and Russia launched monkeys between 1983 and 1996. Most monkeys were anesthetized before lift-off. Overall thirty-two monkeys flew in the space program; none flew more than once. Numerous back-up monkeys also went through the programs but never flew. Monkeys from several species were used, including rhesus monkeys, cynomolgus monkeys, squirrel monkeys, and pig-tailed macaques. Some chimpanzees were also used.

Albert was followed by Albert II who survived the V2 flight but died on impact on June 14, 1949 after a parachute failure.[2] Albert II became the first monkey in space as his flight reached 134 km (83 mi) - past the Kármán line of 100 km taken to designate the beginning of space.[4] Albert III died at 35,000 feet (10.7 km) in an explosion of his V2 on September 16, 1949. Albert IV on the last monkey V2 flight died on impact on December 8 that year after another parachute failure.[2] His flight reached 130.6 km. Alberts I, II, and IV were rhesus monkeys while Albert III was a cynomolgus monkey.

Monkeys later flew on Aerobee rockets. On April 18, 1951, a monkey, possibly called Albert V, died due to parachute failure. Yorick, also called Albert VI, along with 11 mouse crewmates, became the first animals to survive rocket flight on 20 September 1951; although, he died 2 hours after landing. Two of the mice also died after recovery; all of the deaths were thought to be related to stress from overheating in the sealed capsule in the New Mexico sun while awaiting the recovery team.[2] Albert VI's flight reached 70 km, below the definition of spaceflight. Patricia and Mike, two cynomolgus monkeys, flew on May 21, 1952 and survived but their flight was only to 26 kilometers.

On December 13, 1958, Gordo, also called Old Reliable, a squirrel monkey, survived being launched aboard Jupiter AM-13 by the US Army.[4] He was killed due to mechanical failure of the parachute recovery system in the rocket nose cone.[4] 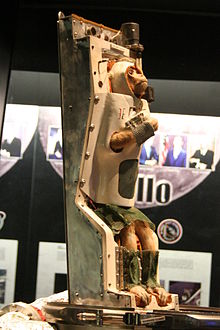 Able on display at the National Air and Space museum

On May 28, 1959, aboard the JUPITER AM-18, Able, a rhesus monkey, and Miss Baker, a squirrel monkey, became the first monkeys to successfully return to Earth after traveling in space. Able was born at the Ralph Mitchell Zoo in Independence, Kansas.[5] They travelled in excess of 16,000 km/h, and withstood 38 g (373 m/s²).[6] Able died June 1, 1959 while undergoing surgery to remove an infected medical electrode, from a reaction to the anesthesia. Baker died November 29, 1984 at the age of 27 and is buried on the grounds of the United States Space & Rocket Center in Huntsville, Alabama. Able was preserved, and is now on display at the Smithsonian Institution's National Air and Space Museum. Their names were taken from a phonetic alphabet. Able inspired a character in the film Night at the Museum: Battle of the Smithsonian.

On December 4, 1959, Sam, a rhesus monkey, flew on the Little Joe 2 in the Mercury program to 53 miles high.[4] Miss Sam, also a rhesus monkey, followed in 1960, on Little Joe 1B although her flight was only to 8 mi (13 km) in a test of emergency procedures. Ham and Enos also flew in the Mercury program but they were chimpanzees. The names 'Sam' and 'Ham' were acronyms. Sam was named in homage to the School of Aerospace Medicine at Brooks Air Force Base in San Antonio, Texas. The name 'Ham' was taken from Holloman Aerospace Medicine at Holloman Air Force Base, New Mexico.

Goliath, a squirrel monkey, died in the explosion of his Atlas rocket on November 10, 1961. A rhesus monkey called Scatback flew a sub-orbital flight on December 20, 1961 but was lost at sea after landing.

Bonny, a pig-tailed macaque, flew on Biosatellite 3, a mission which lasted from 29 June to 8 July 1969. This was the first multi-day monkey flight, but came after longer human spaceflights were common. He died within a day of landing.

France launched a pig-tailed macaque named Martine on a Vesta rocket on March 7, 1967 and another named Pierette on March 13. These suborbital flights reach 243 km (151 mi) and 234 km (145 mi), respectively. Martine became the first monkey to survive more than a couple of days after flying above the international definition of the edge of space.

Soviet Union and later (after 1991) Russia

The Soviet/Russian space program in the Bion program [7] satellites used only the rhesus species.

Monkeys Krosh and Ivasha flew on Bion 10 from December 29, 1992 to January 7, 1993.[12] Sixteen-year-old space veteran Krosh has produced offspring, after rehabilitation upon returning to Earth.

Lapik and Multik are the last space monkeys to date. They flew aboard the Bion 11 mission from December 24, 1996 to January 7, 1997.[13] Multik died following inhalation of vomitus while anesthetized for US biopsy sampling on January 8. Lapik almost died during the identical procedure. These 2 incidents, plus the bad reaction to post-flight anesthesia in the US monkey, Able, 4 days after return to earth were never followed up as a potential impact of spaceflight contraindicating anesthesia during or shortly after spaceflght. Further US support of the Bion program was cancelled.[13]

The names of the monkeys started with each letter of the Russian alphabet sequentially (А, Б, В, Г, Д, Е, Ж, З...)

On December 23, 1969, as part of the 'Operación Navidad' (Christmas Operation), Argentina launched Juan (a cai monkey, native to Argentina's Misiones Province) using a two-stage Rigel 04 rocket. It ascended only up to 60 kilometers and then was recovered successfully.[14][15][16] This is below the international definition of space. Later, on the February 1, 1970 the experience was repeated with a female monkey of the same species using a X-1 Panther rocket. Although it reached a higher altitude than its predecessor, it was lost after the capsule's parachute failed.