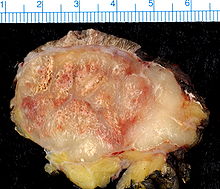 This cancer is a type of neuroendocrine tumor, like small cell lung cancer. Once it has metastasized to the lymph nodes, the 5-year survival rate for a patient is about 50 percent. A patient with a small tumor (less than 2 cm) that has not metastasized to the lymph nodes may have a 5-year survival rate of more than 80 percent. Up to half of patients suffer a recurrence.[3] 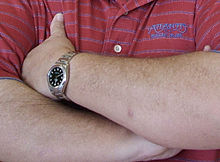 Small spot on the left arm is Merkel cell cancer.

It usually appears as a firm, painless, nodule, or tumor. These flesh-colored, red, or blue tumors vary in size from 5 mm (less than a quarter of an inch) to more than 5 cm (2 inches). The tumor grows rapidly. About half of all Merkel cell cancers occur on the sun-exposed areas of the head and neck, while one-third begin on the legs, and 15% occur on the arms. The cancer may also begin on other parts of the body, such as the trunk.

From initial onset, Merkel cell cancer metastasizes quickly and spreads to other parts of the body, tending towards the regional lymph nodes. The tumor tends to invade underlying subcutaneous fat, fascia, and muscle. It can also metastasize to the liver, lungs, brain or bones. 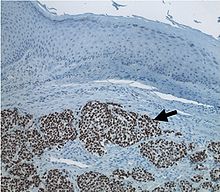 A newly discovered virus called Merkel cell polyomavirus (MCV) is suspected to contribute to the development of the majority of MCC[2]. Approximately 80% of MCC have this virus integrated in a monoclonal pattern [3][4], indicating that the infection was present in a precursor cell before it became cancerous. At least 20% of MCC tumors are not infected with MCV suggesting that MCC may have other causes as well. Polyomaviruses have been known to be cancer viruses in animals since the 1950s [5], but this is the first polyomavirus strongly suspected to cause tumors in humans. Like other tumor viruses, most people who are infected with MCV probably do not develop MCC; it is unknown what other steps are required for cancer to develop.[4] Ultraviolet light (sun) exposure probably contributes to MCC development in a large number of cases and MCC can occur together with other sun exposure-related skin cancers that are not infected with MCV. Intriguingly, most MCV viruses obtained so far from tumors have specific mutations that render the virus uninfectious[6][7]. It is unknown whether these mutations result from sun exposure. MCC also occurs more frequently than expected among immunosuppressed patients, such as transplant patients, AIDS patients and elderly persons, indicating that the tumor is under immune control[8][9].

While MCV is a common human infection [10], MCC patients whose tumors are infected with MCV have higher antibody levels against the virus than similarly infected healthy adults[11]. A recent study of a large MCC patient registry from Finland suggests that persons with MCV-positive MCC tumors have better prognoses than those without MCV infection[12]. MCV-positive MCC may be a less aggressive form of the disease, but these results also may be due to differences in tumor stage at diagnosis, age of the patient or location of the tumor rather than an intrinsic difference in the severity of the tumors.

This type of cancer occurs mostly in — though is not restricted to — Caucasians between 60 and 80 years of age. It occurs about twice as often in males as in females. There are roughly 1200 new cases diagnosed a year in the United States, compared to 60,000 new cases of melanoma and over 1 million new cases of nonmelanoma skin cancer.[5] Merkel cell cancer can be mistaken for another cancer like basal cell carcinoma, squamous cell carcinoma, malignant melanoma, lymphoma, or small cell carcinoma, or may appear to be a benign cyst. Researchers believe that exposure to sunlight or ultraviolet light may increase a person’s risk of this disease.

Surgery is usually the first treatment that a patient undergoes for Merkel cell cancer. In appearance although the lesion appears to be a purple-red in color, there is little else to distinguish this skin cancer from other types such as SCC, BCC and melanoma. Its identity usually comes as a surprise after the surgery.

It is normal for the tumor to be removed along with a border of healthy tissue surrounding it. This margin does not appear to be as crucial as it is in melanoma, and indeed, it is common for the Merkel cell cancer to return soon after near the operation site.

Using surgery, nearby or regional lymph nodes may also be removed because once the lesion is more than 1 cm, there is a large risk that they will contain cancer cells. Sometimes the doctor performs a sentinel lymph node biopsy. In this procedure, the doctor injects a dye or radioactive substance near the tumor. This material flows into the first lymph nodes where cancer is likely to spread (the sentinel nodes). These nodes are then removed and checked for cancer cells. This procedure has been demonstrated to be an important prognostic indicator. Results help dictate the use of appropriate adjuvant therapy, if necessary. However, surgery is usually not sufficient to control Merkel cell cancer by itself.

Adjuvant radiotherapy has been shown to be effective in reducing recurrence and increasing five year survival of patients with Merkel Cell Carcinoma.[citation needed] Patients who present with no metastases and a negative sentinel lymph node biopsy have a good prognosis when treated with surgery and radiotherapy - approximately 90% survival at five years.

Merkel cell cancer that has metastasized may respond to treatment with chemotherapy and/or radiation. This therapy usually does not cure the disease, but can be effective in shrinking the tumor if the tumor is too large to be removed, or is located in a place where removal would be difficult or dangerous.

Sentinel lymph node biopsy detects MCC spread in one third of patients whose tumors would have otherwise been clinically and radiologically understaged and who may not have received treatment to the involved node bed. There was a significant benefit of adjuvant nodal therapy, but only when the SLNB was positive. Thus, SLNB is important for both prognosis and therapy and should be performed routinely for patients with MCC. In contrast, computed tomographic scans have poor sensitivity in detecting nodal disease as well as poor specificity in detecting distant disease.[6]

Famous people who have had Merkel cell cancer