In Kentucky, I-71 begins east of Downtown Louisville at the Kennedy Interchange, where it meets I-64 and I-65. This interchange is sometimes called "Spaghetti Junction". From Louisville, it roughly follows the Ohio River in a diagonal path toward Northern Kentucky. Between Louisville and Cincinnati, I-71 is largely a two-lane highway, except for a couple of miles in Sparta in which it runs three lanes each way. I-71 merges with Interstate 75 near Walton and intersects Interstate 275, the Cincinnati beltway. After passing through Covington, the freeway crosses the Ohio River via the lower level of the Brent Spence Bridge and continues into Cincinnati.

In Cincinnati, I-71 splits immediately from I-75 and heads due east onto Fort Washington Way, where it continues through downtown Cincinnati concurrently with US-50 for less than a mile. Just east of downtown, US-50 splits from I-71 and continues east; I-71 bends north and receives Interstate 471, a spur from southeast of the city. I-71 then heads in a general northeast direction through urban Cincinnati and into its surrounding suburbs. After another interchange with the Interstate 275 beltway, the freeway leaves the metropolitan area and heads towards Columbus. It continues northeast until it reaches South Lebanon, Ohio, where it begins cutting east across the flat plains of southwest Ohio. The freeway crosses the Little Miami River on the Jeremiah Morrow Bridge, which is a continuous truss bridge and the tallest bridge in Ohio at 239 feet above the river. I-71 heads towards Columbus then intersects with the bypass I-270 before heading north into urban Columbus, where it junctions I-70 and exits out of Columbus. The highway continues north until near Delaware, where it again turns northeast. Beginning its path to Cleveland, I-71 enters the rolling farm country on the edges of the Allegheny Plateau. It continues in this fashion to Lodi/Westfield Center and its junction with I-76. Heading north to Medina, it meets the terminus of I-271. The highway then continues north into urban Cuyahoga County and Cleveland's suburbs, intersecting the Ohio Turnpike/I-80. Passing Cleveland Hopkins International Airport, I-71 meets I-480 and enters Cleveland's west side, continuing on to downtown. It junctions with State Route 176 and terminates at Interstate 90 on the Innerbelt.

Much of Interstate 71 in Ohio was intended to be State Route 1. State Route 1 was originally planned in the 1950s as a second Ohio Turnpike extending southwest to northeast across the state. It was planned to run from Cincinnati to Conneaut and connect with an extension built across the panhandle of Pennsylvania to the New York State Thruway. As the highway was being planned, the Federal Aid Highway Act of 1956 was enacted, and the project was converted from a toll road to a freeway. It was designated as State Route 1, since the Interstate Highway numbering system had not yet been implemented. Portions of the freeway began to be completed and opened in 1959 with the new Interstate Highway funding, and they were marked as State Route 1 as well as with their new Interstate Highway number. Since large gaps existed along the corridor where no freeway had yet been completed, existing two-lane or four-lane highways were also designated as State Route 1 in order to complete the route. 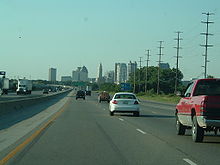 Heading northbound into Columbus from the south

In Columbus, the portion of Interstate 71 that bounds Worthington's eastern edge was originally called the North Freeway. Costing US$13.8 million, it was constructed south from Route 161, arriving at 11th Avenue by August 1961. It took another year to construct the portion between 11th Avenue and 5th Avenue, mainly due to the need to construct a massive underpass under the Pennsylvania Railroad's Grogan Yard. Today, only two tracks cross the viaduct, and the rest of the structure supports a large, weedy field. By August 1962, the freeway had reached Fifth Avenue, and it reached downtown in November 1962.

Upon its completion, I-71 replaced State Route 3 as the primary highway link between Cincinnati, Columbus, and Cleveland.

Recently, the interchange at milepost 121 north of Columbus was reconstructed to allow access to the eastern extension of Gemini Place. Before that, it was a simple diamond interchange with Polaris Parkway (Ohio State Route 750).

Sports rivalries involving cities on I-71