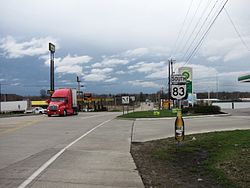 A portion of State Route 83 is part of the Morgan County Scenic Byway.