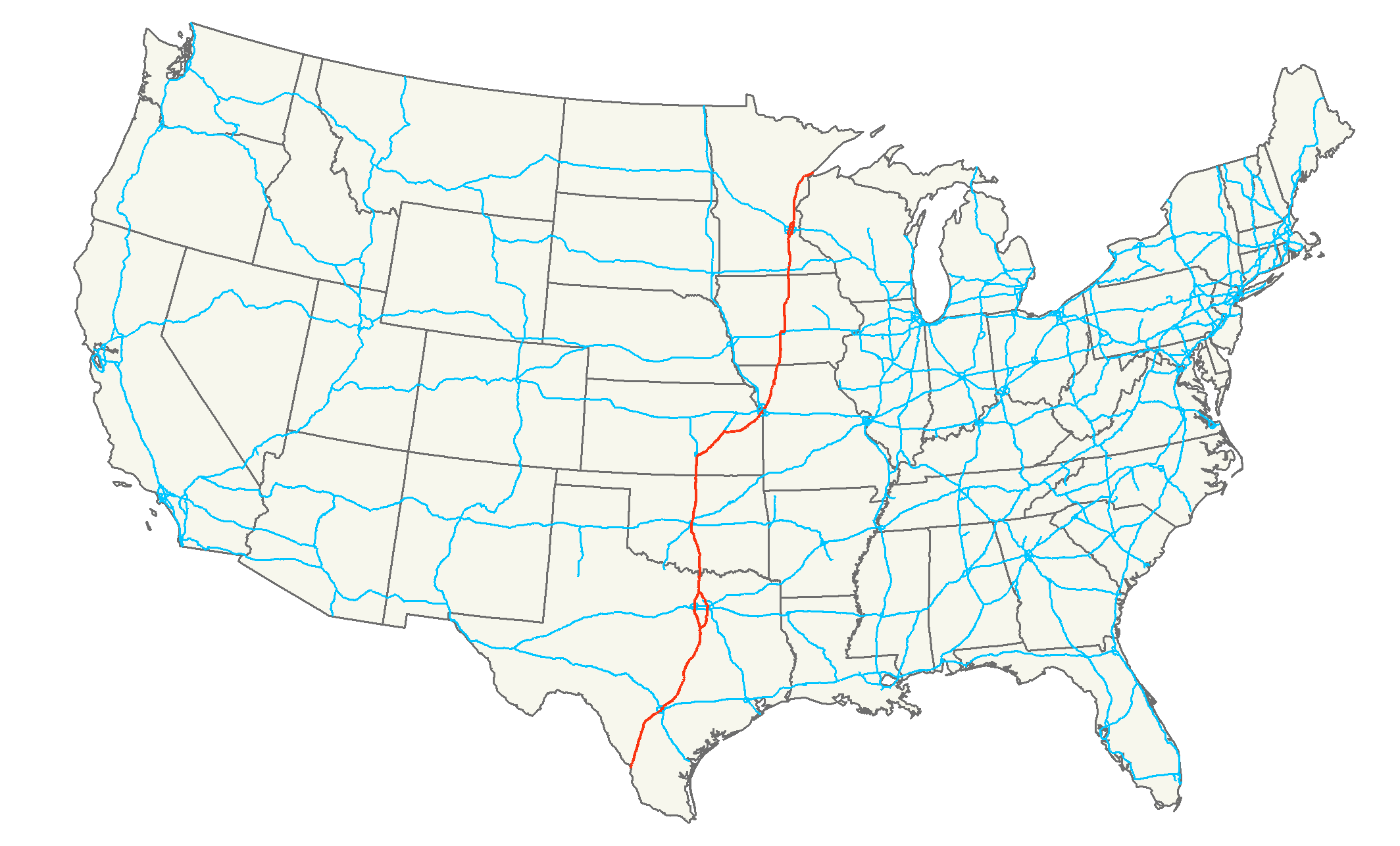 Interstate 35 does not directly connect to either international border. I-35's southern terminus is a in Laredo, , just short of the . Travelers going south can take one of two toll bridges across the and the Mexican border—straight ahead into , or via Interstate 35 Business through downtown Laredo into . To the north, I-35 terminates in Duluth, , with connections to Canada from the interstate's terminus via Minnesota Highway 61 to Grand Portage, or north to the border at International Falls by in Duluth, but that route is more typically accessed from the south by Minnesota Highway 33 at Cloquet.

Interstate 35 northbound begins at an intersection (controlled by a stoplight) with Business Spur I-35 in Laredo, Texas, just north of the . Through Webb, La Salle, and Frio Counties, it has a mostly north-northeastern course, turning more northeast around Moore.

Interstate 35 is named the Pan Am Expressway in San Antonio. There, it has brief concurrencies with both and , and serves as the northern terminus of . I-35 heads northward out of the city towards the state capital, Austin.

In Austin, Interstate 35 is the Interregional Highway.

I-35 then heads to Hillsboro, where it splits up into I-35W and I-35E and runs through the Dallas/Fort Worth area. The official mile markers follow I-35E through Dallas—I-35W, which is convert|85|mi|km in length, carries its own mileage from Hillsboro to Denton, as though it were an x35 loop. In Dallas, I-35 is the R.L. Thornton Freeway south of I-30, which picks up the name heading east. North of I-30, it is the Stemmons Freeway.

After passing through D/FW, I-35's two forks merge in Denton. The unified interstate then continues north to Gainesville before crossing the Red River into Oklahoma.

In Oklahoma, I-35 runs from the Red River at the Texas border to the Kansas line near Braman, passing through many of the state's major cities, including Ardmore and the cities of the such as Norman, Guthrie, Edmond, and the state capital and largest city, Oklahoma City. In , I-35 has a major junction with I-40 and spurs into through the north central inner city.

Between the Oklahoma state line and Emporia, I-35 is part of the . This section of interstate serves Wichita and passes through the area. At Emporia, I-35 branches off on its own alignment. This free section of I-35 provides access to Ottawa before entering the , where it serves Johnson County, and .

In the southern sections of the state, I-35 is parallel to , for much of its course. The highway runs mostly on a north alignment.

In Des Moines, I-35 has a convert|12|mi|km|sing=on overlap with I-80. The concurrency takes place northwest of the downtown district of the city. At exit 127 of I-80, the overlap turns east and terminates at exit 137 via an interchange with Interstate 235.

North of Des Moines, I-35 is mainly parallel with US 69, traversing a vast and rural area of Iowa. [cite map|title=Motor Carriers' Road Atlas|publisher=|page=38|edition=Deluxe|year=2007|accessdate=2007-07-07]

The Minnesota section of Interstate 35 and Interstate 35W respectively are defined as s 390 and 394 in Minnesota Statutes § 161.12(2). [http://ros.leg.mn/bin/getpub.php?pubtype=STAT_CHAP_SEC&year=2006&section=161.12] The roads are not marked with those numbers. All of I-35 in the state of Minnesota from the Iowa state line to Duluth is named the Red Bull Highway, after the 34th Infantry (Red Bull) Division.

At Medford, , the on/off ramps lead to s rather than standard cross intersections. [Federal Highway Administration. [http://www.tfhrc.gov/focus/sep04/05.htm "Focus: Accelerating Infrastructure Innovations."] URL accessed 02:47, February 12, 2006 (UTC).] This is the first site in the state linked to a major highway to use roundabouts.

On I-35E in Minnesota between Minnesota State Highway 5 and Interstate 94, in both directions, trucks weighing more than 9,000 lbs (4,082 kg) are banned from the freeway, and the speed limit drops to 45 mph (70 km/h) but it is rarely obeyed. This section was not completed until the late 1980s (although the route was cleared and graded earlier) due to opposition from the historic Crocus Hill neighborhood, which sits only a few hundred feet from the alignment. The four-lane alignment, "parkway" design was a compromise. The truck bypass for this section is signed on I-494 and I-694 to the east of Saint Paul.

Some sections of I-35 in Oklahoma City were already built in 1953, before the Interstate system was created. Through Norman, , the interstate opened in June 1959. In Moore, it opened in two parts: the northern half, connecting Moore to Oklahoma City, opened in January 1960. The southern half, linking it to Norman, was opened to traffic in June 1967.

I-35 through Oklahoma largely parallels . This is in large part due to efforts of the towns of Wynnewood, Paoli, and Wayne, which fought to keep I-35 as close as possible to U.S. 77. This was successful due to a threat from Governor to build a toll road rather than I-35, and legislation preventing state funds for the interstate from being spent if it were more than convert|1|mi|km|sing=on from the U.S. route. [McNichol, Dan. "The Roads that Built America: The Incredible Story of the U.S. Interstate System". New York: Sterling Publishing Co., Inc., 2006. ISBN 1-4027-3468-9]

I-35 was completed in Oklahoma in 1971, when parts of the interstate running through Carter Co. and Murray Co. were opened to traffic.

The final segment of I-35 (as originally planned) to open was in north central , between Mason City and near Iowa Falls. This segment was delayed due to some controversy. Originally, I-35 was to follow the alignment of from Des Moines all the way to the border. However, Mason City's business community lobbied for the route to be moved closer to their city. On September 1, 1965, the alignment was changed to instead parallel through northern Iowa, which brought the highway much closer to Mason City. This, however, created a long diagonal section through Wright and Franklin counties. Local farmers objected to their farms being bisected into triangular pieces, and resulting litigation delayed I-35 for several years. A November 1972 ruling rejected a lawsuit filed by the farmers, and the final segment of I-35 was allowed to proceed, eventually opening in 1975. One of the final pieces of the highway puzzle happened in Faribault, . For approximately 25 years, Highway 35 actually went through the town and travellers had to deal with several traffic lights. In 1975, the highway went around Faribault where today a traveler actually has three exit choices for this southern Minnesota town.

On September 1, 2005, MoDOT reopened the over the in Kansas City, Missouri after completing a six-month rehabilitation project ahead of schedule. However, the rehab project is only a short-term fix; MoDOT is in the planning process of devising a six- to eight-lane crossing for the interstate, either by building a duplicate bridge to house one direction of traffic or a new bridge or bridges. The $245 million project includes $50 million in funding procured by Senator in the 2005 Transportation Bill. Project plans include significant updates to sections of the freeway and nearby interchanges beyond the bridge itself.

The proposed toll-road project includes one proposal (TTC-35) to primarily parallel I-35 from the Mexico border up to the Oklahoma border. [ Study Site, I-35 Corridor Section: [http://www.keeptexasmoving.com/projects/ttc35/ "http://www.keeptexasmoving.com/projects/ttc35/"] ] There are major disagreements as to what impact this parallel route would have on I-35 in terms of traffic, maintenance, and commerce.

The Trans-Texas Corridor was first proposed by Texas Governor in 2002. It consists of a 1,200 foot (366 m) wide highway that also carries utilities such as electricity, petroleum and water as well as railway track and fiber-optic cables.