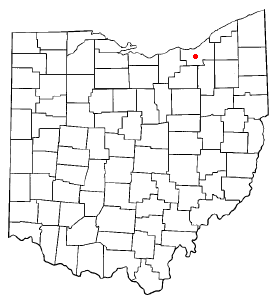 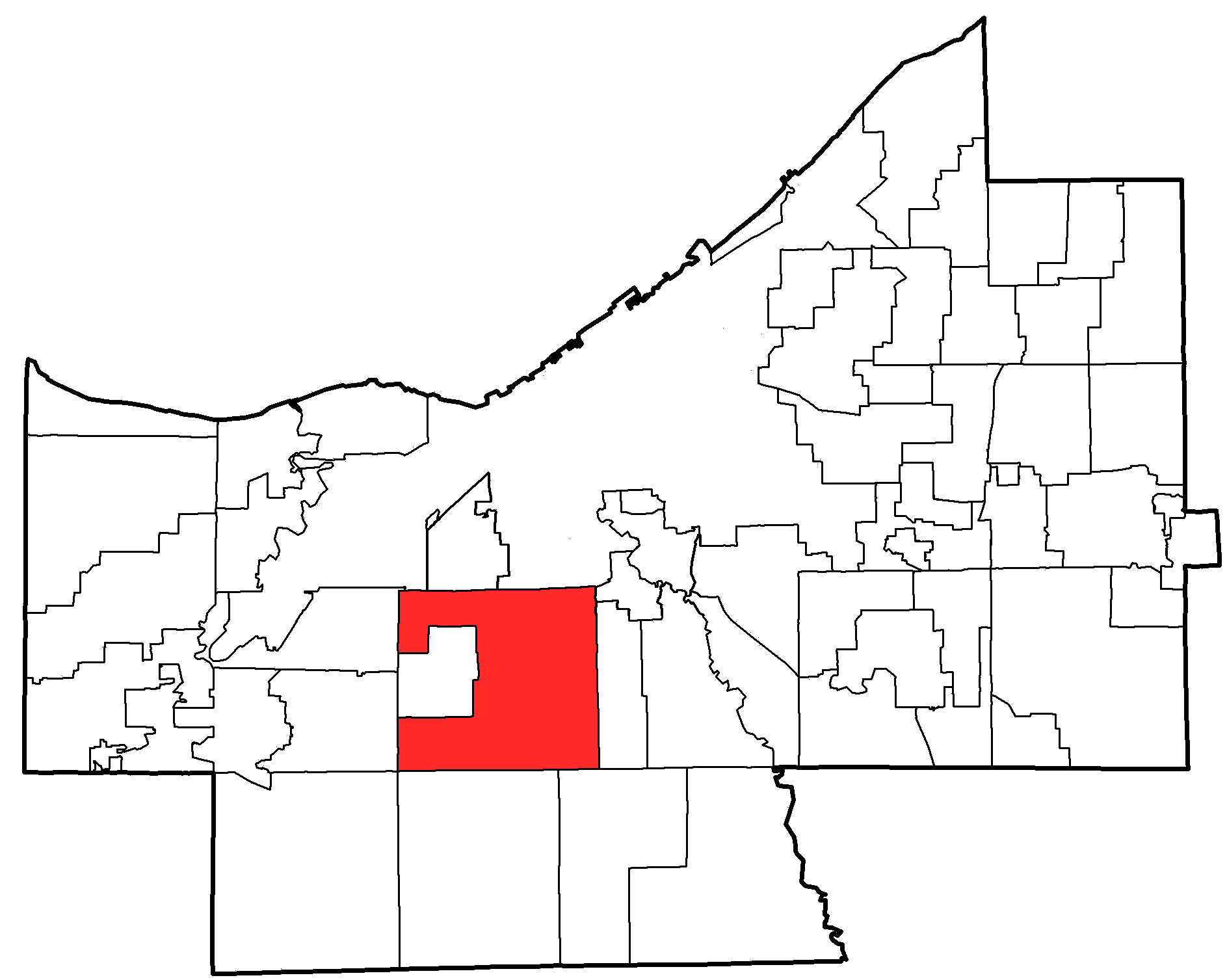 Parma is a city southwest of Cleveland. It is bounded by Cleveland and Brooklyn on the north, Brooklyn Heights, and Seven Hills on the east, North Royalton and Broadview Heights on the south, and Brook Park, Middleburg Heights, and Parma Heights on the west. Parma was originally part of Parma Township, created in 1826. The first settlers were the Benaiah Fay family from New York State, who settled along the Cleveland-Columbus Road in 1816. The name was taken from Parma, New York, where it was probably derived from the early-19th century fascination with classical Italy. During the 19th century, Parma remained largely agricultural. In 1912, a portion of the township seceded to form the village of Parma Heights. In 1924, Parma was incorporated as a village, and in 1926 it adopted the mayor-council form of government. In 1931 a proposition to annex it to the city of Cleveland was defeated, and Parma became a city. Parma's tremendous growth came after World War II as young families began moving from Cleveland into the Suburbs. During the Cold War, Parma's Nike Site Park housed s located in underground silos. [ [http://www.sunnews.com/news/1999/0603/stanks.htm EPA checks for hazards at former Nike site] ] [ [http://www.archives.gov/great-lakes/chicago/finding-aids/nike-missile-sites.html Records Relating to Nike Missile Sites at the National Archives and Records Administration-Great Lakes Region] ] Between 1950 and 1980, Parma's population soared from less than 20,000 to more than 110,000. [Kubasek, Ernest R., The History of Parma (1976). Parma Chamber of Commerce, Parma (1984). Parma Sesquicentennial, 1826-1976] More recently, the population has declined to well below 90,000. [ [http://factfinder.census.gov/servlet/SAFFPopulation?_event=ChangeGeoContext&geo_id=16000US3961000&_geoContext=&_street=&_county=Parma&_cityTown=Parma&_state=04000US39&_zip=&_lang=en&_sse=on&ActiveGeoDiv=&_useEV=&pctxt=fph&pgsl=010&_submenuId=population_0&ds_name=null&_ci_nbr=null&qr_name=null&reg=null%3Anull&_keyword=&_industry= The 2006 population estimate for Parma city, Ohio is 80,009.] ]

Parma was, throughout the 1960s and 1970s, the butt of jokes by local movie show hosts , Hoolihan & Big Chuck, and The Ghoul, due to its Eastern European, most specifically Polish, make-up. Ghoulardi famously made a series of shorts called "Parma Place." The jokes dealt with Parmans' alleged love of white socks, pink flamingos, chrome balls, kielbasa and pierogis and the polka. [ [http://www.cleveland.com/tv/index.ssf?/tv/more/latenight/parma.html The Ghoul Power Page: Parma's Revenge] ]

Perhaps more seriously, Parma's local, state, and even national image has been marred by four incidents:

:2. In 2003, Parma made national news after a 345-kV transmission line failed in the city due to a tree, which played a significant role in the early stages of the . [ [http://www.cleveland.com/blackout/index.ssf?/blackout/more/1061544752165110.html "Lights out again - some on purpose" by Donna Iacoboni] , URL accessed on , ] A major water crisis in Parma and nearby communities also resulted from the blackout. [ [http://www.awwa.org/Communications/mainstream/2003/Oct/index.cfm website features a photograph with the citation: "The National Guard supplied water to Parma City, Ohio, and other communities Aug. 15, 2003, after a massive blackout disrupted clean drinking water supplies."] , URL accessed on , ]

:3. According to the official website of the Cuyahoga County Common Pleas Court, since 1998 the city has been engaged in an ongoing (i.e. still active) and costly civil suit pitting seventeen Parma residents as plaintiffs against around a dozen prominent city officials (including the current mayor and council president) as defendants. Most recently, the case titled "Michael Perry et al vs. Parma, City of-et al", held a pre-trial on March 9, 2007, but the "defendant" failed to appear. Thus, the parties were to have contacted the court by telephone on The Ides of March of 2007. A new pretrial is set for July 31, 2007 at 9:45 AM. [ [http://cpdocket.cp.cuyahogacounty.us/p_PickSearch.aspx For the official and detailed information on this case, do a civil search on this government website for either "Michael Perry" or "Parma, City of"] , URL accessed on , ]

:4. Parma has recently been plagued by negative press in the local media as a result of a larger conflict between the police and city government, which has some of its origins from an on-and-off investigation into whether or not former Republican Councilman John Stover stole "files from another council member's briefcase" in 2000--allegations that the Stover family disputes. [ [http://www.connectionmagazine.org/2002_06/ts_ambassadors.htm "Parma and Madison Councilmen Are Ambassadors For Truth" - article that provides additional background information on John Stover] ] The incident, which has been referred to as "Filegate" by local and regional media sources, has thus far had inconclusive results, but many residents and outside observers have interpreted the escalation in tensions between the police department and city government as one of reprisals and counter-reprisals of which "Filegate" may serve as an early salvo. [ [http://www.cleveland.com/parmapolice/index.ssf?/parmapolice/more/104729732388160.html "Extended medical leave, unquestioned by officials, paves way to retirement" - article cites "Filegate" twice] ]

A possible fifth incident that has marred Parma's image in the recent past involves tensions between the local media and city government on one side and the police department on the other.

Those who believe in the existence of a Parma led by Prosecutor Bill Mason contend that in order to distract from their own suspect activities, "" politicians allegedly concocted a "Witch Hunt" that scapegoated police officers. [ [http://www.freetimes.com/modules.php?op=modload&name=News&file=article&sid=423 Debbie Lime takes on Dean DePiero for mayor - and Bill Mason and Parma's political establishment] ] [ [http://www.ohiochamber.com/governmental/edge_050903.asp "DePiero and Cuyahoga County Prosecutor Bill Mason control what is referred to as the “Parma Democratic machine,” and Lime – elected to council as a Democrat – is running as an anti-machine Democrat."] ] [ [http://www.parmaward6.com/docs/Good-Old-Boys.htm Parma Good Old Boys] ] In Spring 2003, the police chief retired and "said city officials need to make peace." [ [http://www.cleveland.com/parmapolice/index.ssf?/parmapolice/more/1053509744102760.html Parma police chief retires unexpectedly] ] During the investigation, police union representatives appealed to the public through the media to end the investigation. [ [http://maxpages.com/zar/Letter_To_All_Union_Police An Open Letter To All Union Police Officers] -- Original version.] [ [http://www.opba.com/letter_union_pos.htm An Open Letter to all Union Police Officers] -- Published version] [ [http://maxpages.com/zar/Parma_Police_FOP_Press_Release AN OPEN LETTER TO THE MEDIA BY PARMA POLICE SUPERVISORS FOP REPRESENTATIVES] ] A councilman who supported the police also received praise by residents in the press. [ [http://maxpages.com/zar/In_Praise_of_Councilman_Drabik Councilman praised for supporting police] ]

Ultimately, investigator Dick DiCicco wrote in his official report that there “was no evidence presented to” substantiate “the allegation that officers were taking turns calling in sick in order that other officers could earn overtime to maintain minimums,” “there was no actual duplicate billing” concerning Sgt. Joe Kuchler and Ptl. John Robertson as indicated in "The Plain Dealer" articles, and based “on the review of the above activity no specific pattern of reciprocity was detected” on the part of Officer Mekruit. On page B2 of "The Plain Dealer", Joe Wagner quoted Prosecutor Michael Nolan as reportedly declaring that Mayor DePiero and Council President Germana removed the “police tax request from May 3 ballot . . . ‘as an excuse for, apparently, their own inaction.’” In turn, on March 11, 2005, The "Plain Dealer" quoted Councilwoman Stys who summed up the investigation as a “sham,” and on January 12, 2006, prosecutor Dan Kasaris recommended that the case of The State of Ohio vs. Donald Mcnea, a retired Parma police officer who served as a focus of numerous newspaper articles, be dismissed. Further revelations about the "Witch Hunt", as found in such newspaper articles as "Report clears Parma police in payroll-padding probe," and including the retroactive appointment of a special prosecutor who had been prosecuting (in violation of the Ohio Revised Code) select police union representatives who had raised concerns about possible political corruption, has led to calls for the resignations of many members of the current mayoral administration and city council. As confirmed on the county website, most recently, on February 26, 2007, Judge found Patrolman Brian Barta not guilty of bribery. [ [http://cpdocket.cp.cuyahogacounty.us/p_PickSearch.aspx For the official and detailed information on this case, do a criminal search on this government website for "Brian Barta"] , URL accessed on , ] Officer Barta was earlier discharged of charges of obstructing justice, [ [http://cpdocket.cp.cuyahogacounty.us/p_PickSearch.aspx For the official and detailed information on this case, again, do a criminal search on this government website for "Brian Barta"] , URL accessed on , ] with the judge citing the fact that the prosecution's witness "skipped court appearances" and was "twice arrested and convicted, for drug trafficking and possession." [ [http://blog.cleveland.com/metro/2007/02/parma_officers_cleared_of_brib.html "Parma officer cleared of bribery, obstruction charges" by Jim Nichols, February 26, 2007] ] According to "The Plain Dealer", attorney Henry Hillow said that Barta "should have never been charged" and called Barta's experience "a travesty." [Nichols, Jim. "The Plain Dealer", 26 February, 2007. Retrieved 15 March, 2007.] Nevertheless, the long-term consequences of the crisis, which lasted for nearly four years (2003-2007) have yet to be seen.

Two major changes and developments have recently occurred regarding several principal sites within the city:
#The West Creek Preservation Agency has worked to preserve various historic and natural sites in the city, including the Henninger House and the West Creek Watershed. [ [http://www.westcreek.org/ Welcome to West Creek!] ]
#Henninger House, the oldest home in Parma, which was built in 1849, is planned to be part of the proposed Quarry Creek Historic District. [ [http://www.tpl.org/tier3_cd.cfm?content_item_id=11500&folder_id=251 Historic Henninger House Saved (OH)] ]

During the population boom between 1950 and 1980, Parma's commercial sector grew to match its residential sector. Since the 1950s, Parma has fostered the growth of many small businesses and been an operating hub for such well-known companies as , the Research Center, and Television.

Located close to the city's town hall is , which is the location of the .

The city contains two public high schools: , and . , though part of the same district, is located in . The schools share a common stadium for football and track events, called Byers Field. The rivalry that exists between these schools is well documented.

The city also is home to a private Catholic high school, . Founded in 1961 as a school for boys, Padua Franciscan became co-educational in 1983 and as of 2005 was the largest private, co-educational secondary school in northeast Ohio. [cite web|url=http://www.ohsaa.org/members/hsenroll05.htm|title=www.ohsaa.org/members/hsenroll05.htm OHSAA enrollment figures|accessdate=2007-03-07] Padua's principal rivalry is with , located in nearby Parma Heights. [ [http://www.cleveland.com/weblogs/hsgridiron/index.ssf?/mtlogs/cleve_hsgridiron/archives/2006_10.html "Holy Name (5-4) vs. Padua (6-3)" - article discusses how their game, called "Holy War Jr.", "is more about area bragging rights and pride."] ]

Parma is the location of most of the Cleveland area's television and FM radio transmission towers.

When Cleveland started to get television service in the late 1940s, -TV (Channel 5), the first television station in Ohio, picked a site on State Road. At the time, Parma was transitioning from a rural enclave to an urban area. Parma was selected for its high elevation. At almost 1,100 feet above sea level, it is 500 feet higher than downtown Cleveland. Other local stations followed, and nearly all local TV and FM radio outlets broadcast from Parma, or from other nearby suburbs.

The television towers are taller than downtown Cleveland's tallest buildings, and can be seen from great distance in Cleveland, and most of its southern suburbs. Airline pilots and broadcast experts call the collection of towers in and near Parma the Cleveland area's "antenna farm".