Interstate 66
This article is about the current Interstate 66 in Virginia and the District of Columbia. For the proposed route in Kentucky and West Virginia, see Interstate 66 (west).

The E Street Expressway is a spur from Interstate 66 into the Foggy Bottom neighborhood of Washington, D.C. 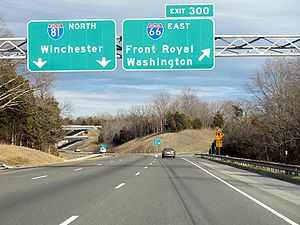 I-66's western terminus, where it splits from I-81 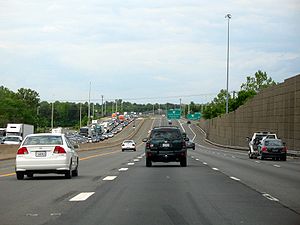 Rush hour traffic on I-66 westbound in Fairfax County

Because I-66 is the only Interstate Highway running west from Washington, D.C., into Northern Virginia, traffic on the road is often extremely heavy. For decades, there has been talk of widening I-66 from 2 to 3 lanes each way inside the Capital Beltway (Interstate 495) through Arlington, Virginia, although many Arlington residents are adamantly opposed to this plan.

In 2005, the Virginia Department of Transportation (VDOT) studied the prospect of implementing a one-lane-plus-shoulder extension on westbound I-66 within the Beltway (in an attempt to reduce congestion for people commuting away from D.C.).[4]

In the summer of 2010, construction began on a third lane and a 12-foot shoulder lane between the Fairfax Drive ramp near the George Mason Drive entrance ramp to I-66 west and the Sycamore Street ramp, a 1.9 mile distance. The entrance ramp acceleration lane and the exit ramp deceleration lane are being lengthened until they meet to form a continuous lane between both ramps. The 12-foot shoulder lane will carry emergency vehicles and can be used in emergency situations. This project is scheduled for completion in December 2011.[5]

The Orange Line and the Silver Line (under construction) of the Washington Metro operate in the median of the highway in Fairfax and Arlington counties. Four stations (Vienna, Dunn Loring, West Falls Church, and East Falls Church) are located along this segment of I-66.

I-66 east has two exit ramps, one from each side of the highway, to the Inner Loop of I-495 heading northbound. One is a two lane right exit which merges down to one lane halfway along the ramp, while a second exit ramp is a left exit; the latter reserved for use by high-occupancy vehicle (HOV) traffic during morning rush hour, but open to all traffic excluding trucks at all other times. Both exit ramps for the Inner Loop merge prior to merging from the left with the Inner Loop. There is no access from the Outer Loop of I-495 to I-66 east; traffic wishing to make this movement must use State Route 267 east.

I-66 east also has two exits, one from each side of the highway, to the Outer Loop of I-495. One is a right exit, while one is a left exit; the latter shares a ramp with the exit to the Inner Loop of I-495.

Due to heavy commuter traffic, I-66 features a variety of high-occupancy vehicle (HOV) restrictions. Between US 29 in Gainesville, Virginia and the Capital Beltway, the left lane on eastbound I-66 is reserved for vehicles with two or more occupants (HOV-2 traffic) from 5:30 to 9:30 a.m., and the left lane on westbound I-66 is reserved for HOV-2 traffic from 3:00 to 7:00 p.m. The eastbound shoulder lane (far right lane) between US 50 in Fairfax, Virginia and the Beltway is open to all traffic from 5:30 to 11:00 a.m. The westbound shoulder lane (far right lane), also between the Capital Beltway and U.S. Route 50, is open to all traffic from 2:00 to 8:00 p.m.[7]

Between the Beltway and the Theodore Roosevelt Bridge, the entire eastbound (inbound) roadway is reserved for HOV-2 and Washington Dulles International Airport traffic from 6:30 to 9:00 a.m., and the entire westbound (outbound) roadway is reserved for HOV-2 and Dulles Airport traffic from 4:00 to 6:30 p.m. This is enforced by random police presence on the on- and off-ramps, because single-passenger vehicles are allowed to enter the highway inside the Beltway in the direction of rush-hour traffic when they intend to use the Dulles Access Road at exit 67. Police heavily monitor the three-mile stretch between the Dulles Access Road and the Beltway for violations, frequently having traffic slow down to visually inspect inside each vehicle.[8]

Both motorcycles and qualified "clean special fuel" vehicles are permitted to use HOV-2 facilities on I-66 during times when HOV regulations are in effect even without the required number of occupants. The "clean special fuel" designation is used primarily by hybrid vehicles, but is also available for vehicles using alternative fuels such as natural gas or electricity.[9] To qualify for the HOV exemption, a vehicle owner must specifically request the designation when registering the vehicle, pay the appropriate fees, and display a "clean special fuel" license plate. The clean-fuel exemption is scheduled to expire on June 30, 2012, although the Virginia General Assembly has extended the exemption every year, one year at a time, since it was originally designated to expire in 2006.[10] However, in 2011, the exemption was modified so it applies only to clean fuel vehicles registered before June 30, 2011. Clean-fuel vehicles registered after that date are not exempt from HOV regulations on I-66.[11]

As of January 28, 2011, penalties for HOV violators range from $125 on the first offense to $250 on the second offense, $500 on the third offense, and $1,000 on the fourth offense. Violators also receive three points on their driving record on the second and later offenses.[12]

In Washington D.C., I-66 follows the West Leg of the Inner Loop freeway. After crossing the Potomac River on the Theodore Roosevelt Bridge concurrent with US 50, the route quickly turns north, separating from US 50. The highway interchanges with the E Street Expressway spur before passing beneath Virginia Avenue in a short tunnel. After an indirect interchange with the Rock Creek Parkway (via 27th Street), the highway terminates at a pair of ramps leading to the Whitehurst Freeway (US 29) and L Street.

This is the only 2 digit Interstate to enter the District of Columbia, other than the 100 yards (91 m) or so that I-95 passes through DC on the Woodrow Wilson Bridge (part of the Capital Beltway).

The eastern terminus of the E Street Expressway is at 20th Street NW. From there, traffic continues along E Street NW to 17th Street NW near the White House, the Old Executive Office Building, and the Corcoran Gallery of Art. Westbound traffic from 17th Street takes a one-block segment of New York Avenue to the expressway entrance at 20th and E Streets. The expressway and the connecting portions of E Street and New York Avenue are part of the National Highway System. 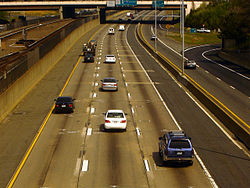 Interstate 66 in Fairfax County outside of the Capital Beltway, with the Metrorail Orange Line in the median. The left lane is HOV, and the right shoulder is used as a travel lane during rush hour.

As with many urban Interstate Highway projects, I-66 has encountered opposition from local citizen groups.

Most notably for I-66 was the construction through Arlington, Virginia, proposed in 1956. After the Virginia Department of Transportation (VDOT) (then known as the Virginia Department of Highways) acquired two sections of the former route of the Washington and Old Dominion Railroad to provide a right-of-way through Arlington for the new highway, the Arlington Coalition on Transportation (ACT) filed a lawsuit in Federal District Court in 1971 opposing the Arlington portion of the project. The group objected to that urban segment due to concerns over air quality, noise and community cohesion changes. In 1972 the U.S. Fourth Circuit Court of Appeals ruled in favor of ACT, technically blocking any construction. The U.S. Supreme Court upheld the ruling in favor of ACT later in 1972.[13] 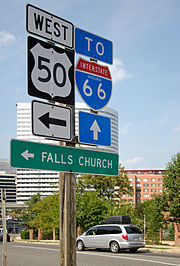 The impasse was eventually broken when the parties agreed on experts to conduct air quality and noise studies for VDOT; the firm of ESL Inc., the expert hired originally by ACT, was agreed upon to be hired by VDOT. Then, U.S. Secretary of Transportation Coleman personally intervened in 1976 with negotiations to reach a compromise of a reduced highway width including a transit element.[14][15]

Less controversial was the portion of the highway's route immediately west of Arlington. There, VDOT decided to curve the highway to bypass the City of Falls Church, increasing the highway's length while sparing the city from the road's immediate environmental impacts.

In Gainesville, Virginia, the Gainesville Interchange Project is taking place at and near the interchange between US 29 and I-66, aiming to upgrade facilities for those and many other roads due to rapid development and accompanying heavy traffic in the Gainesville and Haymarket area. I-66's overpasses were reconstructed to accommodate nine lanes (six general purpose, two HOV, one collector-distributor eastbound) and lengthened for the expansion of US 29 to six lanes. These alterations were completed in June 2010. US 29 is also planned to be largely grade-separated in the area, including an interchange at its current intersection with SR 619 (Linton Hall Road); land for this has been acquired. The project overall began in 2004 and completion is slated for late 2014.[16]

A map of I-66, showing cities and intersections with other interstates.

In Washington D.C., I-66 was planned to extend east of its current terminus along the North Leg of the Inner Loop freeway. I-66 would have also met the eastern terminus of a planned Interstate 266 at US 29, and the western terminus of the South Leg Freeway (I-695) at US 50; I-266 would have been a parallel route to I-66, providing more direct access to the North Leg from points west, while I-695 would have been an inner-city connector between I-66 and I-95.

The final plans for the North Leg Freeway, as published in 1971, outlined a 1.5-mile (2.4 km) six-lane tunnel beneath K Street, between I-266/US 29 and New York Avenue, where the North Leg would emerge from the tunnel and join with the Center Leg Freeway (formerly I-95, now I-395); the two routes would run concurrently for three-fourths of a mile before reaching the Union Station interchange, where I-66 was planned to terminate. Despite the plan to route the North Leg in a tunnel beneath K Street, the intense opposition to previous, scrapped alignments for the D.C. freeway network, which included previous alignments for the North Leg Freeway, led to the mass cancellation of all unbuilt D.C. freeways in 1977, resulting in the truncation of I-66 at US 29.

Interstate 266 (I-266) was a proposed loop route of I-66 between Washington, D.C., and Arlington County, Virginia. District of Columbia officials proposed designating the route Interstate 66N, a move opposed by the American Association of State Highway and Transportation Officials. In Virginia, Interstate 266 would have split off from Interstate 66 just east of the present Spout Run Parkway exit. From there, it would have followed an expanded Spout Run Parkway, crossed the George Washington Memorial Parkway, and crossed the Potomac River across a new bridge that would have been called the Three Sisters Bridge. Upon entering the District of Columbia, it would have followed Canal Road and an expanded Whitehurst Freeway to rejoin Interstate 66 at K Street. Interstate 266 was canceled in 1972 in the face of community opposition during Washington's "freeway revolts".[1][2]