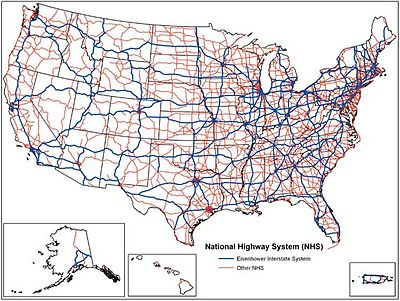 The National Highway System (NHS) is a network of strategic highways within the United States, including the Interstate Highway System and other roads serving major airports, ports, rail or truck terminals, railway stations, pipeline terminals and other strategic transport facilities.

Individual states are encouraged to focus federal funds on improving the efficiency and safety of this network which makes up 4% of the nation's roads, but carries 40% of the traffic and 75% of heavy truck traffic. About 90% of America's population lives within 5 miles (8.0 km) of an NHS road. The roads within the system were identified by the United States Department of Transportation in cooperation with the states, local officials, and metropolitan planning organizations and approved by the United States Congress in 1995.

The Intermodal Surface Transportation Efficiency Act of 1991 provided that certain key routes such as the Interstate Highway System, be included.[citation needed]

The United States Congress approved the NHS in 1995 by passing the National Highway System Designation Act.

A map of the Strategic Highway Network, one component of the NHS.