Psilocybe cubensis is a species of psychedelic mushroom whose principal active compounds are psilocybin and psilocin. Commonly called Boomers, Cubes or Gold Caps, it belongs to the Strophariaceae family of fungi and was previously known as Stropharia cubensis.

The species was first described in 1906 as Stropharia cubensis by Franklin Sumner Earle in Cuba.[1] In 1907 it was identified as Naematoloma caerulescens in Tonkin by Narcisse Théophile Patouillard,[2] while in 1941 it was called Stropharia cyanescens by William Alphonso Murrill in Florida.[3] These synonyms were later assigned to the species Psilocybe cubensis.[4][5]

The name Psilocybe is derived from the Greek roots psilos (ψιλος) and kubê (κυβη),[6] and translates as "bald head". Cubensis means "coming from Cuba", and refers to Cuba, the type locality published by Earle.

It is in the section Cubensae, other mushrooms of this section include Psilocybe subcubensis.

Psilocybe cubensis is probably the most widely known of the psilocybin containing mushrooms used. Its major psychoactive compounds are:

Individual brain chemistry and psychological predisposition play a significant role in determining appropriate doses. For a modest psychedelic effect, a minimum of one gram of dried Psilocybe cubensis mushrooms is ingested orally. 0.25–1 gram is usually sufficient to produce a mild effect, 1–2.5 grams usually provides a moderate effect. 2.5 grams and higher usually produces strong effects.[9] For most people, 3.5 dried grams (1/8 oz) would be considered a high dose and may produce an intense experience; although, typically this is considered a standard dose. For many individuals doses above 3 grams may be overwhelming. For a few rare people, doses as small as 0.25 grams can produce full-blown effects normally associated with very high doses. For most people, however, that dose level would result in virtually no effects. Due to factors such as age and storage method, the psilocybin content of a given sample of mushrooms will vary. Therefore, some users prefer to use a formula or dosage calculator [10] to tailor the dosage to the level they wish to experience.

Effects usually start after approximately 20–60 minutes (depending on method of ingestion and stomach contents) and may last from four to ten hours, depending on dosage. Visual distortions often occur, including walls that seem to breathe, a vivid enhancement of colors and the animation of organic shapes. At higher doses, experiences tend to be less social and more entheogenic, often intense and spiritual in nature.

It is nearly impossible to overdose on psilocybin mushrooms since one would have to consume several dozen pounds of dried mushrooms.[11] Nevertheless, the effects of very high doses can be overwhelming depending on the particular strain, growth method, age at harvest and the individual. Psilocybe cubensis mushrooms can come in rather different sizes. It is recommended that one weigh the actual mushrooms, as opposed to simply counting them. People taking MAOIs need to be careful, as psilocybin and psilocin are metabolized by the enzyme monoamine oxidase. A monoamine oxidase inhibitor reduces the body's ability to metabolize psilocin and psilocybin, greatly increasing the intensity of the experience. This can sometimes produce uncomfortable or undesirably intense experiences. 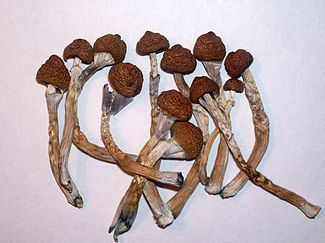 Although there have been limited medical trials due to illegality, the alkaloids in the mushroom, most notably psilocybin along with other psychedelic compounds such as LSD could potentially be a promising treatment for cluster headaches, a chronic and debilitating condition that negatively affects the quality of life of its sufferers.[12]

It is also possible that the mushrooms could be used in psychedelic therapy; one study found that supervised use of these mushrooms could induce a positive mystical experience in participants,[13] which would be desirable in supporting psychotherapy techniques. However, due to its reputation as an illegal substance, its status as a medicine has not yet reached mainstream acceptance.

It is illegal in many countries to possess psilocybin-containing mushrooms or mycelium (which can contain psychoactive substances at certain stages). However, it is legal in most places to own and sell the spores of these mushrooms. In the United States, only the psychoactive compounds (see above) are scheduled under federal law. The spores do not contain either; however, possession of spores is prohibited by state law in Idaho and Georgia; while California does not prohibit their possession, they do have a law specifically preventing possession with intent to produce psilocybin mushrooms.[14]

Personal-scale cultivation of Psilocybe cubensis mushrooms ranges from the relatively simple and small-scale PF Tek and other "cake" methods, that produce a limited amount of mushrooms, to advanced techniques utilizing methods of professional mushroom cultivators, such as Paul Stamets. These advanced methods require a greater investment of time, money, and knowledge, but reward the diligent cultivator with far larger and much more consistent harvests.