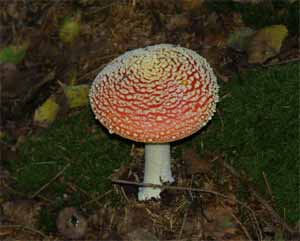 The order Agaricales, also known as gilled mushrooms (for their distinctive gills), or euagarics, contains some of the most familiar types of . The order has about 4,000 identified , or one quarter of all known . They range from the ubiquitous common mushroom to the deadly destroying angel and the hallucinogenic fly agaric to the bioluminescent jack-o-lantern mushroom.

Some notable fungi with gill-like structures, such as s, have long been recognized as being substantially different from usual Agaricales. Interestingly, molecular studies are showing more groups of agarics as being more divergent than previously thought, such as the genera "" and "" belonging to a separate order , and other gilled fungi, including such species as "" and "" showing a closer affinity with s in the order .

Also, some other quite distinctive fungi, the s, and some clavaroid fungi, e.g. "", and the Beefsteak fungus have been recently been shown to lie within the Agaricales.

The term had traditionally referred to Agaricales, which were defined as exactly those fungi with gills. Given the discoveries described above, those two categories are not synonymous (although there is a very large overlap between the two groups).

Agarics are ubiquitous, being found across all continents. Most are terrestrial, their habitats including all types of woodland and grassland, varying largely from one genus to another.

s of the agarics are typically fleshy, with a stipe, often called a stem or stalk, a (or cap) and e (or gills), where s are produced. This is indeed the stereotyped structure of what we would call a .

The agarics' life cycle is very much representative of the basidiomycetes. s are present in the s of many species. The agarics always have their basidiospores ejected from the into the area between gill edges. The spores are then let fall to the ground or carried by the wind.