Minocycline (INN) is a broad-spectrum tetracycline antibiotic, and has a broader spectrum than the other members of the group. It is a bacteriostatic antibiotic, classified as a long-acting type. As a result of its long half-life it generally has serum levels 2-4 times that of the simple water-soluble tetracyclines (150 mg giving 16 times the activity levels compared to 250 mg of tetracycline at 24–48 hours).

Minocycline was originally discovered by Lederle Laboratories and marketed under the brand name Minocin.[2] 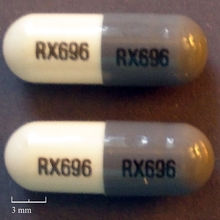 It is primarily used to treat acne and other skin infections as well as Lyme disease as the one pill twice daily 100 mg dosage is far easier for patients than the four times a day required with tetracycline or oxytetracycline.

Although minocycline's broader spectrum of activity, compared to other members of the group, includes activity against Neisseria meningitidis, its use as a prophylaxis is no longer recommended because of side effects (dizziness and vertigo).

It may be used to treat certain strains of MRSA infection and disease caused by drug resistant Acinetobacter.

Minocycline is recognized as a DMARDS (Disease-Modifying Anti-Rheumatic Drug) by the American College of Rheumatology, which recommends its use as a treatment for mild rheumatoid arthritis.

Contrary to most other tetracycline antibiotics (doxycycline excluded), minocycline may be used in renal impairment, but may aggravate systemic lupus erythematosus.[3] It may also trigger or unmask autoimmune hepatitis.[4]

Also, more so than other tetracyclines, minocycline can cause the rare condition of secondary intracranial hypertension which has initial symptoms of headache, visual disturbances, dizziness, vomiting, and confusion. Cerebral edema, as well as autoimmune rheumatoid arthritis are rare side effects to minocycline in some people.[5]

Minocycline's absorption is impaired if taken at the same time of day as calcium or iron supplements. Unlike some of the other tetracycline group antibiotics, it can be taken with calcium-rich foods such as milk, although this does reduce the absorption slightly.[6] Should be taken with plenty of water. If taking this drug, one should avoid prolonged or excessive exposure to direct sunlight. A study published in 2007 mentioned that Minocycline harms ALS patients. Patients on minocycline declined more rapidly than those on placebo. At present the mechanism of this side effect is unknown. According to the researcher from Columbia University the effect does not seem to be dose dependent because the patients on high doses did not do worse than those on the low doses.[7]

Minocycline may cause upset stomach, diarrhea, dizziness, unsteadiness, drowsiness, mouth sores, headache and vomiting. Minocycline increases sensitivity to sunlight. It has also been linked to cases of lupus. Minocycline can reduce the effectiveness of oral contraceptives.[8] Prolonged use of minocycline over an extended period of time can lead to blue-gray skin (permanent blue discoloration of gums) or teeth discoloration. Rare but serious side effects include fever, yellowing of the eyes or skin, stomach pain, sore throat, vision changes, and mental changes, including depersonalization.[9][10]

Minocycline, but not other tetracyclines, can cause vestibular disturbances with dizziness, ataxia, vertigo and tinnitus. This side effect is much more common in women than in men, occurring in 50% to 70% of women receiving minocycline. As a result of the frequency of this bothersome side effect, minocycline is rarely used in female patients.[11]

Symptoms of an allergic reaction include rash, itching, swelling, severe dizziness, and trouble breathing.[9] Minocycline has also been reported to cause idiopathic intracranial hypertension (pseudotumor cerebri).

Thyroid cancer has been reported in the post-marketing setting in association with minocycline products. When minocycline therapy is given over prolonged periods, monitoring for signs of thyroid cancer should be considered.

In 2009, the FDA added minocycline to its Adverse Event Reporting System (AERS); a list of medications under investigation by the FDA for potential safety issues. The AERS cites a potential link between the use of minocycline products and Autoimmune disease in pediatric patients.[12]

In the Journal of the American Medical Association (JAMA), Chris Zink, Janice Clements, and colleagues from Johns Hopkins University reported that minocycline may exhibit neuroprotective action against AIDS Dementia Complex by inhibiting macrophage inflammation and HIV replication in the brain and cerebrospinal fluid.[19] Minocycline may suppress viral replication by reducing T cell activation.[20] The neuroprotective action of minocycline may include its inhibitory effect on 5-lipoxygenase,[21] an inflammatory enzyme associated with brain aging, and the antibiotic is being studied for use in Alzheimer's disease patients.[22] Minocycline may also exert neuroprotective effects independent of its anti-inflammatory properties.[23] Minocycline also has been used as a "last ditch" treatment for toxoplasmosis in AIDS patients. Minocycline is neuroprotective in mouse models of amyotrophic lateral sclerosis (ALS) and Huntington's disease and has been recently shown to stabilize the course of Huntington's disease in humans over a 2-year period.

As an anti-inflammatory, minocycline inhibits apoptosis (cell death) via attenuation of TNF-alpha, downregulating pro-inflammatory cytokine output. This effect is mediated by a direct action of minocycline on the activated T cells and on microglia, which results in the decreased ability of T cells to contact microglia which impairs cytokine production in T cell-microglia signal transduction .[24] Minocycline also inhibits microglial activation, through blockade of NF-kappa B nuclear translocation.

A recent study reported the impact of the antibiotic minocycline on clinical and magnetic resonance imaging (MRI) outcomes and serum immune molecules in MS patients over 24 months of open-label minocycline treatment. Despite a moderately high pretreatment relapse rate in patients in the study prior to treatment, no relapses occurred between months 6 and 24. The only patient with gadolinium-enhancing lesions on MRI at 12 and 24 months was on half-dose minocycline. Levels of interleukin-12 (IL-12), which at high levels might antagonize the proinflammatory IL-12 receptor, were elevated over 18 months of treatment, as were levels of soluble vascular cell adhesion molecule-1 (VCAM-1). The activity of matrix metalloproteinase-9 was decreased by treatment. Clinical and MRI outcomes in this study were supported by systemic immunological changes and call for further investigation of minocycline in MS.[25][26][23][27]

A recent study (2007) found that patients taking 200 mg of minocycline for 5 days within 24 hours of an ischemic stroke showed an improvement in functional state and stroke severity over a period of 3 months compared with patients receiving placebo.[28]

Minocycline is no longer covered by patent and is therefore marketed under several trade names:

StoneBridge Pharma also markets Minocycline as Cleeravue-M in combination with SteriLid eyelid cleanser in the treatment of rosacea blepharitis.