Light therapy or phototherapy (classically referred to as heliotherapy) consists of exposure to daylight or to specific wavelengths of light using lasers, light-emitting diodes, fluorescent lamps, dichroic lamps or very bright, full-spectrum light, usually controlled with various devices. The light is administered for a prescribed amount of time and, in some cases, at a specific time of day.

Common use of the term is associated with the treatment of skin disorders (chiefly psoriasis), sleep disorder and some psychiatric disorders. Light therapy directed at the skin is also used to treat acne vulgaris, eczema and neonatal jaundice. Light therapy which strikes the retina of the eyes is used to treat circadian rhythm disorders such as delayed sleep phase syndrome and can also be used to treat seasonal affective disorder, with some support for its use also with non-seasonal psychiatric disorders.

Other medical applications of light therapy also include pain management, accelerated wound healing, hair growth, improvement in blood properties and blood circulation, and sinus-related diseases and disorders. Many of these use low level laser therapy and red light therapy in the 620–660 nm range.

Many ancient cultures practiced various forms of heliotherapy, including people of the Ancient Greece, ancient egypt, and ancient Rome.[1] The Inca, Assyrian and early German settlers also worshipped the sun as a health bringing deity. Indian medical literature dating to 1500 BC describes a treatment combining herbs with natural sunlight to treat non-pigmented skin areas. Buddhist literature from about 200 AD and 10th-century Chinese documents made similar references.

Faroese physician Niels Finsen is believed to be the father of modern phototherapy. He developed the first artificial light source for this purpose, and used his invention to treat lupus vulgaris. He received the Nobel Prize in Physiology or Medicine in 1903.

Since then a large array of treatments have been developed from the use of controlled light. Though the popular consumer understanding of "light therapy" is associated with treating seasonal affective disorder and skin conditions like psoriasis, other applications include the application of low level laser, red light, near-infrared and ultraviolet lights for pain management, hair growth, skin treatments, accelerated wound healing.

Three percent of the population suffer from psoriasis, and UVB phototherapy has been shown to effectively treat the disease.[2]

A feature of psoriasis is localized inflammation mediated by the immune system. Ultraviolet radiation is known to suppress the immune system and reduce inflammatory responses. Light therapy for skin conditions like psoriasis use UV-A (315–400 nm wavelength) or UV-B (280–315 nm wavelength) light waves. UV-A, combined with a drug taken orally, is known as PUVA treatment.

Sunlight was long known to improve acne, and this was thought to be due to antibacterial and other effects of the ultraviolet spectrum which cannot be used as a long-term treatment due to the likelihood of skin damage.[3]

It was found that some of the visible violet light present in sunlight (in the range 415–430 nm) activates a porphyrin (Coproporphyrin III) in Propionibacterium acnes which damages and ultimately kills the bacteria by releasing singlet oxygen. A total of 320 J/cm2 of light within this range renders the bacteria non-viable.[4]

Since there are few porphyrins naturally found in the skin, the treatment is believed safe except in patients with porphyria;[5] although eye protection is used due to light-sensitive chemicals in the retina. The light is usually created by superluminous LEDs. This form of treatment has been approved by the FDA for some lightwave systems .[citation needed] Overall improvements of on average 76% for 80% of patients occurs over three months; most studies show that it performs better than benzoyl peroxide and the treatment is far better tolerated. However, approximately 10% of users see no improvement.[4]

Phototherapy can be effective in the treatment of Eczema, Atopic Dermatitis, Polymorphous light eruption, Vitiligo, Lichen Planus and Mycosis Fungoides.

Tanning is caused by the effects of two different spectrums of ultraviolet radiation: UV-A and UV-B.

Some case studies[6] have found low-level laser light to be possibly helpful as an adjuctive treatment in wound healing, although a review of the overall scientific literature[7] does not support the use of low-level laser therapy for this purpose.

One of the treatments is using blue light with aminolevulinic acid for the treatment of actinic keratosis. This is not a U.S. FDA-approved treatment for acne vulgaris.[8] 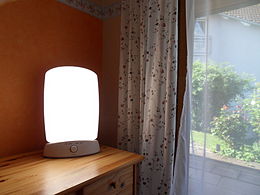 The brightness and color temperature of light from a lightbox are quite similar to daylight.

The production of the hormone melatonin, a sleep regulator, is inhibited by light and permitted by darkness as registered by photosensitive ganglion cells in the retina. To some degree, the reverse is true for serotonin, which has been linked to mood disorders. Hence, for the purpose of manipulating melatonin levels or timing, light boxes providing very specific types of artificial illumination to the retina of the eye are effective.[citation needed]

Light therapy either uses a lightbox which emits up to 10,000 lux of light, much brighter than a customary incandescent lamp, or a lower intensity of specific wavelengths of light from the blue (470 nm) to the green (525 nm) areas of the visible spectrum.[9] Newer light therapy devices use LED technology, making them much smaller and more convenient for users.[10] A 1995 study showed that green light therapy at doses of 350 lux produces melatonin suppression and phase shifts equivalent to 10,000 lux white light therapy[11][12], but another study published in May 2010 suggests that the blue light often used for SAD treatment should perhaps be replaced by green or white illumination, because of a possible involvement of the cones in melatonin suppression.[13]

In treatment, the patient's eyes are to be at a prescribed distance from the light source with the light striking the retina. This does not require looking directly into the light.

The Center for Environmental Therapeutics (www.cet.org) is a nonprofit organization founded in 1994 in response to accelerating international interest in new environmental therapies. The Center is made up of a multidisciplinary team of eminent researchers and clinicians — experts in mental health, ophthalmology and optical physics, electrical engineering, biochemistry, physiology and gerontology — who are committed to pooling their efforts toward the development and application of effective environmental therapies.

While full sunlight is preferred for seasonal affective disorder (SAD)[citation needed], light boxes may be effective for the treatment of the condition. Light boxes for seasonal affective disorder are designed to filter out most UV light, which can cause eye and skin damage.[15] The U.S. Food and Drug Administration has not approved the use of light boxes to treat SAD due to unclear results in clinical trials,[16] but light therapy is still seen as the main form of treatment for SAD.[17] Direct sunlight, reflected into the windows of a home or office by a computer-controlled mirror device called a heliostat, has also been used as a type of light therapy for the treatment of SAD.[18][19]

It is possible that response to light therapy for SAD could be season dependent.[20]

In the management of circadian rhythm disorders such as delayed sleep phase syndrome (DSPS), the timing of light exposure is critical. For DSPS, the light must be provided to the retina as soon after spontaneous awakening as possible to achieve the desired effect, as shown by the phase response curve for light in humans. Some users have reported success with lights that turn on shortly before awakening (dawn simulation). Morning use may also be effective for non-24-hour sleep-wake syndrome, while evening use is recommended for advanced sleep phase syndrome.[25] 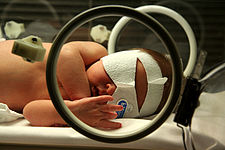 Light therapy is used to treat cases of neonatal jaundice[30] through the isomerization of the bilirubin and consequently transformation into compounds that the newborn can excrete via urine and stools. A common treatment of neonatal jaundice is the Bili light.

Ultraviolet light causes progressive damage to human skin. This is mediated by genetic damage, collagen damage, as well as destruction of vitamin A and vitamin C in the skin and free radical generation. Ultraviolet light is also known to be a factor in formation of cataracts. Researchers have questioned whether limiting blue light exposure could reduce the risk of age-related macular degeneration.[33]

Modern phototherapy lamps used in the treatment of seasonal affective disorder and sleep disorders either filter out or do not emit ultraviolet light and are considered safe and effective for the intended purpose, as long as photosensitizing drugs are not being taken at the same time and in the absence of any existing eye conditions. Light therapy is a mood altering treatment, and just as with drug treatments, there is a possibility of triggering a manic state from a depressive state, causing anxiety and other side effects. While these side effects are usually controllable, it is recommended that patients undertake light therapy under the supervision of an experienced clinician, rather than attempting to self-medicate.[34]

It is reported that bright light therapy may activate the production of reproductive hormones, such as testosterone, luteinizing hormone, follicle-stimulating hormone, and estradiol.[35][36]

There are few absolute contraindications to light therapy, although there are some circumstances in which caution is required. These include when a patient has a condition that might render his or her eyes more vulnerable to phototoxicity, has a tendency toward mania, has a photosensitive skin condition, or is taking a photosensitizing herb (such as St. John's wort) or medication.[37] Patients with porphyria should avoid most forms of light therapy. Patients on certain drugs like methotrexate or chloroquine should use caution with light therapy as there is a chance that these drugs could cause porphyria.

Side effects of light therapy for sleep phase disorders include jumpiness or jitteriness, headache, and nausea. Some nondepressive physical complaints (such as poor vision and skin rash or irritation) may improve with light therapy.[38]