Maryland Route 139, known locally for most of its existence as North Charles Street, runs through Baltimore City and through the Towson area of Baltimore County. On the north end it terminates at a traffic circle with Bellona Avenue near Interstate 695 and at the south end it terminates in Federal Hill in Baltimore. Charles Street is one of the major routes through the city of Baltimore, and is a major public transportation corridor.

Though not exactly at the west–east midpoint of the city, Charles Street is considered to be the division between the west and east sides of Baltimore. On any given street that crosses Charles Street, address numbers start from the unit block on either end, and the streets are identified either as "West" or "East", depending on whether they are to the west or east of Charles.[3]

Maryland Route 139 begins at US 1/US 40 Truck in Baltimore (better known as North Avenue). MD 139, as mentioned before, follows North Charles Street northbound; the southbound lanes of MD 139 are carried by Saint Paul Street. 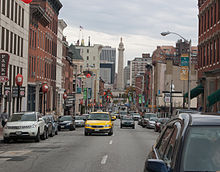 Outside of the MD 139 designation, Charles Street begins one block north of the elevated Interstate 95 at a dead end south of Wells Street, travelling north as a one-way street. After passing through downtown, Charles Street passes through Baltimore's historic district and follows a street which sometimes narrows to three lanes. It divided into two carriageways and becomes part of Washington Plaza for a few blocks, where the Washington Monument is located, eventually crossing a four-lane bridge over the Jones Falls and travelling north to North Avenue, where the historic area ends and the MD 139 designation begins.

Beginning the Maryland Route 139 designation, Charles Street follows a street with four-lane capacity and lined with trees, mostly fronted with rowhomes and several tall buildings. It spreads to six-lane capacity briefly at 26th Street as it continues north. Beyond 29th Street, it condenses to three lanes, gaining a one-lane southbound side street to the west, and passes between the Baltimore Museum of Art and Johns Hopkins University (JHU) campus. This configuration ends once the street crosses University Parkway, where the one-way restriction ends.

St. Paul Street is located one block to the east of Charles Street, and follows the same basic design southbound. It also begins at North Avenue; south of North Avenue, the street follows a portion of Maryland Route 2. As MD 139, St. Paul Street carries four lanes of roadway north from North Avenue, with a more residential appearance all the way north to 31st Street. Here, it enters the college neighborhood of JHU, fronted with stores, and the street itself widens to accommodate a segregated southbound parking lane. North of 33rd Street, it passes by the campus of Union Memorial Hospital to the east. Once the route moves north to University Parkway, it turns west to intersect Charles Street.

MD 139, now solely carried on Charles Street on a four-lane street, travels north through a wooded and much more residential neighborhood, on a path toward Stratford Road. Here, parallel parking on the street ends and all of its lanes are used for through traffic, and Charles Street splits into two one-lane, one-way streets which connect to the now-dualized St Paul Street. Here, MD 139 and Charles Street take over this roadway and travel further north, re-condensing to four-lanes undivided at the divided road's end and travelling due north. After two blocks, it crosses Cold Spring Lane and bisects the campus of Loyola College. It then continues further north through this sylvan area, across Northern Parkway, and passes by a large golf course to the west as the route crosses the city line into Baltimore County.

In the county, the route continues for a short stretch and crosses Bellona Avenue, where the route widens to a divided boulevard and starts to wind and curve through a wooded area, rising in elevation. The route then curves to the north, passing under the highly elevated Joppa Road and soon after encounters the Baltimore Beltway. The overpass that Charles Street uses to cross the Beltway was replaced in 2009 to a more decorative one as part of a project to widen the Beltway. The interchange with the Beltway is a half-diamond, half-dumbbell interchange, with its western entrance ramp also bringing in traffic from the nearby Interstate 83 interchange. Here, MD 139 and Charles Street officially end; however, the route's roundabout connects to another incarnation of Bellona Avenue, which connects to MD 131.

When Charles Street was first laid out in the Town of Baltimore in 1730, it was originally known as Forest (or Forrest) Street.[4][5] The southern end was at the present day Lombard Street at what was called Uhler's Spring Branch.[6] The road was being referred to as Charles Street by at least 1761.[7]

In 1858, the Jones Falls flooded and overflowed. The bridge along Charles Street was swept away.[8][9]

Charles Street is home to many famous landmarks in the Baltimore area. These include: 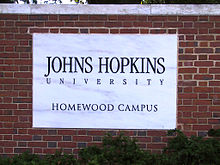 Johns Hopkins University as seen from the 3300 block of N Charles St.

In Baltimore City, there is plenty of public transportation along Charles Street provided by the Maryland Transit Administration. Route 11 currently operates along all points on Charles Street between downtown Baltimore and Northern Parkway. After operating along the parallel Bellona Avenue through the Rodgers Forge community, buses return to Charles Street (then in Baltimore County), then pass through Greater Baltimore Medical Center before operating via Towsontown Boulevard to Towson Town Center. Charles Street is also served by Route 3 as far north as 33rd Street. Southbound buses on this line operate along St. Paul Street. Routes 61 and Route 64 also operate in part on Charles Street.

There are also two rapid transit stations located on Charles Street. Penn Station is located between Charles and St. Paul Street, which connects to Amtrak, MARC Train, and Light Rail service. Along the Metro Subway, the street is served by the Charles Center station, located on Baltimore Street.