Charles Village is a neighborhood located in the north-central area of Baltimore, Maryland, USA. It is a middle-class area with many single-family homes that is in proximity to many of Baltimore's urban amenities. The neighborhood began in 1869 when 50 acres (200,000 m2) of land were purchased for development. The land was divided and turned over to various builders who constructed home exteriors, leaving the interiors to be custom built according to buyer specifications. The area was first developed as a streetcar suburb in the early 20th century, and is thought to be the first community to employ tract housing tactics.[2] At the time, the area was known as Peabody Heights; the moniker Charles Village, derived from Charles Street, the area's major north-south corridor, was coined in the 1970s as the beginning of a process of conceptually grouping a large and somewhat heterogeneous area. The neighborhood history has been researched and published by Gregory J. Alexander and Paul K. Williams in their book Charles Village: A Brief History (The History Press, 2009).

Charles Village in a strict sense consists of the area immediately to the east and south of the Johns Hopkins University Homewood campus. However, smaller neighborhoods to the east and south of this area — including Abell, Harwood, and Old Goucher — are considered by residents and other Baltimoreans to be part of Greater Charles Village. The Charles Village Community Benefits District (CVCBD) covers a hundred-block area generally bounded by 33rd Street to the north, Greenmount Avenue to the east, 25th Street (east of Guilford) and 20th Street (west of Guilford) to the south, and Johns Hopkins and Howard Street to the west. This area contains over 14,000 people and 700 businesses. The Charles Village Community Benefits District Management Authority (CVCBDMA) is a public entity that provides services within the CVCBD.

One of the Charles Village's defining features is its proximity to Johns Hopkins Homewood Campus. Many of the university's staff and students live in the neighborhood, particularly in the areas immediately adjacent to the campus. Perhaps as a result, Charles Village has for the past several decades attracted a large population of artists and bohemians. The area also has a reputation for being one of the more racially diverse neighborhoods in a city that was largely segregated for decades. The neighborhood in general becomes more affluent as you travel from south to north and from east to west. 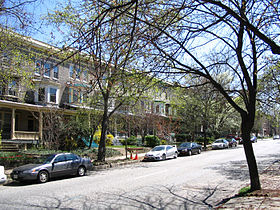 Though there are a number of apartment buildings, much of Charles Village's housing stock consists of two- and three-story rowhouses built in the early 20th century. Many of the houses have been well maintained and, along with the rest of the city, the neighborhood has seen a boom in real estate prices in the first half of the 2000s. Some of the larger rowhouses have been converted into multi-unit apartment houses in more recent decades.

In 1998, Charles Village residents were challenged to take up a paint brush and choose vividly uncommon colors for the facades and front porches of their Victorian rowhouses. Within five years, residents had enlivened more than 100 homes, including several which the owners have repainted more than once. More was at stake, though, than just neighborly relations; the contest offered $3,000 for the best front porch, $2,000 for the best flush front facade and even $500 for the best front door. And as the painters increased, so did the number of competitions, to up to three times a year with new prizes. City blocks, best railings, and entire homes were up for judging. The contests ended in 2003, but Charles Village homeowners say they are looking for the funding to restart the contest. The contests' lasting result is that the neighborhood is now part of iconic Baltimore, with pictures of the "Painted Ladies", as the homes are known, appearing on travel guides and magazine covers.

The neighborhood includes several small commercial districts and is within walking distance to the well-attended Waverly farmer's market. However, unlike many of the trendier neighborhoods in the city, there are few large-scale retail areas. That is in the process of changing, however, as two blocks of St. Paul Street in the northern part of the neighborhood have been completely redeveloped. On October 21, 2006, the first phase of a new development project was completed: a Barnes & Noble bookstore opened as an anchor to the retail space of a new dorm building, called Charles Commons, for Hopkins students. The project, completed in 2007, converted a stretch of rowhouses and small apartment buildings to the 600+ capacity dorm as well as multi-story condominiums, all of which contain ground-floor retail. The Barnes & Noble now serves both as the Johns Hopkins student bookstore and as a standard retail outlet for residents of North Baltimore City.

The Charles Village Community Benefits District Management Authority (CVCBDMA) is a special taxing district, one of four in Baltimore, the others being the Midtown Benefits District in Mount Vernon, the Downtown Partnership and the Waterfront Partnership. The CVCBD's geographical boundaries include four neighborhoods in the northern part of the city: Charles Village, Harwood, Abell and Old Goucher. Property owners within the CVCBDMA pay 12 cents per $100 of assessed value over and above city taxes to support the supplemental sanitation and safety services provided by the District.

The CVCBD was formed in 1994 through the efforts of the Charles Village Civic Association (CVCA), led by its then-president Ed Hargadon; the South Charles Village Business Association, led at the time by the managing partner of Whitman, Requardt & Associates, Tom Shafer; and the Greater Homewood Community Corporation (GHCC), whose executive director was former CVCA president Sandra Sparks. Shafer had been spurred into action by the 1992 murder of an employee in the company parking lot. He had pursued Benefits District legislation in the 1993 General Assembly without success, enjoying community support from GHCC but not from the CVCA. CVCA's decision to come on board in 1994 made it possible to pass the enabling legislation in the 1994 Maryland General Assembly, the City Council ordinance later that summer, and then a neighborhood referendum in October of that year. In the referendum, which was conducted using mail-in ballots by the Baltimore City Board of Elections, all registered voters and property owners were eligible to vote, and about 1,500 did so, and about two-thirds voted for the creation of the Benefits District.

Prior to 2006, the CVCBDMA provided a wide range of services to the community allowable under the enabling legislation. In addition to supplemental sanitation and safety services (including a security patrol), these included housing code enforcement, low-interest loans for residential and commercial revitalization, Painted Ladies contests, facade improvement matching grants, neighborhood festivals, and security cameras. Other than supplemental safety and sanitation, most services and activities were financed by grants awarded to the CVCBD but passed through an associated 501(c)3 nonprofit, the Charles Village Community Foundation.

Beginning in 2006, the CVCBDMA began to divest its housing and economic revitalization programs, transferring them to the Greater Homewood Community Corporation. In 2009, it also eliminated the "safety patrol" program because it was too costly and ineffective, replacing it with a community based safety program involving safety workshops for residents, victim's advocacy, and a neighborhood walkers on patrol program.

This restructuring led to a reduction in the CVCBDMA reliance on grants. The CVCBDMA now relies primarily on the surcharge tax and a regular grant from the Johns Hopkins University) and has focused its mission and financial resources on providing supplemental sanitation and community-based safety services, carried out by its uniformed, in-house staff. It also supports and organizes community activities that promote the District. 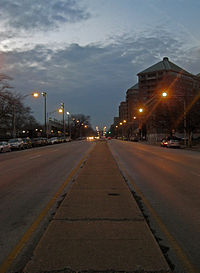 MTA Maryland's Route 11 and Route 3 buses are the two major mass transportation options in Charles Village, while Route 8 runs down Greenmount Avenue, just to the East of the neighborhood. Route 61 and Route 64 buses, which are weekday-only buses intended primarily for commuters, also travel through the area. Charles Village is not served by either of Baltimore's rapid transit systems.

Charles and Saint Paul Streets, two one-way streets that together comprise one of central Baltimore's main north-south corridors, pass through the middle of Charles Village; two other major corridors, Howard Street and Greenmount Avenue, bound the neighborhood on the west and east, respectively. The area is also only a short drive from the Jones Falls Expressway (I-83).