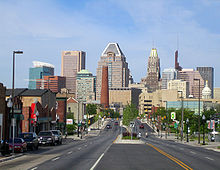 Downtown Baltimore is the section of Baltimore traditionally bounded by Martin Luther King, Jr. Boulevard to the west, Mt. Royal Avenue to the north, President Street to the east and the Inner Harbor area to the south. It consists of four neighborhoods: Westside, City Centre, Inner Harbor, and Camden Yards. It is the focal point of business in the Baltimore metropolitan area with over 100,000 employees.[citation needed] It has also increasingly become a heavily populated neighborhood with over 37,000 residents and new condominiums and apartment homes being built steadily.[citation needed]

The Inner Harbor is the chief commercial and tourist destination in Baltimore, visited by over 13 million people a year[citation needed]. It was also voted[by whom?] as one of the ten most attractive vacation destinations in the world. Here are a large confluence of restaurants, clubs, retail and pavilions. In and around the harbor are proposals for what is planned to be Baltimore's tallest skyscraper, at 10 Inner Harbor, as well as several other buildings.

Mt. Vernon, also known as the cultural district, is a high-density area known for its attractive nightlife, buoyed by its large amount of bars, clubs and lounges and its historic multi-story townhomes (most of which have been transformed into apartments) and traditional apartment buildings. In Mt. Vernon are the Joseph Meyerhoff Symphony Hall, home of the Baltimore Symphony Orchestra, and the Lyric Opera House. The world-renowned Peabody Institute is also located in Mt. Vernon. To the very north is Penn Station, which offers Amtrak service to most US cities and MARC service to Washington, D.C.

The last section of downtown Baltimore is Camden Yards. This includes the Camden Yards ballpark, home to the Baltimore Orioles, and the M&T Bank Stadium, home of the Baltimore Ravens. Many residential and commercial proposals have also been made for this area.

Downtown Baltimore has been the center of city life since Baltimore was chartered in 1796.

The Pratt Street Power Plant was built in 1900. In 1904, downtown Baltimore was almost destroyed by a huge fire with damages estimated at $150 million. In 1973, Vice President Spiro Agnew resigned from the vice-presidency in the Garmatz Federal Office Building at Charles Centre.

Downtown Baltimore offers many options for transportation, including subway/light train, bus service, MARC Train service through Penn Station and Camden Station as well as access to I-83, I-695, I-95, 295, and 395.