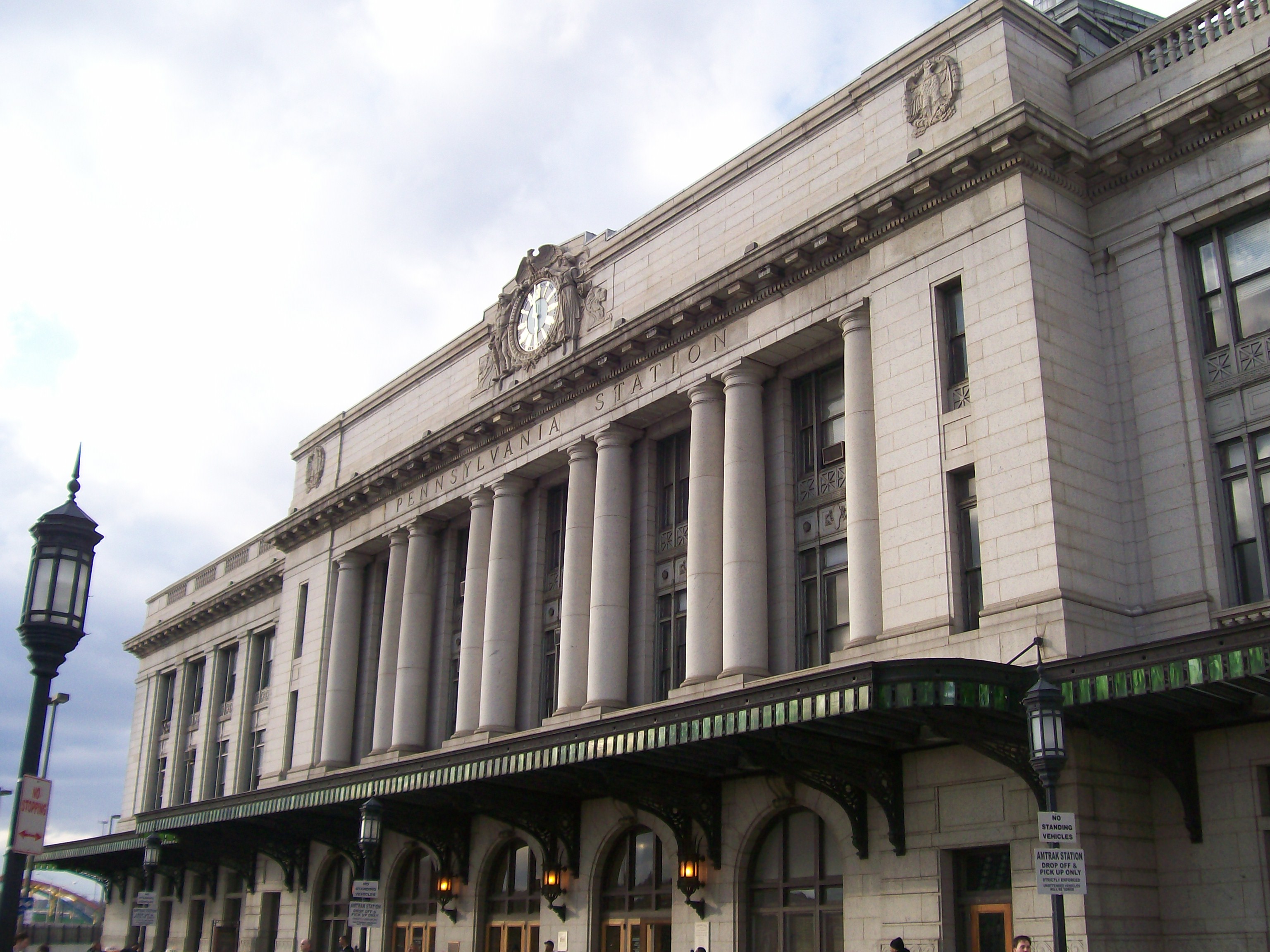 Pennsylvania Station (generally referred to as "Penn Station") is the main train station in . Designed by New York architect (1872–1938), it was constructed in 1911 in the Beaux-Arts style of for the . It is located at 1515 N. Charles Street, on a raised "island" of sorts between two open trenches, one for the and the other the tracks of the . The Mount Vernon neighborhood lies to the south, and is to the north. Penn Station is about a mile and a half north of downtown and the . The station was originally known as Union Station (because it was served by both and ), but was renamed to match other s in 1928.

Both the northern and southern (NEC) approaches into the station are tunneled. The two-track (B&P Tunnel), which opened in 1873, constitutes the southern approach. At 7,660 feet (about 1.5 miles) in length, it is one of the worst bottlenecks on the NEC since the maximum speeds for trains through the tunnel is only 30mph. The northern approach for Penn Station is carried through the Union Tunnel, which has a single-track bore and a double-track bore. The Union Tunnel was opened in 1873 and has been upgraded since, and is not as bad a chokepoint as the B&P tunnel, since it has two bores and lacks the sharp curves and steep grades that its opposite to the south has.

Penn Station is served by , MARC, and the 's light rail system. It is the eighth busiest rail station in the by number of passengers served.

Current and prior services

As of January, 2007, Penn Station is served by both MARC and Amtrak trains. MARC offers service between Washington, DC and Perryville, MD. Amtrak Regional trains from Penn Station serve destinations along the and in between Boston, and Newport News, VA, including New York, Philadelphia, Wilmington, DE, Washington, and Richmond. Other long distance trains from the station serve:

Previous Amtrak trains in the 1970s and 1980s also offered service to Harrisburg and , St. Louis, and . However, these services have since been discontinued over the past 30 years.

Prior to Amtrak's creation on , , Penn Station served as the main Baltimore station for its original owner, the , though passenger trains of the also used Penn Station as well. Until the late-1960s, the Pennsylvania Railroad also operated long-distance trains over its historic line from Penn Station to Harrisburg and beyond, such as "The General" to Chicago, the "Spirit of St. Louis" to its Missouri namesake, and the "Buffalo Day Express" and overnight "Northern Express" between Washington, DC, and . As late as 1956, this route also hosted the "Liberty Limited" to Chicago and the "Dominion Limited" to . The now operates over much of the Northern Central Railway's right of way in Baltimore and Baltimore County; however, the spur connecting Penn Station to this right of way is not the route originally taken by Northern Central trains.

The station's use as a Western Maryland station stop allowed passengers from Penn Station to ride directly to various Maryland towns such as Westminster, Hagerstown, and Cumberland. Passenger service on the Western Maryland ended in 1958.

In 2004, the City of Baltimore, through its public arts program, commissioned noted sculptor to create a as the centerpiece of a re-designed plaza in front of Penn Station. His work, a convert|51|ft|m|1|sp=us|adj=on-tall aluminum statue entitled "Male/Female", has generated considerable controversy ever since. Its defenders cite the contemporary imagery and artistic expression as complementing an urban landscape, while opponents criticize what they decry as a clash with Penn Station's Beaux-Arts architecture, detracting from its classic lines.

Three years later, "Baltimore Sun" columnist ridiculed the artwork, writing on , , "Patrons of art here paid $750,000 for a 51-foot sculpture...that looks like "Gort" from "The Day the Earth Stood Still". I look at it and want to say: '!' It's the first thing visitors see when they walk out of the train station." [cite journal | author= | title=Bawlmer bizarre&ndash;what a relief | journal= | date=, | pages=p. 3B ] Another "Sun" reporter, commenting in July 2008 on what she described as the "stormy relationship" between Baltimore and public art, said "People's hate for Penn Station's behemoth "Male/Female" sculpture has burned for years." [cite journal | author=Jill Rosen | title=Fake forest hides in plain sight | journal= | date=, | pages=p. 1C ]

In March 2006, Amtrak was reported to be in negotiations with a unnamed developer to build a 72-room hotel on three unused floors of Penn Station, possibly also including additional retail space on the station's main floor. If Amtrak were to build a hotel at Penn Station, it would be a first for any Amtrak station in the United States.

During what became known as the , on , , , then a U.S. Senator from California and the Republican Party's nominee for Vice President, cited Penn Station as the place where a package was waiting for him, containing a dog his daughter Tricia would name "Checkers." Nixon erred in naming the station, using its former name, calling it "Union Station in Baltimore."