Contents of the Voyager Golden Record

Contents of the Voyager Golden Record 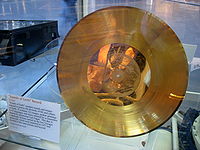 The contents of the Voyager Golden Record is a collection of 116 images and a variety of natural sounds, such as those made by surf, wind, and thunder, and animal sounds, including the songs of birds and whales. To this they added musical selections from different cultures and eras, spoken greetings in fifty-five languages, and printed messages from President Jimmy Carter and U.N. Secretary-General Kurt Waldheim. The items were selected for NASA by a committee chaired by Carl Sagan of Cornell University.

After NASA had received criticism over the nudity on the Pioneer plaque (line drawings of a naked man and woman), the agency chose not to allow Sagan and his colleagues to include a photograph of a nude man and woman on the record. Instead, only a silhouette of the couple was included.[1]

Here is an excerpt of President Carter's official statement placed on the Voyager spacecraft for its trip outside our solar system, June 16, 1977:

We cast this message into the cosmos ... Of the 200 billion stars in the Milky Way galaxy, some — perhaps many — may have inhabited planets and space faring civilizations. If one such civilization intercepts Voyager and can understand these recorded contents, here is our message: We are trying to survive our time so we may live into yours. We hope some day, having solved the problems we face, to join a community of Galactic Civilizations. This record represents our hope and our determination and our goodwill in a vast and awesome universe.

This is a list of the recorded greetings as they appear on the track[4]:

The next audio section is devoted to the "sounds of Earth" that include[5]:

Included within the Sounds of Earth audio portion of the Golden Record is a track containing the inspirational message per aspera ad astra in Morse Code. Translated from Latin, it means, through hardships to the stars.

Following the section on the sounds of Earth, there is an eclectic 90-minute selection of music from many cultures, including Eastern and Western classics. The selections include:

Sagan had originally asked for permission to include "Here Comes the Sun" from the Beatles' album Abbey Road. While the Beatles favoured it, EMI opposed it and the song was not included.[6]

The Golden Records also carried an hour long recording of the brainwaves of Ann Druyan, who would later marry Carl Sagan. In the Epilogue of the book Billions and Billions, she describes the experience:

Earlier I had asked Carl if those putative extraterrestrials of a billion years from now could conceivably interpret the brain waves of a meditator. Who knows? A billion years is a long, long time, was his reply. On the chance that it might be possible why don't we give it a try? Two days after our life-changing phone call, I entered a laboratory at Bellevue Hospital in New York City and was hooked up to a computer that turned all the data from my brain and heart into sound. I had a one-hour mental itinerary of the information I wished to convey. I began by thinking about the history of Earth and the life it sustains. To the best of my abilities I tried to think something of the history of ideas and human social organization. I thought about the predicament that our civilization finds itself in and about the violence and poverty that make this planet a hell for so many of its inhabitants. Toward the end I permitted myself a personal statement of what it was like to fall in love.[7]

On February 12, 2010, an interview with Ann Druyan was aired on National Public Radio (NPR) during which the above was explained in more detail.[8]

Along with the audio the record contains a collection of 116 pictures (one of which is for calibration) detailing but not limited to human life on earth and the planet itself. Many pictures are annotated with one or many indications of scales of time, size or mass. Some images also contain indications of chemical composition. All measures used on the pictures are first defined in the first few images using physical references.

Following is a list of all the images contained in the Voyager Golden Record together with, when copyright permits, the actual image, a description of the nature of the image and what annotations were included in them.[9]