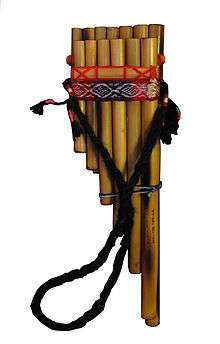 The pan flute or pan pipe (also known as panflute or panpipes) is an ancient musical instrument based on the principle of the closed tube, consisting usually of five or more pipes of gradually increasing length (and, at times, girth). The pan flute has long been popular as a folk instrument, and is considered the first mouth organ, ancestor of both the pipe organ and the harmonica. The pan flute is named for its association with the rustic Greek god Pan. The pipes of the pan flute are typically made from bamboo or giant cane; other materials used include wood, plastic, and metal.

Another term for the pan flute is syrinx, from Greek mythology, the story of Pan. The plural of syrinx is syringes, from which the modern word syringe is derived. (Pan pipes is both singular and plural.) Other names for the instrument are mouth organ, Pandean pipe, and the Latin fistula panis.

The tubes comprising it are stopped at one end, at which the standing wave is reflected giving a note an octave lower than that produced by an open pipe of equal length. In the traditional South American style, pipes are fine-tuned to correct pitch by placing small pebbles or dry corn kernels into the bottom of the pipes. Contemporary makers of curved Romanian-style panpipes use wax (commonly beeswax) to tune new instruments. Special tools are used to place or remove the wax. Corks and rubber stoppers are also used, and are easier to quickly tune pipes. 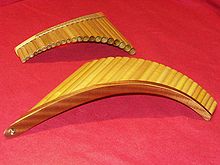 The pan flute is an air-reed instrument (see Wind Instrument). Sound is produced by the vibration of an air-stream blowing across an open hole at the end of a resonating tube. The length of the tube determines the fundamental frequency. An overblown harmonic register is near a 12th above the fundamental in cylindrical tubes, but can approach an octave jump (8th) if a decreasing taper is used.

The formula for calculating the length of a pan flute tube is TL = (S/F) / 4 (the "theoretical length" [TL] equals the speed of sound [S], divided by the desired frequency in hertz [F], that quantity divided by 4). Because of a property of compression within the tube, the length must be a little shorter to correct flat pitch. The extra length is helpful for a maker, who can use a cork or plug at the bottom to adjust the pitch. Some instruments use wax or pellets to tune the fundamental pitch of each tube. A tube that has a diameter 1/10 of its length yields a typical tone colour (see Timbre). An inner diameter range between 1/7 and 1/14 of the length (TL) is acceptable. A narrow tube will sound "reedy", while a wide one will sound "fluvctey". If you are a "perfectionist", multiply the bore diameter by 0.82 and subtract this value from the tube length. This compensates for internal compression slowing frequency and the lips partially covering the voicing. Only tiny adjustments will be needed then to adjust fundamental pitch for air density and temperature. [1][2][3]

The pan flute is played by blowing horizontally across the open end against the sharp inner edge of the pipes. Each pipe is tuned to a keynote, called the fundamental frequency. By overblowing, that is, increasing the pressure of breath and tension of lips, odd harmonics (notes whose frequencies are odd-number multiples of the fundamental), near a 12th in cylindrical tubes, may also be produced. The Romanian panflute has the pipes arranged in a curved array, enabling the player to easily reach all the notes by simply swiveling their head. These instruments can also play all the sharps and flats, with a special technique of both tilting the pipes and jaw movement, thus reducing the size of the pipe's opening and producing a change in pitch. An advanced player can play any scale and in any key. There are two styles of vibrato possible, hand vibrato and breath vibrato. In hand vibrato, the player applies a gentle motion to one end of the panflute (usually the high end) in much the same way as the violin vibrato is achieved by rocking the hand from the wrist. Breath vibrato is the same technique used by players of the flute and other woodwinds by use of the player's diaphragm. 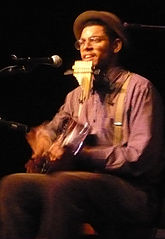 American musician Dom Flemons of the Carolina Chocolate Drops plays the quills, a traditional African American pan flute, suspending it in front of his mouth with a harmonica rack

The curved-style pan flute was popularized by the Romanian musician Gheorghe Zamfir, who toured extensively and recorded many albums of pan flute music in the 1970s, and by several other artists who began recording at the same time. Today there are thousands of devoted players across Europe, Asia and the Americas. Both the curved and traditional South American variations are also very popular in Peruvian traditional groups and other Andean music.

In Laos and Thailand, there is a cylindrical version called the wot, used in folk music from the Isaan region of the country. The player alters notes by rotating the instrument with the hands, rather than by head movements. 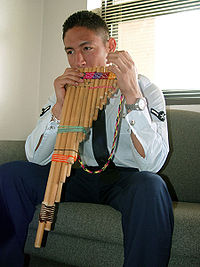