Some groups are large (e.g. Catholics, Lutherans, Anglicans or Baptists), while others are just a few small churches, and in most cases the relative size is not evident in this list. Also, modern movements such as Fundamentalist Christianity, Pietism, Evangelicalism, Pentecostalism and the Holiness movement sometimes cross denominational lines, or in some cases create new denominations out of two or more continuing groups, (as is the case for many United and uniting churches, for example). Such subtleties and complexities are not clearly depicted here. Additionally, some groups viewed by non-adherents as denominational actively resist being called a "denomination" and do not have any formal denominational structure, authority, or record-keeping beyond the local congregation; several groups within Restoration Movement fall into this category.

Note: This is not a complete list, but aims to provide a comprehensible overview of the diversity among denominations of Christianity. As there are reported to be approximately 38,000 Christian denominations,[2] many of which cannot be verified to be significant, only those denominations with Wikipedia articles will be listed in order to ensure that all entries on this list are notable and verifiable.

Note: Between denominations, theologians, and comparative religionists there are considerable disagreements about which groups can be properly called Christian, disagreements arising primarily from doctrinal differences between groups. For the purpose of simplicity, this list is intended to reflect the self-understanding of each denomination. Explanations of different opinions concerning their status as Christian denominations can be found at their respective articles.

Note: There is no official recognition in most parts of the world for religious bodies, and there is no official clearinghouse which could determine the status or respectability of religious bodies. Often there is considerable disagreement between various churches about whether other churches should be labeled with pejorative terms such as "cult", or about whether this or that group enjoys some measure of respectability. Such considerations often vary from place to place, where one religious group may enjoy majority status in one region, but be widely regarded as a "dangerous cult" in another part of the world. Inclusion on this list does not indicate any judgment about the size, importance, or character of a group or its members.

These are the churches which claim continuity (based upon Apostolic Succession) with the early Church.

Catholic Church is composed of two rites; one is the western or latin rite, another is the eastern rite (i.e., Eastern Catholic Churches).

The Latin Rite or Church[3] is the largest and most widely known of the 22 Rites that together make up the Catholic Church.

All of the following are particular churches of the Catholic Church. They are all in communion with the Bishop of Rome and acknowledge his claim of universal jurisdiction and authority. They have some minor distinct theological emphases and expressions (for instance, in the case of those that are of Greek/Byzantine tradition, concerning some non-doctrinal aspects of the Latin view of purgatory).[4] The Eastern Catholic churches and the Latin church (which together compose the worldwide Catholic Church) share the same doctrine and sacraments, and thus the same faith.

List provided in order of precedence. Indentation indicates autonomy rather than autocephaly.

The Eastern Orthodox Church considers itself to be the One Holy Catholic and Apostolic Church that Christ founded.

Some Orthodox Churches with not universally recognized autocephaly by the Ecumenical Patriarchate of Constantinople:

Oriental Orthodoxy comprises those Christians who did not accept the Council of Chalcedon (AD 451). Other denominations often erroneously label these churches "Monophysite", however, as the Oriental Orthodox do not adhere to the teachings of Eutyches, they themselves reject this label, preferring the term Miaphysite.

The Oriental Orthodox Church considers itself to be the One Holy Catholic and Apostolic Church that Christ founded.

Church of the East

The Church of the East is said to have been formed by St Thomas. The Church did not attend the Council of Ephesus (AD 431). It is incorrectly referred to as the Nestorian Church; Assyrian Christians do not consider themselves Nestorians, and recent Christological agreements with the Catholic and some of the Orthodox churches have resolved this debate permanently, clearing the way for ecumenical relations.

The Church of the East considers itself to be the One Holy Catholic and Apostolic Church that Christ founded.

These are the churches "which repudiated the papal authority, and separated or were severed from the Roman communion in the Reformation of the 16th cent., and of any of the bodies of Christians descended from them."[6] 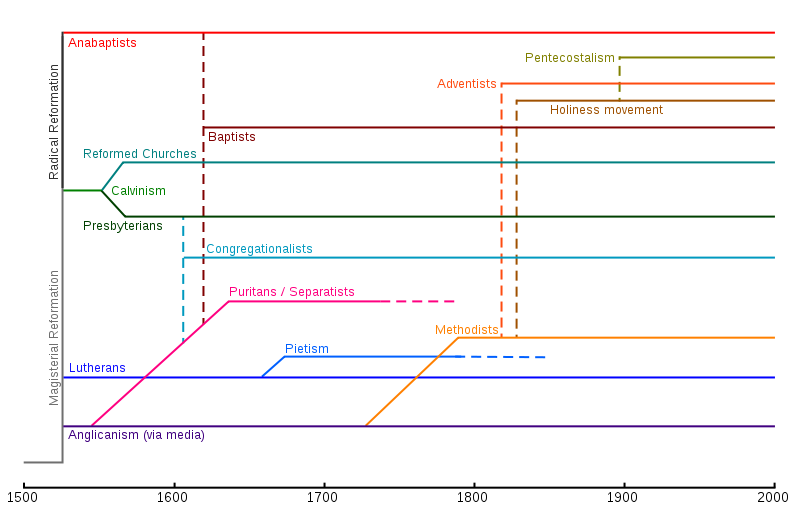 Anglicanism has referred to itself as the via media between Roman Catholicism and Protestantism. It considers itself to be both Catholic and Reformed. Although the use of the term "Protestant" to refer to Anglicans was once common, it is controversial today, with some rejecting the label and others accepting it.

The Anglican Communion considers itself to be part of the One Holy catholic and Apostolic Church that Christ founded, without the implication that various other churches are not also branches of it.