Christian churches and churches of Christ

Christian churches and churches of Christ

Churches in this tradition have no formal denominational ties, and thus there are no official statistical data, but the 2006 Directory of the Ministry[1] documents some 5,500 congregations. Many estimate the number to be over 6,000.

The churches are independent congregations and typically go by the name "Christian Church", but often use the name "church of Christ" as well. Though isolated exceptions may occur, it is generally agreed within the movement that no personal or family names should be attached to a congregation which Christ purchased and established with his own blood, though geographical labels are acceptable. Thus, it is common for a congregation to be known as "[City Name] Christian Church," [2] but in some areas they may be known as "[The/First] Christian Church [of/at] [City, Community, or Other Location Name]." In recent history, individual congregations have made the decision to change their formal name to break with traditional nomenclature and to adopt more generic names like "Christ's Church [of/at] [City Name]", "[City Name] Community Christian Church", or "[City Name] Community Fellowship". The tendency in Restoration churches to choose names such as "Christian Church" and "Church of Christ" can cause difficulties in identifying the affiliation (if any) of an individual church based solely on its name. Furthermore, it is not uncommon for churches outside of the Restoration Movement to use similar names (see Church of Christ (disambiguation)).

Separation from the Disciples of Christ

The separation of the independent Christian churches and churches of Christ from the Christian Church (Disciples of Christ) (DoC) occurred over an extended period of time.[3]:185 The roots of the separation date back to a polarization that occurred during the early twentieth century as the result of three significant controversies.[3]:185 These controversies surrounded theological modernism, the impact of the ecumenical movement, and open membership (recognizing as full members individuals who had not been baptized by immersion).[3]:185 Theological modernism and ecumenism led to the development of a denominational structure within the Christian Church (Disciples of Christ).[citation needed] The split occurred as local congregations refused to take part in rapidly developing extra-congregational organizations that eventually evolved into a General Assembly.[citation needed] They were also disturbed by what they saw as liberal influences within the Christian Church (Disciples of Christ) concerning Biblical criticism and social justice.[citation needed]

The official separation between the independent Christian churches and churches of Christ and the Christian Church (Disciples of Christ) is difficult to date.[4]:407 Suggestions range from 1926 to 1971 based on the events outlined below:

Because of this separation, many independent Christian churches and churches of Christ are not only non-denominational, they can be anti-denominational, avoiding even the appearance or language associated with denominationalism holding true to their Restoration roots and firm conviction that Christ has founded only one church which is his body.

Because the Christian churches and churches of Christ are independent congregations there is no set creed, but The Directory of the Ministry[1] contains the following general description:

"Members of Christian Churches and churches of Christ believe in the deity and Lordship of Jesus Christ, the inspiration of the Bible, and the autonomy of local congregations. Following the basic principles of the 'Restoration Movement', they accept and teach regenerative baptism by immersion into Christ for the forgiveness of sins; they assemble for worship on the first day of the week, making the observance of the Lord's Supper a focal point in such worship. They seek the unity of all believers on the basis of faith in and obedience to Christ as the divine Son of God and the acceptance of the Bible particularly the New Testament as their all-sufficient rule of faith and practice." 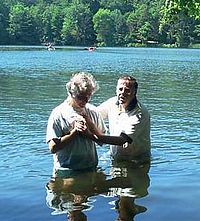 Of the principles cited above, one characteristic marks most Christian Churches and Churches of Christ as distinctly different from other modern evangelical Christian groups today. That is the teaching that a person is ultimately regenerated by the Holy Spirit, and receives the remission of sins, during his baptism. [5] Baptism is:

The teaching that "salvation coming by grace through faith at immersion into Christ" is the only New Testament example for Christians to follow today is viewed by many groups, particularly those of Calvinist persuasion, as too similar to a salvation by works rather than a salvation by faith alone.[citation needed] Christian Churches and Churches of Christ contend that true faith is not mere belief, but no less than a believing, trusting, and repentant obedience, that baptism is always mentioned in the passive verbal forms in the New Testament (i.e. "be baptized [at the hands of another]", as opposed to Old Testament-styled active commands), because it is a work of God, not man [Col 2:12].[citation needed] In that respect, (being a work of God) baptism may be considered similar to belief [John 6:28, 29].[citation needed] The assertion follows that it is Christ's redemptive work one trusts in as they, by faith, accept his free offer of grace.[citation needed] Finally, a life of trusting faithfulness until death is seen to demonstrate the authenticity of one's faith, and further makes his or her calling and election sure.[citation needed]

The Christian Churches/churches of Christ support a variety of Bible colleges and seminaries. Because there is no official "denominational" structure in the movement, the local colleges often serve as information centers and allow the local churches to maintain connections with each other.

A number of slogans have been used in the Restoration Movement to express some of the distinctive themes of the Movement.[11]:688 These include: