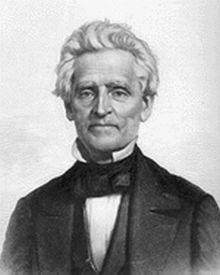 "Raccoon" John Smith (1784 - February 28, 1868) was an early leader in the Restoration Movement.[1]:690 He played a critical role uniting the movement led by Thomas and Alexander Campbell with the similar movement led by Barton W. Stone and in spreading the message of the movement over much of Kentucky.[1]:690

As a preacher, Smith began to wrestle with the Calvinist teachings of predestination and total depravity as taught in The Philadelphia Confession of Faith[1].[1]:690 His doubts regarding these doctrines meant that when he met Alexander Campbell in 1824 he was open to the Restoration Movement themes that salvation is open to all based on faith in Christ, repentance from sin and baptism by immersion.[1]:690

After meeting Alexander Campbell, Smith soon became a leader in the Restoration Movement, working primarily among the Baptists in Kentucky.[1]:690 Because preachers of the time were typically unpaid, he worked as a farmer for most of his life.[1]:690 He was willing, though, to go anywhere and preach to anyone who would listen and was successful in persuading many in Kentucky to join the movement.[1]:691

He also played a key role in bringing the Stone and Campbell movements together in late 1832 and early 1833.[1]:691 This was formalized at the High Street Meeting House in Lexington, Kentucky, with a handshake between Barton Stone and Smith.[2]:116-120 Smith had been chosen by those present to speak on behalf of the followers of the Campbells.[2]:116 A preliminary meeting of the two groups was held in late December 1831, culminating with the merger on January 1, 1832.[2]:116-120[3]:xxxvii Two representatives of those assembled were appointed to carry the news of the union to all the churches: John Rogers, for those associated with Stone and Smith for those associated with the Campbells. Despite some challenges, the merger succeeded.[4]:153-154 Many believed the union held great promise for the future success of the combined movement and greeted the news enthusiastically.[5]:9 Smith spent three years traveling through Kentucky with Rogers encouraging congregations associated with the Stone and Campbell movements to unite.[1]:691