Dutch and German immigrants from Krefeld, Germany, settled in Germantown, Pennsylvania, in 1683. Swiss Mennonites came to North America in the early part of the 18th century. Their first settlements were in Pennsylvania, then in Virginia and Ohio. These Swiss immigrants, combined with Dutch and German Mennonites and progressive Amish Mennonites who later united with them, until 2002 made up the largest body of Mennonites in North America (in the past often referred to as the "Old Mennonites"). They formed regional conferences in the 18th century, and a North American conference in 1898. The year 1725 is often considered the date of organization in the United States, when a ministers' conference met in Pennsylvania and adopted the Dordrecht Confession of Faith as their official statement of faith.

In 1983 the General Assembly of the Mennonite Church met jointly with the General Conference Mennonite Church in Bethlehem, Pennsylvania, in celebration of 300 years of Mennonite witness in the Americas. Beginning in 1989, a series of consultations, discussions, proposals, and sessions (and a vote in 1995 in favor of merger) led to the unification of these two major North American Mennonite bodies into one denomination organized on two fronts - the Mennonite Church USA and the Mennonite Church Canada. The merger was "finalized" at a joint session in St. Louis, Missouri in 1999, and the Canadian branch moved quickly ahead. The United States branch did not complete their organization until the meeting in Nashville, Tennessee in 2001, which became effective February 1, 2002.

The merger of 1999-2002 at least partially fulfilled the desire of the founders of the General Conference Mennonite Church to create an organization under which all Mennonites could unite. Yet not all Mennonites favored the merger. The Alliance of Mennonite Evangelical Congregations represents one expression of the disappointment with the merger and the events that led up to it.

Every other year, Mennonite Church USA holds a week-long, church-wide convention. The next convention will be Phoenix 2013, held July 1-6, 2013 in Phoenix, Arizona. Everyone within Mennonite Church USA is invited to attend the convention, and there are gatherings for adults, youth, junior youth and children (K-5, Preschool and Infants/Toddlers). During the convention, there are worship sessions, seminars, alumni gatherings, special dinners and many fun activities. Also, taking place during the convention is the Delegate Assembly. Delegates from local congregations, regional area conferences and constituency groups gather to develop vision and direction for the national denomination. Previous conventions have been held in Nashville, Tennessee, Charlotte, North Carolina, Columbus, Ohio and Pittsburgh, Pennsylvania. 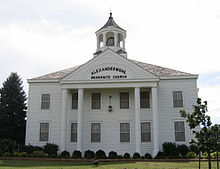 All congregations in the denomination belong to an area conference, and it is the area conference that is the component part of Mennonite Church USA. There are currently 21 area conferences with many of them overlapping geographically due to conference structures prior to the merger.

Mennonite Church USA provides denominational oversight through Mennonite Education Agency to five colleges and universities and two seminaries in the United States. These are:

God calls us to be followers of Jesus Christ and, by the power of the Holy Spirit, to grow as communities of grace, joy, and peace, so that God's healing and hope flow through us to the world.

Joining in God’s activity in the world, WE develop and nurture missional Mennonite congregations of many cultures. (Ephesians 3:1-13, Article 9, Confession of Faith in a Mennonite Perspective)

All parts of Mennonite Church USA, united in vision and purpose, are committed to the following priorities between 2006 and then 2020.[27]

Confession of Faith in a Mennonite Perspective

A Confession of Faith in a Mennonite Perspective.[28] provides a guide to the beliefs and practices of Mennonite Church USA. This confession was adopted in 1995 at a joint session of the Mennonite Church and General Conference Mennonite Church in Wichita, Kansas. It contains 24 articles ranging from the more general Christian theologies of God, Jesus Christ, and the Holy Spirit to the more distinct Foot Washing, Truth and the Avoidance of Oaths, Peace, Justice, and Nonresistance, and The Church's Relation to Government and Society.

As with many Christian denominations in the United States, Mennonite Church USA is no stranger to controversies regarding sexual orientation and gender identity. The Brethren Mennonite Council has been active since 1976 to encourage full inclusion for lesbian, gay, bisexual, and transgender persons in the church. While as early as 1987, the constituent parts of MCUSA had issued the Purdue Statement, establishing heterosexuality as the only legitimate form of sexual expression.[29] This position has resulted in many congregations and pastors being disciplined over the years for their inclusive membership practices. At the 2009 Convention in Columbus, Ohio, the Pink Menno Campaign witness brought the issue back into the open . With hundreds of youth convention participants and delegates wearing pink, MCUSA has been forced to reopen its discussions on human sexuality.[30]

The Mennonite Church USA takes a pro-life stance on abortion.

They also oppose euthanasia and the capital punishment.[32]