List of sects in the Latter Day Saint movement

List of sects in the Latter Day Saint movement 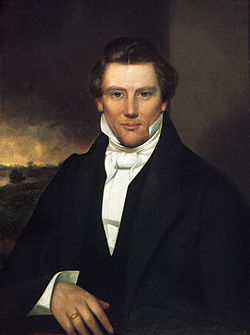 An 1842 portrait of Joseph Smith, Jr., founder of the Latter Day Saint movement

The term Mormonism is often used as a collective description of the movement and especially of The Church of Jesus Christ of Latter-day Saints; however, many other Latter Day Saint sects are opposed to the use of this term, as they consider it to be derogatory and connected to the polygamy once practiced by the Utah church.[2] These other groups tend to prefer the terms Restorationist or Latter Day Saint.

Though a few minuscule factions broke with Smith's organization during his lifetime, he retained the allegiance of the vast majority of Latter Day Saints until his murder in June 1844. Following Smith's death, his movement experienced a profound leadership crisis which led to a schism within his church. The largest group followed Brigham Young, settling in what would become the Utah Territory (The Church of Jesus Christ of Latter-day Saints). The second-largest faction coalesced around Joseph Smith III, eldest son of Joseph Smith, Jr. (the Reorganized Church of Jesus Christ of Latter Day Saints), currently headquartered in Independence, Missouri. Other would-be leaders included the senior surviving member of the First Presidency, Sidney Rigdon, the newly-baptized James Strang from Wisconsin, and Alpheus Cutler, one of the Council of Fifty. Each of these men still retains a following as of 2010—however tiny it may be in some cases—and all of their organizations have experienced further schisms.[3][4][5] Other claimants such as Granville Hedrick, William Bickerton and Charles Thompson, among others, later emerged to start still other factions, some of which have further subdivided.

An 1851 tinted lithograph depicting the death of Joseph Smith, Jr. in 1844

Given the large number of Latter Day Saint churches and their differing backgrounds, categorizing them can be difficult. A common approach in a number of histories and studies is to use Rocky Mountain Saints for those denominations headquartered in the American West and Prairie Saints for those sects that formed in and around Nauvoo, Illinois; Voree, Wisconsin; Independence, Missouri, and other locations in the Midwest and East. These terms do not necessarily relate the current geographical locations of all sects within those two groupings, but rather the original location of their respective parent organizations, which may be seen in the table below.

Another method uses provenance: for instance, all sects that ultimately trace their history back to The Church of Jesus Christ of Latter-day Saints in Utah are organized as one factional group, since the LDS church is directly connected historically to Joseph Smith, Jr.'s, organization, of which it claims to be the sole legitimate continuation. Divergent Paths of the Restoration—a reference work on this subject—follows this approach.[3]

In such studies, and in general Latter Day Saint parlance, the -ite-suffixed terms Josephite and Brighamite have been used for Missouri-based "Community of Christ" and Utah-based "LDS Church" respectively; and these terms have sometimes been used to distinguish groups of sects, as well. Those sects within each group share a common ancestry and basic beliefs that are different from groups sharing other provenances. The present article, in a similar fashion, distinguishes among groups of sects by use of commonly understood names such as Mormon Fundamentalist or else by short descriptions that often reference a founder of the first church within a factional group (for example, Joseph Smith III in reference to "Community of Christ" ("Reorganized Church of Jesus Christ of Latter Day Saints") as well as various churches and factions that trace their origin to it). 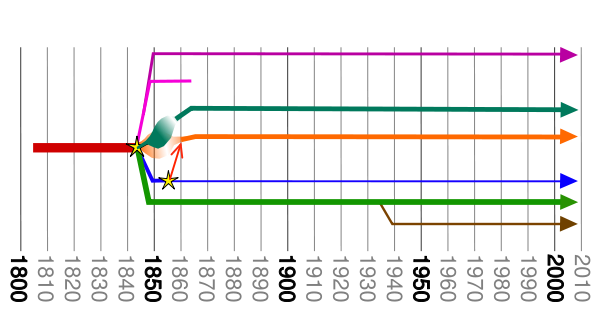