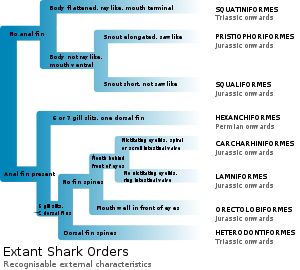 Sharks belong to the superorder Selachimorpha in the subclass Elasmobranchii in the class Chondrichthyes. The Elasmobranchii also include rays and skates; the Chondrichthyes also include Chimaeras. It is currently thought that the sharks form a polyphyletic group: in particular, some sharks are more closely related to rays than they are to some other sharks. The first sharks appeared in the oceans 350 to 400 million years ago. Most of the species we know today are as old as the Jurassic period.

Listed below are extant species of shark in taxonomic order. Sharks are spread across eight orders which are listed in roughly evolutionary order (from primitive to modern), and the families and genera within the orders are listed in alphabetical order.