Sharks (superorder Selachimorpha) are a type of fish with a full cartilaginous skeleton and a highly streamlined body. The earliest known sharks date from more than 420 million years ago, before the time of the dinosaurs.[1]

Since that time, sharks have diversified into more than 440 species, ranging in size from the small dwarf lanternshark, Etmopterus perryi, a deep sea species of only 17 centimetres (6.7 in) in length, to the whale shark, Rhincodon typus, the largest fish, which reaches approximately 12 metres (39 ft 4 in) and which feeds only on plankton, squid, and small fish by filter feeding. Sharks are found in all seas and are common down to depths of 2,000 metres (6,600 ft). They generally do not live in freshwater, with a few exceptions such as the bull shark and the river shark which can live both in seawater and freshwater.[2] They breathe through five to seven gill slits and have a covering of dermal denticles that protect their skin from damage and parasites. Denticles also improve their fluid dynamics by maintaining turbulent flow over the animals body, this means that the shark can move faster. They have several sets of replaceable teeth.[3]

Some well-known species such as the great white shark, tiger shark, and the hammerhead are apex predators, at the top of the underwater food chain. Their skills as predators fascinate and frighten humans, even as their survival is under serious threat from fishing and other human activities.

The following outline is provided as an overview of and topical guide to sharks: 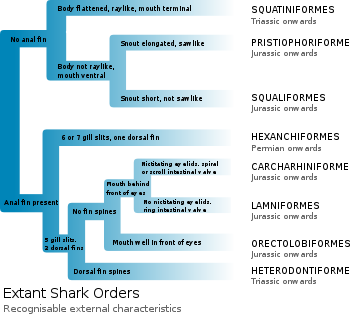 Subdivisions of the biological classification Selachimorpha include:

A whale shark in the Georgia Aquarium 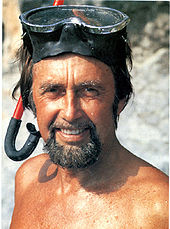