The basking shark (Cetorhinus maximus) is the second largest living fish, after the whale shark. It is a cosmopolitan migratory species, found in all the world's temperate oceans. It is a slow moving and generally harmless filter feeder and has anatomical adaptations to filter feeding, such as a greatly enlarged mouth and highly developed gill rakers. The shape of its snout is conical and the gill slits extend around the top and bottom of its head. The gill rakers are dark and bristle-like and are used to catch plankton as water filters through the mouth and over the gills. The basking shark is usually grayish-brown in colour and often seems to have a mottled appearance. The caudal (tail) fin has a strong lateral keel and a crescent shape. The teeth of the basking shark are very small and numerous and often number one hundred per row. The teeth themselves have a single conical cusp, are curved backwards and are the same on both the upper and lower jaws.

Basking sharks are a migrating species and are believed to overwinter in deep waters. They may occur in either small schools or alone. Small schools in the Bay of Fundy have been seen swimming nose to tail in circles in what may be a form of mating behavior. Basking sharks are not aggressive and generally harmless to people.

It has long been a commercially important fish, as a source of food, shark fin, animal feed, and shark liver oil. Over-exploitation has reduced its populations to the point that some have apparently disappeared and others need protection.

This shark is called the basking shark because it is most often observed when feeding at the surface and appears to be basking in the warmer water there. It is the only member of the family Cetorhinidae, part of the mackerel shark order Lamniformes. Gunnerus was the first to describe and name the species Cetorhinus maximus from a specimen found in Norway. The genus name Cetorhinus comes from the Greek, ketos which means marine monster or whale and rhinos meaning nose, the species name maximus is from Latin and means "greatest". The following centuries featured more attempts at naming: Squalus isodus, in 1819 by Macri; Squalus elephas, by Lesueur in 1822; Squalus rashleighanus, by Couch in 1838; Squalus cetaceus, by Gronow in 1854; Cetorhinus blainvillei by Capello in 1869; Selachus pennantii, by Cornish in 1885; Cetorhinus maximus infanuncula, by Deinse & Adriani 1953; and finally Cetorhinus maximus normani, by Siccardi 1961.[3] Other names include bone shark, elephant shark, hoe-mother, and sun-fish.[citation needed]

The basking shark is a coastal-pelagic shark found worldwide in boreal to warm-temperate waters around the continental shelves. It prefers 8 to 14.5 °C (46 to 58 °F) temperatures, but recently has been confirmed to cross the much-warmer waters at the equator. It is often seen close to land, including bays with narrow openings. The shark follows plankton concentrations in the water column and is therefore often visible at the surface. They characteristically migrate with the seasons.[4] The basking shark is found from the surface down to at least 910 metres (2,990 ft).[5]

They possess the typical shark lamniform body plan and have been mistaken for great white sharks. The two species can be easily distinguished, however, by the basking shark's cavernous jaw, up to 1 metre (3 ft 3 in) in width, longer and more obvious gill slits that nearly encircle the head and are accompanied by well-developed gill rakers, smaller eyes, and smaller average girth. Great whites possess large, dagger-like teeth, basking shark teeth are much smaller 5–6 millimetres (0.20–0.24 in) and hooked; only the first 3 or 4 rows of the upper jaw and 6 or 7 rows of the lower jaw function. There are also several obvious behavioral differences between the two, since the great white is an active predator of large animals and not a filter feeder.

Other distinctive characteristics include a strongly keeled caudal peduncle, highly textured skin covered in placoid scales and a mucus layer, a pointed snout—distinctly hooked in younger specimens—and a lunate caudal fin. In large individuals the dorsal fin may flop to one side when above the surface. Coloration is highly variable (and likely dependent on observation conditions and the individual's condition): commonly, the colouring is dark brown to black or blue dorsally fading to a dull white ventrally. The sharks are often noticeably scarred, possibly through encounters with lampreys or cookiecutter sharks. The basking shark's liver, which may account for 25% of its body weight, runs the entire length of the abdominal cavity and is thought to play a role in buoyancy regulation and long-term energy storage. 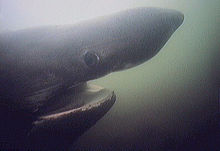 Head of a basking shark

Studies in 2003 proved that basking sharks do not hibernate, showing that they are active year-round.[7] In winter, basking sharks move to depths of up to 900 metres (3,000 ft) to feed on deep water plankton.

Satellite tagging confirms that basking sharks move thousands of kilometres during the winter months, seeking plankton blooms. It also found that basking sharks shed and renew their gill rakers in an ongoing process, rather than over one short period.[5]

A 2009 study tagged 25 sharks off the coast of Cape Cod, Massachusetts, and indicated that at least some individuals migrate south in the winter. Remaining at depths between 200 metres (660 ft) and 1,000 metres (3,300 ft) for many weeks, the tagged sharks crossed the equator to reach Brazil. One individual spent a month near the mouth of the Amazon River. It is unknown why they undertake this journey. Lead author Gregory Skomal of the Massachusetts Division of Marine Fisheries, suspects it may be related to reproduction.[5][8]

They are slow-moving sharks (feeding at about 2 knots (3.7 km/h; 2.3 mph)) and do not evade approaching boats (unlike great white sharks). They are harmless to humans if left alone and are not attracted to chum.

Even though the basking shark is large and slow, it can breach, jumping entirely out of the water.[9] This behaviour could be an attempt to dislodge parasites or commensals.[4] Such interpretations are speculative however, and difficult to falsify; breaching in large marine organisms such as whales and sharks might equally well be intraspecific threat display of size and strength. 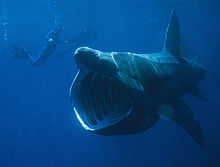 Basking sharks are social animals and form sex-segregated schools, usually in small numbers (3 or 4) but reportedly up to 100 individuals.[4] Their social behaviour is thought to follow visual cues. Although the basking shark's eyes are small, they are fully developed. They may visually inspect boats, possibly mistaking them for conspecifics.[10] Females are thought to seek shallow water to give birth.

While basking sharks have few if any predators, white sharks have been reported to scavenge on the remains of these sharks. Observers have long suspected that killer whales, also known as orcas, actively pursue and feed on basking sharks; yet, this is based upon the account of only one person, a West Cornwall fisherman who claims to have witnessed a frenzied attack by a killer whale on a large basking shark off Porthcurno more than 50 years ago.[citation needed]

Lampreys are often seen attached to them, although it is unlikely that they are able to cut through the shark's thick skin.[4]

The basking shark is a passive filter feeder, filtering zooplankton, small fish and invertebrates from up to 2,000 short tons (1,800 t) of water per hour.[3] They feed at or close to the surface with their mouths wide open and gill rakers erect. Unlike the megamouth shark and whale shark, the basking shark does not appear to actively seek quarry, but it does possess large olfactory bulbs that may guide it. It relies only on the water that it pushes through its gills by swimming; the megamouth shark and whale shark can suck or pump water through their gills.[3]

Basking sharks are ovoviviparous: the developing embryos first rely on a yolk sac, and there is no placental connection. Their seemingly useless teeth may play a role before birth in helping them feed on the mother's unfertilized ova (a behaviour known as oophagy).[11] In females, only the right ovary appears to function.

Gestation is thought to span over a year (perhaps 2 or 3 years), with a small though unknown number of young born fully developed at 1.5–2 metres (4 ft 10 in–6 ft 7 in). Only one pregnant female is known to have been caught; she was carrying 6 unborn young.[12][dead link] Mating is thought to occur in early summer and birthing in late summer, following the female's movement into shallow waters.

Historically, the basking shark has been a staple of fisheries because of its slow swimming speed, unaggressive nature and previously abundant numbers. Commercially it was put to many uses: the flesh for food and fishmeal, the hide for leather, and its large liver (which has a high squalene content) for oil.[4] It is currently fished mainly for its fins (for shark fin soup). Parts (such as cartilage) are also used in traditional Chinese medicine and as an aphrodisiac in Japan, further adding to demand.

As a result of rapidly declining numbers, the basking shark has been protected and trade in its products restricted in many countries. It is fully protected in the UK, Ireland, Malta, Florida and USA Gulf and Atlantic waters. Targeted fishing for basking sharks is illegal in New Zealand.[12] Once considered a nuisance along the Canadian Pacific coast, basking sharks were the target of a government eradication program there from 1945 to 1970. As of 2008[update], efforts are underway to determine whether any sharks still live in the area and monitor their potential recovery.[13]

It is tolerant of boats and divers approaching it and may even circle divers, making it an important draw for dive tourism in areas where it is common. 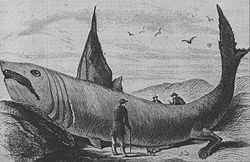 The "wonderful fish" described in Harper's Weekly on October 24, 1868, was likely the remains of a basking shark.

On several occasions, "globster" corpses initially thought to be sea serpents or plesiosaurs have later been identified as likely to be the decomposing carcasses of basking sharks, as in the Stronsay beast and the Zuiyo Maru cases.[14]