The chain catshark or chain dogfish (Scyliorhinus retifer) is a small, spotted shark that has a characteristic fluorescent activity. The species is common from George’s Bank in Massachusetts, to Nicaragua[1]. The species is considered harmless and rarely encountered by humans[2]. It has very similar reproductive traits to Scyliorhinus canicula [3].

Mikhail Matz, a professor of marine biology at the University of Florida, was the first to document the shark's previously unknown fluorescent properties[4]. A specimen that proved to be a chain catshark was filmed by Matz off the Gulf of Mexico in August 2005, a few days before Hurricane Katrina passed through the area. The purpose of the shark’s fluorescence is still unclear.

In the Mid-Atlantic Bight, the Chain dogfish is found along the outer continental shelf and upper slope. The shark occupies depths of 58 to 359 meters and occupies shallower depths in the northern region compared to southern areas. Due to the shark’s depth distribution, it has been suggested that the shark does not perform large-scale migrations[1].

Temperature is thought to limit the shark’s distribution in northern areas, particularly during the winter. Although bands of warm water at the edge of the shelf have been observed, the temperature varies seasonally, thus limiting this non-migratory species[1]. 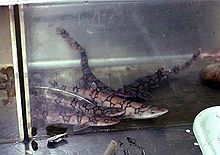 Chain catsharks in an aquarium.

The catshark spends the daytime resting at the bottom, usually in contact with certain structures. It has been observed with large burrowing cerianthid anemone tubes and boulders[1]. The bottom rubble is thought to be used as a camouflage with the shark’s spotted surface[3]. Adult sharks tend to prefer rough bottoms, creating a difficulty for trawl sampling, while the immature forms are found near smoother regions. The chain catshark has been known to feed on squid, bony fish, polychaetes and crustaceans. In aquaria, they are relatively motionless, only swimming occasionally. 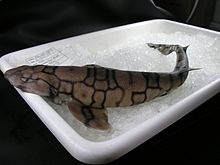 In the female chain catshark, follicle development has been correlated to nidamental gland size, thus, they are considered mature when they have a fully developed nidamental gland or shell gland[3]. This is marked by the glands growth to 18 mm or more in width. Sexual maturity in the female is seen at 520 mm in length under normal conditions. There has been evidence however that some northern populations of the shark may mature at a smaller size (410 mm).

In the male catshark, testis development is correlated to clasper size, thus maturity is marked when it develops hardened claspers that are 30 mm or more in length[3][5]. Claspers have been observed to develop after the shark is 490 mm and become mature at 500 mm.

Observed mating between the species suggests biting plays an element and that mating occurs repeatedly. Behavioral observations include the male biting the female until it can get a firm grasp and subsequently wraps its body around the female for copulation[3]. After copulation, the male releases his bite and both separate.

The chain catshark prefers vertical structures for egg deposition and always deposits eggs in pairs. The interval between pairs of eggs ranges from a few minutes to 8 days[3]. Development rates average 1mm diameter per 7.7 days although temperature has also been seen to affect follicle development[3].

The female chain dogfish is able to store sperm and lay eggs several days after initial copulation. The shark has been known to store sperm up to 843 days although, there are some circumstances of poor egg development in eggs laid later. It is suggested that this could be due to a number of factors including, senescence, low sperm viability, or water quality factors[3].

Egg cases found in the oviduct are soft, pale yellow and translucent. They also feature two coiled tendrils, a key adaptation which allows snagging on rocks or man made structures, providing grounding and safety. When deposited, they become hardened and become dark amber with white bands. [1]

Embyos take 8 – 12 months to develop due to temperature variations in the environment. The catshark lays eggs in their blastodisc form. The following exhibits a typical developmental timeline[3]:

10 mm - it has well-defined gill arches and has a thin ventral finfold. 21 mm - dorsal and pelvic fin buds appear 33 mm - embryo has protruding eyes and well-developed gill filaments. 43 mm – it has lost its translucency and develops slits in the egg case, allowing fluid exchange from surrounding seawater and the interior 58 mm – the finfold starts to decay 66 mm – the finfold and gill filaments are reduced or absent 74 mm - external appearance is complete but yolk sac is still being absorbed 100–110 mm - hatching

In an article for Aquarium Fish Magazine, Scott W. Michael described the chain catshark as "gorgeous," and "an ideal candidate" for being bred in captivity.[6]