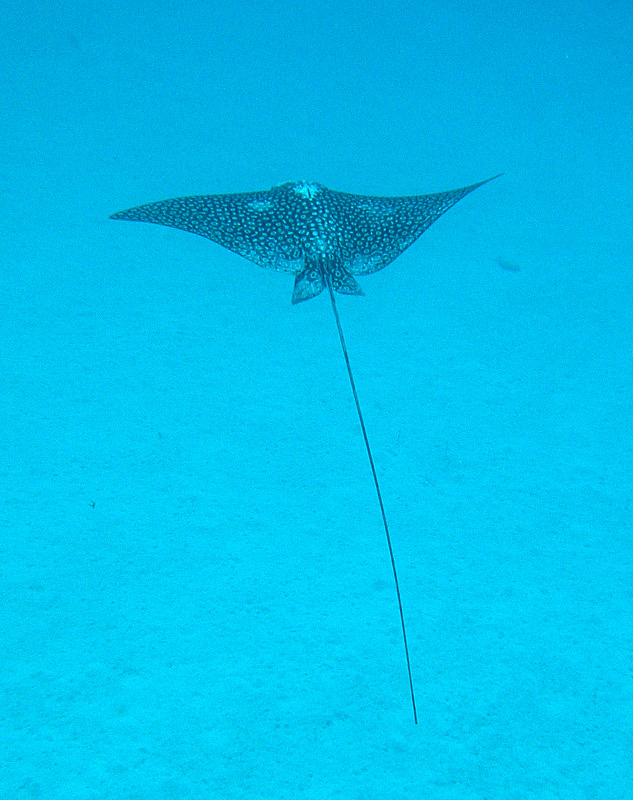 Batoidea is a of cartilaginous fish containing more than 500 described species in thirteen families. They are commonly known as rays, but that term is also used specifically for batoids in the order , the "true rays". Batoids include s, s, s, es and es.

Batoids are flat-bodied, and, like sharks, are a species of cartilaginous marine fish, meaning they have a boneless made of a tough, elastic substance. Most batoids have 5 slot-like body openings called that lead from the , have 6. [http://www.elasmo-research.org/education/shark_profiles/batoids.htm] Batoid gill slits lie under the s on the underside, whereas a shark's are on the sides of the head. Most batoids have a flat, disk-like body, with the exception of the es and sawfishes, while most sharks have a streamlined body. Many species of batoid have developed their pectoral fins into broad flat wing-like appendages. The fin is absent.

The eyes and s are located on top of the head.

Batoid eggs, unlike those of most other fishes, are fertilized inside the female's body. The eggs of all batoids except for the s (family ) hatch inside the female and are born alive (viviparous). Female skates lay internally fertilized flat, rectangular, leathery-shelled eggs, with s at the corners for anchorage. Hatched eggs of this type can be found on beaches and are known as .

Most species live on the sea floor, in a variety of geographical regions - many in coastal waters, few live in deep waters to at least convert|3000|m|ft, most batoids have a somewhat , in tropical and subtropical marine environments, temperate or cold-water species. Only a few species, like s, live in the open sea, and only a few live in freshwater. Some batoids can live in brackish bays and estuaries. Bottom-dwelling batoids breathe by taking water in through the s, rather than through the mouth as most fishes do, and passing it outward through the gills.

Most batoids have developed heavy, rounded teeth for crushing the shells of bottom-dwelling species such as , , , s, and some , depending on the species. s feed on .

Sawfishes are shark-like in form, having tails used for swimming and smaller s than most batoids. The pectoral fins are attached above the gills as in all batoids, giving the fishes a broad-headed appearance. They have long, flat snouts with a row of tooth-like projections on either side. The snouts are up to 6 ft (1.8 m) long, and 1 ft (30 cm) wide, and are used for slashing and impaling small fishes and to probe in the mud for imbedded animals. Sawfishes can enter freshwater rivers and lakes. Some species reach a total length of 20 ft (6 m).
* Family

Electric rays have organs in their wings that generate . They are used to immobilize prey and for defense. The current is strong enough to stun humans, and it is said that the used these fish for .
* Family
* Family