Medroxyprogesterone 17-acetate (also known as medroxyprogesterone acetate or MPA) is a progestin, a synthetic variant of the human hormone progesterone.[1] It is used as a contraceptive, in hormone replacement therapy and for the treatment of endometriosis as well as several other indications.

Medroxyprogesterone 17-acetate was independently discovered in 1956[3] by Syntex[4] and the Upjohn Company.[5]

In females, the most common use of MPA is as an oral or depot-injected contraceptive and also as the progestin component of menopausal hormone replacement therapy to prevent endometrial hyperplasia and cancer. MPA is also used as a treatment for endometriosis, dysmenorrhea, and amenorrhea.[7] MPA, along with other progestins were developed to allow the hormones to be taken orally, as progesterone (the hormone made by the human body) could not be taken orally before the process of micronization was developed.[8]

MPA is an extremely effective contraceptive when used with relatively high doses to prevent ovulation. It has also been used to treat benign prostatic hyperplasia, as a palliative appetite stimulant for cancer patients, and at high doses (800 mg per day) to treat hormone-dependent cancers of primarily the breast, but also other types.[10]

Though not used as a treatment for epilepsy, MPA reduces the frequency of seizures and does not interact with anti-epileptic medications. MPA does not interfere with blood clotting and appears to improve blood parameters for women with sickle cell anemia. Similarly, MPA does not appear to affect liver metabolism, and may improve primary biliary cirrhosis and chronic active hepatitis. Women taking MPA may experience spotting shortly after starting the medication but is not usually serious enough to require medical intervention. With longer use amenorrhoea can occur as can irregular menstruation which is a major source of dissatisfaction, though both can result in improvements with iron deficiency and risk of pelvic inflammatory disease and often do not result in discontinuing the medication.[10] MPA is also prescribed in combination with an estrogen to prevent endometrial hyperplasia in post-menopausal women who are undergoing hormone replacement therapy.[11]

In females, the most common adverse effects are acne, changes in menstrual flow, drowsiness, and can cause birth defects if taken by pregnant women. Other common side effects include breast tenderness, increased facial hair, decreased scalp hair, difficulty falling or remaining asleep, stomach pain, and weight loss or gain.[7]

The Women's Health Initiative investigated the use of medroxyprogesterone 17-acetate and conjugated equine estrogens compared to placebo. The study was prematurely terminated when previously-unexpected risks were discovered, specifically the finding that though the all-cause mortality was not affected by the hormone therapy, the benefits of the hormone replacement therapy (reduced risk of hip fracture, colorectal and endometrial cancer and all other causes of death) were offset by increased risk of coronary heart disease, breast cancer, strokes and pulmonary embolism.[12]

At high doses for the treatment of breast cancer, MPA can cause weight gain, worsen diabetes mellitus and edema (particularly of the face). Adverse effects peak at five weeks, and are reduced with lower doses. Less frequent effects may include thrombosis (though it is not clear if this is truly a risk, it can not be ruled out), painful urination, anxiety, headache, nausea and vomiting. When used to treat benign prostatic hyperplasia, more frequent complaints include reduced libido, impotence, reduced ejaculate volume, and within three days, chemical castration. MPA may cause reduced bone density though this appears to be reversible to a normal level even after years of use. At extremely high doses (used to treat cancer, not for contraception) MPA may cause adrenal suppression and interfere with carbohydrate metabolism but does not cause diabetes.[10]

Fetuses exposed to progesterones have demonstrated higher rates of genital abnormalities, low birth weight, and increased ectopic pregnancy particularly when MPA is used as an injected form of long-term birth control. When used as a form of injected birth control, MPA can reduce fertility for as long as 10 months, taking longer for overweight or obese women. When combined with conjugated equine estrogens (Premarin), MPA has been associated with an increased risk of breast cancer, dementia and thrombus in the eye. In combination with estrogens in general, MPA may increase the risk of cardiovascular disease, with a stronger association when used by post-menopausal women also taking CEE. MPA is not recommended for use prior to menarche or before or during recovery from surgery.[1] It was because of these unexpected interactions that the Women's Health Initiative study was ended early due the extra risks of hormone replacement therapy,[13] producing a dramatic decrease in both new and renewal prescriptions for hormone therapy.[14]

MPA is stable at room temperature.[1]

MPA is well-absorbed orally and through intramuscular injection, peaking at 2–4 hours for the former. The half life is 12 to 17 hours for an oral dose, and 50 days for an intramuscular injection. MPA binds to albumin in the blood, and is metabolized primarily through the liver via hydroxylation and conjugation.[1] Intramuscular MPA is released slowly; a 150 mg dose is first detectable in the blood 30 minutes after injection, plateauing at 1.0 ng/mL for three months, followed by a gradual, tapering decline that lasts up to nine months in some women. The high levels of MPA in the blood inhibits luteinizing hormone and ovulation for several months, with an accompanying decrease in serum progesterone to below 0.4 ng/mL. Ovulation resumes when once blood levels of MPA fall below 0.1 ng/ml. Serum estradiol remains at approximately 50 pg/nl for approximately four months post-injection (with a range of 10-92 pg/nL after several years of use), rising once MPA levels fall below 0.5 ng/ml.[15]

In females, MPA inhibits gonadotropin secretion from the pituitary which in turn prevents ovarian follicle maturation and ovulation, as well as thining the endometrium.[1]

Hot flashes are rare while MPA is found at significant blood levels in the body, and the vaginal lining remains moist and creased. The endometrium undergoes atrophy, with small, straight glands and a stroma that is decidualized. Cervical mucus remains viscous. Because of its steady blood levels over the long term and multiple effects that prevent fertilisation, MPA is a very effective means of birth control.[15]

MPA increases the risk of breast cancer, dementia and thrombus when used in combination with conjugated equine estrogens to treat the symptoms of menopause.[1] When used as a contraceptive, MPA does not generally interact with other drugs. When combined with aminoglutethimide to treat metastases from breast cancer, MPA is associated with an increase in depression.[10] St John's wort may decrease its effectiveness as a contraceptive.[1]

Proponents of bioidentical hormone replacement therapy believe progesterone offers fewer side effects and improved quality of life compared to medroxyprogesterone acetate.[16] The evidence for this view has been questioned; medroxyprogesterone is better absorbed when taken orally, with a much longer half life leading to more stable blood levels[17] though it may lead to greater breast tenderness and more sporadic vaginal bleeding.[16] The two compounds do not differentiate in their ability to suppress endometrial hyperplasia,[16] nor does either increase the risk of pulmonary embolism.[18] The two compounds have not been adequately compared in direct tests to clear conclusions about safety and superiority.[8]

Medroxyprogesterone 17-acetate can be prepared by the following sequence:[19] 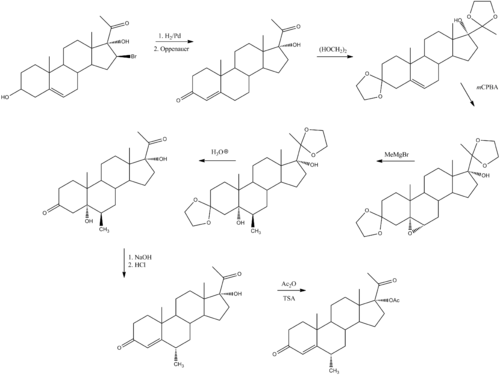