City of Greater Geelong
This article is about a local government area. For the city centre of Geelong, see Geelong city centre, Victoria.

The City of Greater Geelong is a Local Government Area in Victoria, Australia.

It is located in the western part of the state, south-west of Melbourne. It has an area of 1,240 square kilometres. In 2006 it had a population of 191,000. The council chambers are located at the Civic Conference and Reception Centre, a part of the Geelong Town Hall in central Geelong. 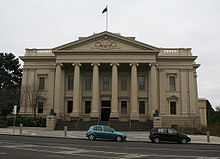 Sourced from Appendix V, A Journey to Destiny 1890-1990 - 100 Years of Cement Manufacturing at Fyansford by Australian Cement Limited .[3] 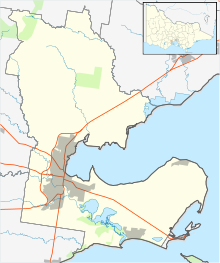 City of Greater Geelong and urban areas including Geelong

Each ward is represented by one elected Councillor.

The 2008 Victorian Council elections, were for the first time in history held on the same day throughout Victoria for all councils, Saturday 29 November 2008. A postal ballot was held for the City of Greater Geelong, conducted in the week prior to ballots closing at 6.00 pm on Friday 28 November 2008.

Forty-three individuals stood for election to the twelve vacancies available on the council. Lou Brazier and Tom O'Connor were the only sitting councillors of the ten members contesting the election to lose. Tony Ansett (Windermere Ward) and Peter McMullin (Buckley Ward) did not stand for re-election.

John Doull defeated sitting councillor Tom O'Connor in Coryule Ward. Doull led by 127 votes after first preferences but won by a considerable margin. O'Connor had caused some controversy after first being elected to Council in November 2004 when he claimed that he had not spoken to prominent Geelong businessman and (then) Geelong Football Club President, Frank Costa. Costa later confirmed that he had met and spoken with O'Connor.

Immediately prior to the election, Brazier became embroiled in controversy regarding a possible conflict of interest issue resulting from two votes taken at council meetings. Brazier's re-election prospects were damaged by these latest matters, which followed on from the conflict of interest issues that arose from the 2004 council elections and became more commonly known throughout the community as "Costa-gate", which dogged the 2004-2008 council and led to a municipal investigation by Merv Whelan.

Former Mayor 'Stretch' Kontelj claimed the most primary votes of any candidate with 6,180 votes. Councillors Farrell, Katos, Macdonald and Mitchell were all re-elected unopposed.

David Saunderson, along with four other Labor councillor candidates, received a donation for the 2004 elections from developer Lascorp. Saunderson admitted in the Geelong Magistrates' Court in November 2009 that he was "stupid and foolish" not to declare a conflict of interest during a vote at a meeting of the city council in April 2009 involving the developer. Saunderson pleaded not guilty in court, but was found guilty and fined $18,000 ($3,000 fine and $15,000 in costs). His conviction requires the city to call a by-election for the Cowie ward seat.

Councillor Cameron Granger was also involved in conflict of interest charges in 2009. He appeared before a Geelong Court and was cleared.

The 2010 Cowie ward by-election, caused by the forced vacation of the seat by former Cr David Saunderson, was contested by several candidates over the weekend of 6 and 7 March 2010. Eddy Kontelj, brother of sitting councillor 'Stretch' Kontelj, won the seat with 5,665 votes from Matt Podvinsek (2,391) and former Shire of Corio councillor Vinko Ljubanovic (1,135).

The 2011 Deakin ward by-election, caused by the vacation of the seat by former Cr Andrew Katos, who had won the State seat of South Barwon at the November 2010 Victorian State election, will be held on Saturday 5 March 2011.

Kakouros, Nelson and Podvinsek have been previous nominees for council seats. Kakouros has also been a nominee for both State and Federal seats.

The council is composed of twelve councillors, each elected to represent one of the twelve existing wards.

Jetstar Airways has its headquarters on the grounds of Avalon Airport in Avalon, City of Greater Geelong.[5][6][7]

Geelong has sister city relations with the following cities[8]: