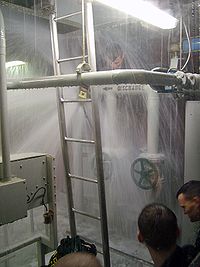 Naval Submarine Base New London is the United States Navy's primary submarine base, the "Home of the Submarine Force", and "the Submarine Capital of the World".

In 1868, the State of Connecticut gave the Navy 112 acres (0.5 km²) of land along the Thames River to build a Naval Station. Due to a lack of federal funding, it was not until 1872 that two brick buildings and a "T" shaped pier were constructed and officially declared a Navy Yard. This new yard was primarily used as a coaling station by Atlantic Fleet small craft. It is located in the towns of Groton and Ledyard.

On October 13, 1915, the monitor Ozark, a submarine tender, and 4 submarines arrived in Groton. With the war effort in Europe and the Atlantic in full swing, additional submarines and support craft arrived the following year and the facility was named as the Navy's first Submarine Base. Although physically located in Groton, CT, the base had their main offices and housing in the larger city of New London, hence was christened as Naval Submarine Base New London. Following World War I, the Navy established schools and training facilities at the base.

On January 21, 1954 the first nuclear-powered submarine, the USS Nautilus, was launched from Groton. In 1982 the Nautilus was designated a National Historic Landmark in Groton. It is permanently moored south of the main gate, attached to the U.S. Submarine Force Museum. Self guided tours are available to the public every day except Tuesday.

As homeport to fifteen attack submarines and neighbor to a major submarine construction yard, General Dynamics' Electric Boat Corporation, all Officer and Enlisted submariners with the exception of nuclear trained Electronics Technicians (ETs), Electrician's Mates (EMs), and Machinist Mates (MMs), will be stationed at Groton for training, on board an attack submarine or with a pre-commissioning crew for a new submarine. Enlisted sailors attending sub school will first go through Basic Enlisted Sub School (BESS), an 8 week program that teaches the rigors of undersea life. BESS includes training in shoring, patching leaks and ruptured pipes, firefighting, and boat handling techniques. After BESS, sailors will either go to a boat or to follow-on schools. Schools include BMS, AUXPAC, ATT, TCNO, or an A school, depending on their rating. The A Schools housed at NAVSUBASE NLON are SECF, SCERF, AUXPAC, TM "A".

Base Realignment and Closure, 2005

On May 13, 2005, the Pentagon recommended that the base be closed. After review, the Base Realignment and Closure commission voted on August 24, 2005 to strike New London from the list of possible closures, thus allowing the base to remain open.