Military budget of the United States

Military budget of the United States

The military budget is that portion of the United States discretionary federal budget that is allocated to the Department of Defense, or more broadly, the portion of the budget that goes to any defense-related expenditures. This military budget pays the salaries, training, and health care of uniformed and civilian personnel, maintains arms, equipment and facilities, funds operations, and develops and buys new equipment. The budget funds all branches of the U.S. military: Army, Navy, Air Force, Marine Corps and Coast Guard.

For the 2010 fiscal year, the president's base budget of the Department of spending on "overseas contingency operations" brings the sum to $663.84 billion.[1][2]

When the budget was signed into law on October 28, 2009, the final size of the Department of Defense's budget was $680 billion, $16 billion more than President Obama had requested.[3] An additional $37 billion supplemental bill to support the wars in Iraq and Afghanistan was expected to pass in the spring of 2010, but has been delayed by the House of Representatives after passing the Senate.[4][5]

By the end of 2008, the U.S. had spent approximately $900 billion in direct costs on the Iraq and Afghanistan Wars. Indirect costs such as interest on the additional debt and incremental costs of caring for the more than 33,000 wounded borne by the Veterans Administration are additional. Some experts estimate these indirect costs will eventually exceed the direct costs.[7]

The federally budgeted (see below) military expenditure of the United States Department of Defense for fiscal year 2010, including the wars in Iraq and Afghanistan, is[8]:

This does not include many military-related items that are outside of the Defense Department budget, such as nuclear weapons research, maintenance, cleanup, and production, which is in the Department of Energy budget, Veterans Affairs, the Treasury Department's payments in pensions to military retirees and widows and their families, interest on debt incurred in past wars, or State Department financing of foreign arms sales and militarily-related development assistance. Neither does it include defense spending that is not military in nature, such as the Department of Homeland Security, counter-terrorism spending by the FBI, and intelligence-gathering spending by NASA.

Audit of Implementation of Budget for 2010

The US Government Accountability Office was unable to provide an audit opinion on the 2010 financial statements of the US Government because of 'widespread material internal control weaknesses, significant uncertainties, and other limitations'.[13] The GAO cited as the principal obstacle to its provision of an audit opinion 'serious financial management problems at the Department of Defense that made its financial statements unauditable'.[13]

Chief Financial Officer and Under Secretary of Defense Robert F. Hale acknowledged enterprise-wide problems with systems and processes,[15] while the DoD's Inspector General reported 'material internal control weaknesses ... that affect the safeguarding of assets, proper use of funds, and impair the prevention and identification of fraud, waste, and abuse'.[16] Further management discussion in the FY 2010 DoD Financial Report states 'it is not feasible to deploy a vast number of accountants to manually reconcile our books' and concludes that 'although the financial statements are not auditable for FY 2010, the Department's financial managers are meeting warfighter needs'.[17]

World War II commenced a new era of permanency in the United States defense budget. With the advent of the Cold War, the United States began to maintain a standing army and a permanent state of readiness for war that permanently elevated national defense expenditures. At the conclusion of his second term, President Eisenhower, wrote:

Our military organization today bears little relation to that known by any of my predecessors in peacetime, or indeed by the fighting men of World War II or Korea. Until the latest of our world conflicts, the United States had no armaments industry. American makers of plowshares could, with time and as required, make swords as well. But now we can no longer risk emergency improvisation of national defense; we have been compelled to create a permanent armaments industry of vast proportions. Added to this, three and a half million men and women are directly engaged in the defense establishment. We annually spend on military security more than the net income of all United States corporations. This conjunction of an immense military establishment and a large arms industry is new in the American experience. The total influence -- economic, political, even spiritual -- is felt in every city, every State house, every office of the Federal government. We recognize the imperative need for this development. Yet we must not fail to comprehend its grave implications. Our toil, resources and livelihood are all involved; so is the very structure of our society. In the councils of government, we must guard against the acquisition of unwarranted influence, whether sought or unsought, by the military industrial complex. The potential for the disastrous rise of misplaced power exists and will persist. We must never let the weight of this combination endanger our liberties or democratic processes. We should take nothing for granted. Only an alert and knowledgeable citizenry can compel the proper meshing of the huge industrial and military machinery of defense with our peaceful methods and goals, so that security and liberty may prosper together.[24]

The U.S. Department of Defense budget accounted in fiscal year 2010 for about 19% of the United States federal budgeted expenditures and 28% of estimated tax revenues. Including non-DOD expenditures, defense spending was approximately 28–38% of budgeted expenditures and 42–57% of estimated tax revenues.[citation needed] According to the Congressional Budget Office, defense spending grew 9% annually on average from fiscal year 2000–2009.[25]

For FY 2010, Department of Defense spending amounts to 4.7% of GDP.[28] Because the U.S. GDP has risen over time, the military budget can rise in absolute terms while shrinking as a percentage of the GDP. For example, the Department of Defense budget is slated to be $664 billion in 2010 (including the cost of operations in Iraq and Afghanistan previously funded through supplementary budget legislation[29][30]), higher than at any other point in American history, but still 1.1–1.4% lower as a percentage of GDP than the amount spent on defense during the peak of Cold-War military spending in the late 1980s.[28] Admiral Mike Mullen, Chairman of the Joint Chiefs of Staff, has called four percent an "absolute floor".[31] This calculation does not take into account some other defense-related non-DOD spending, such as Veterans Affairs, Homeland Security, and interest paid on debt incurred in past wars, which has increased even as a percentage of the national GDP.

Comparison with other countries

Military spending as a percentage of GDP

The 2009 U.S. military budget accounts for approximately 40% of global arms spending and is over six times larger than the military budget of China (compared at the nominal US dollar / Renminbi rate, not the PPP rate). The United States and its close allies are responsible for two-thirds to three-quarters of the world's military spending (of which, in turn, the U.S. is responsible for the majority).[32][33][34] 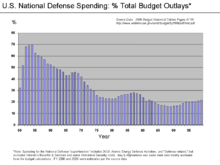 In February 2009, Congressman Barney Frank, D-Mass., called for a reduction in the defense budget: "The math is compelling: if we do not make reductions approximating 25 percent of the military budget starting fairly soon, it will be impossible to continue to fund an adequate level of domestic activity even with a repeal of Bush's tax cuts for the very wealthy. I am working with a variety of thoughtful analysts to show how we can make very substantial cuts in the military budget without in any way diminishing the security we need...[American] well-being is far more endangered by a proposal for substantial reductions in Medicare, Social Security or other important domestic areas than it would be by canceling weapons systems that have no justification from any threat we are likely to face."[37]

Republican historian Robert Kagan has argued that 2009 is not the time to cut defense spending, relating such spending to jobs and support for allies: "A reduction in defense spending this year would unnerve American allies and undercut efforts to gain greater cooperation. There is already a sense around the world...that the United States is in terminal decline. Many fear that the economic crisis will cause the United States to pull back from overseas commitments. The announcement of a defense cutback would be taken by the world as evidence that the American retreat has begun."[38]

Secretary of Defense Robert Gates wrote in 2009 that the U.S. should adjust its priorities and spending to address the changing nature of threats in the world: "What all these potential adversaries—from terrorist cells to rogue nations to rising powers—have in common is that they have learned that it is unwise to confront the United States directly on conventional military terms. The United States cannot take its current dominance for granted and needs to invest in the programs, platforms, and personnel that will ensure that dominance's persistence. But it is also important to keep some perspective. As much as the U.S. Navy has shrunk since the end of the Cold War, for example, in terms of tonnage, its battle fleet is still larger than the next 13 navies combined—and 11 of those 13 navies are U.S. allies or partners."[39] Secretary Gates announced some of his budget recommendations in April 2009.[40]

The Congressional Research Service has noted a discrepancy between a budget that is declining as a percentage of GDP while the responsibilities of the DoD have not decreased and additional pressures on the defense budget have arisen due to broader missions in the post-9/11 world, dramatic increases in personnel and operating costs, and new requirements resulting from wartime lessons in the Iraq War and Operation Enduring Freedom.[41][dead link]