Nystatin is a polyene antifungal drug to which many molds and yeast infections are sensitive, including Candida. Due to its toxicity profile, there are currently no injectable formulations of this drug on the US market.[1] However, nystatin may be safely given orally as well as applied topically due to its minimal absorption through mucocutaneous membranes such as the gut and the skin.[2][3]

Cutaneous, vaginal, mucosal and esophageal Candida infections usually respond well to treatment with nystatin. Cryptococcus is also sensitive to nystatin. In the UK its licence for treating neonatal oral thrush is restricted to those over the age of one month (miconazole is an appropriate alternative for younger babies).[citation needed]

Nystatin is often used as prophylaxis in patients who are at risk for fungal infections, such as AIDS patients with a low CD4+ count and patients receiving chemotherapy.

It is prescribed in units, with doses varying from 100,000 (for oral infections) to 1 million (for intestinal ones). As it is not absorbed from the gut, it is safe for oral use and does not have problems of drug interactions.

It is also used in cellular biology as an inhibitor of the lipid raft-caveolae endocytosis pathway on mammalian cells, at concentrations around 3 µg/mL. 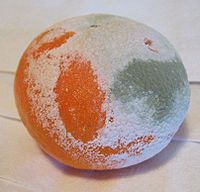 Penicillium-infested tangerine. The spot absent of growth had nystatin applied to it before the fungus covered the fruit.

In certain cases, nystatin has been used to prevent the spread of mold on objects such as works of art. For example, it was applied to wood panel paintings damaged as a result of the Arno River Flood of 1966 in Florence, Italy.

Nystatin is also used as a tool by scientists performing "perforated" patch-clamp electrophysiologic recordings of cells. When loaded in the recording pipette, it allows for measurement of electrical currents without washing out the intracellular contents, because it forms pores in the cell membrane that are permeable to only monovalent ions.[4]

Like amphotericin B and natamycin, nystatin binds to ergosterol, a major component of the fungal cell membrane. When present in sufficient concentrations, it forms pores in the membrane that lead to K+ leakage and death of the fungus. Ergosterol is fairly unique to fungi, so the drug does not have such catastrophic effects on animals.

Like many other antifungals and antibiotics, nystatin is of bacterial origin. It was isolated from Streptomyces noursei in 1950 by Elizabeth Lee Hazen and Rachel Fuller Brown, who were doing research for the Division of Laboratories and Research of the New York State Department of Health. Hazen found a promising micro-organism in the soil of a friend's dairy farm. She named it Streptomyces noursei, after William Nourse, the farm's owner.[5] Hazen and Brown named nystatin after the New York State Public Health Department (now known as the Wadsworth Center) in 1954.