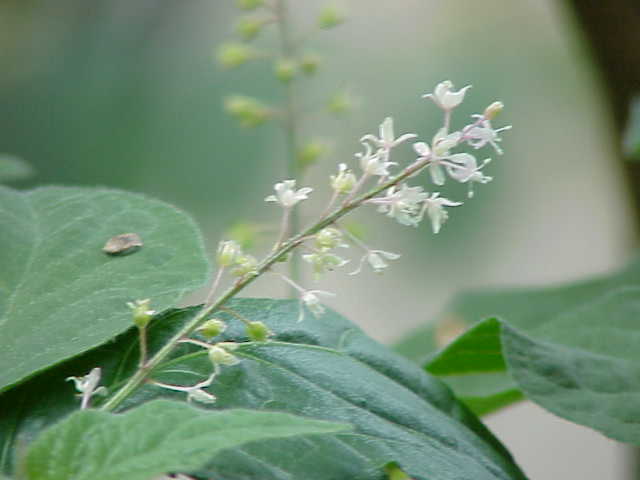 Patchouli (also patchouly or pachouli) is a bushy of the mint family, with erect stems, reaching two or three feet (about 0.75 metre) in height and bearing small pale pink-white flowers. The plant is native to tropical regions of Asia and is now extensively cultivated in countries, , , , , , , and .

Known in the western world as that "Weird Hippy Smell", the scent of patchouli is heavy and strong. It has been used for centuries in s and continues to be so today. The word derives from the Tamil "patchai" பச்சை (green), "ellai" இலை (leaf).

"Pogostemon cablin", "P. commosum", "P. hortensis", "P. heyneasus" and "P. plectranthoides" are all cultivated for their oils and all are known as 'patchouli' oil, but "P. cablin" is considered superior.

Extraction of the essential oil

Extraction of the is by , requiring the cell walls of the leaves to be first ruptured. This can be achieved by steam scalding, light fermentation, or by drying.

Leaves are harvested several times a year, and where dried may be exported for distillation of the oil. Sources disagree over how to obtain the best quality oil. Some claim the highest quality oil is usually produced from fresh leaves, distilled close to the plantation,

In Europe and the US, patchouli oil and underwent a surge in popularity in the 1960s and 1970s, mostly among devotees of the and lifestyles. It has also been used as a hair conditioner for . One study suggests Patchouli oil may serve as an outdoor insect repellent.

The plant and oil have a number of claimed health benefits in herbal folk-lore, and its scent is used with the aim of inducing relaxation. Chinese medicine uses the herb to treat headaches, colds, nausea, diarrhea and abdominal pain. Patchouli oil can be purchased from mainstream Western pharmacies and sources as an oil.

Patchouli is also in widespread use in modern industry. It is a popular component in s, including more than half of perfumes for menFact|date=June 2007. Patchouli is also an important ingredient in East Asian . It is also used as a scent in products like towels, laundry s, and air fresheners. Two important components of the essential oil is and .

During the 18th and 19th century silk traders from China travelling to the Middle East packed their cloth with dried patchouli leaves to prevent s from laying their eggs on the cloth.Fact|date=October 2008 Many historians speculate that this association with opulent eastern goods is why patchouli was considered by Europeans of that era to be a luxurious scent. It is said that Patchouli was used in the linen chests of in this way. Fact|date=June 2008.

Patchouli grows well in warm to tropical climates. It thrives in hot weather but not direct . If the plant withers due to lack of watering it will recover well and quickly once it has been watered. The seed-bearing flowers are very fragrant and bloom in late fall. The tiny seeds may be harvested for planting, but they are very delicate and easily crushed. Cuttings from the mother plant can also be rooted in water to produce further plants.