Panoramic view of the CSUSB campus against the San Bernardino Mountains. (2009)

Built atop 441 acres (178 ha) of bedrock on the city’s north side, CSUSB is framed to the north by the San Bernardino Mountains. More than 1,300,000 square feet (120,000 m2) of new facilities have been built to meet students' academic and social needs. Campus residential housing provides more than 1,500 beds.

A new College of Education building opened in 2008.[9] The Santos Manuel Student Union has doubled in size in recent years, and a new 35,000-square-foot (3,300 m2) Student Recreation and Fitness Center was completed in 2007. Other recently constructed facilities include the Social and Behavioral Sciences and Chemical Sciences buildings.[10]

The John M. Pfau Library, named after the university’s first president, sits at the very center of the campus. Other distinctive university landmarks include: the clock tower above the Santos Manuel Student Union, the Robert V. Fullerton Art Museum, and the rounded, steel-rimmed James & Aerianthi Coussoulis Arena, a modern, 4,000-plus seat sports and events venue—one of the largest indoor arenas in the Inland Empire.

In 2009, the university received a major donation from the Pauline Murillo family to construct a $2 million research observatory on the campus. The W.M. Keck Foundation and the California Portland Cement Co. also made substantial contributions.[11]

The Robert and Frances Fullerton Museum of Art (formerly the Robert V. Fullerton Art Museum) is among the 4 percent of museums in the United States accredited by the American Association of Museums. The RAFFMA's permanent collections consist of three distinct kinds of art: ancient, ceramic, and contemporary. A world-class collection of about 200 Egyptian artifacts and a smaller selection of Italian pottery are part of the museum's permanent holdings. Rotating shows feature artists from throughout the region and country. One gallery of the museum is dedicated to exhibiting the work of the school's own art students. The museum celebrated its 10th anniversary in 2006 and received accreditation by the American Association of Museums in 2008.[12][13] 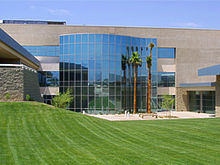 A health sciences building for the four-year nursing program opened on the Palm Desert Campus in October 2008.[15]

The Palm Desert Campus is unique for having been built entirely with private funds. This unique public-private partnership at CSUSB’s Palm Desert Campus has drawn national attention and was featured in a front page story in the Sunday, Aug. 5, 2003, edition of the New York Times.[16]

The John M. Pfau Library sits at the center of the San Bernardino campus. 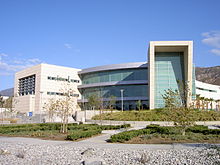 The university offers 100 degree, credential and certificate programs and is organized into six academic colleges: 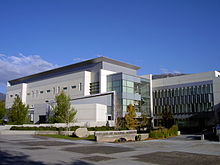 Cal State San Bernardino has taken a leading role in furthering the study and understanding Middle Eastern Cultures, and is the only CSU campus offering Arabic language and Islamic history courses.[18] CSUSB offers degrees in accounting and finance, computer science and engineering, geographic information and decision sciences, nursing, health, psychology and public administration, among many others.

CSUSB’s University Center for Developmental Disabilities is a clinical training program that provides evaluation, assessment, training, and support for autistic children, their parents, and siblings.[18] 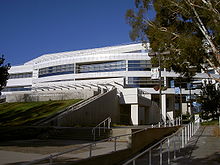 College of Social and Behavioral Sciences

Many CSUSB programs have earned specialized national accreditation, including the business program, which was the first in the Inland Empire to gain such accreditation at both the graduate and undergraduate levels. The business and entrepreneurship programs are nationally recognized, as evidenced by CSUSB's 2006 ranking of fourth in the United States for graduate entrepreneur programs. The university's College of Business and Public Administration was also listed in the 2008 edition of The Princeton Review's "Best 290 Business Schools." In 2011, California State University, San Bernardino’s College of Business and Public Administration was recognized by European CEO Magazine as one of the top 20 schools of business in the world and one of the world's 18 most innovative business schools. [19] [20]

The National Security Studies master of arts program is a highly regarded,[21] two-year program that offers a comprehensive curriculum for students interested in pursuing careers in national service. It is one of three such programs in the country and the only one in the California State University system. The university also has collaborative educational programs with nearby Fort Irwin.[22] In addition, CSUSB's advanced accounting students provide free tax preparation services to local low-income, elderly, disabled, non-English-speaking residents.[23][24]

The university is one of the region's largest teacher-training institutions. In 2007, the university welcomed its first class of doctoral degree candidates.[25] The Ed.D. in educational leadership is a research-based program that prepares pre-K through 12 and community college leaders to contribute to the study, development and implementation of educational reforms.[26] 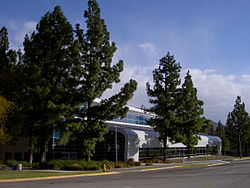 Admission to CSUSB is based on a combination of the applicant's high school cumulative grade point average (GPA) and standardized test scores. These factors are used to determine the applicant's California State University (CSU) eligibility index. More specifically, the eligibility index is a weighted combination of high school grade point average during the final three years of high school and a score on either the SAT or ACT. The average grade point average for incoming freshmen is 3.34.[28] The average composite ACT score was 20 and the average SAT score was 900.[29] Overall, 19.1% of applicants are accepted to CSUSB.[30] Enrollment has increased by more than a third in recent years, and freshman enrollment has doubled. Due to the large number of applicants in the Fall 2010 quarter, CSUSB has declared "campus impaction" for the first time in its history.[31] More than 70 percent of CSUSB students are the first generation of their families to attend college. Latino and African American student enrollments are the third highest of any university in California. CSUSB students are awarded on average 13 percent of CSU system scholarships, despite representing only 4 percent of the CSU's overall enrollment. Fifty-seven percent of full-time undergraduate students at CSUSB receive sufficient scholarships and grants to pay all fees and another 10 percent pay less than the full fees. Almost 75 percent of CSUSB students receive financial aid.[32] More than three quarters of the incoming 2009 freshmen class required remediation in either English or Math or both.[33]

Initiated in 2002 by university president, Albert K. Karnig, the President’s Academic Excellence Scholarship program invites the top 1 percent of graduating high school seniors in San Bernardino County to attend Cal State San Bernardino. The program provides a full scholarship, including tuition, books and a small stipend, to eligible students and is renewable for up to four academic years. The program is designed to attract the best and brightest students to CSUSB who might otherwise be lured to colleges outside the area. As of fall 2010, there were 132 enrolled presidential scholars.[35] The first major donor to this program was Evelyn Magnuson, who extended her legacy in 2008 through a planned gift making CSUSB a beneficiary of her $2.4 million estate. 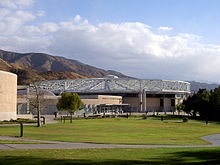 Like many other universities, much of the student life on campus revolves around extensive local outreach and retention programs. In addition to having the third highest Hispanic and African American student population of any university in California, CSUSB also has a very diverse campus of different ethnicities and nationalities. CSUSB is home to over more than 100 student clubs and organizations, including academic, cultural, religious, service and political organizations.[36]

Cal State San Bernardino's residence halls, which are referred to as "The Villages,"[37] consist of three structures—Serrano Village, Arrowhead Village, and the University Village—which houses more than 1,500 students in single and double rooms.[38]

Student media organizations include the Coyote Chronicle, the student newspaper that is a part of the college media network,[39] and Coyote Radio,[40] a popular station for music, local news, talk and campus information. It is also one of only 50 college stations around the world listed as an official iTunes college station.[41] Coyote Radio recently became the home and partner to Isla Earth, the award-winning radio science program. The Coussoulis Arena is a popular site for concerts, entertainment activities, commencement ceremonies and also serves kinesiology students.[42]

The first fraternity established at CSUSB was the prestigious Alpha Kappa Psi in 1972. Furthermore, since that time with the support of alumni and University advisors, CSUSB has seen the establishment of 15 social fraternity and sorority chapters managed by Student Leadership and Development. At least eight or more fraternities are co-ed and are either major related, honor related, or community service related.

In 2009, CSUSB intercollegiate athletics celebrated its 25th anniversary. Established in 1984, the program offers men's and women's basketball and soccer, men's golf and baseball and women's softball, tennis, cross country, water polo, volleyball and consiting of cheer and song the Coyote Spirit Squad. The school's athletic mascot is the Coyote and the school colors are blue (Pantone 300) and black.

The Coyotes play in the California Collegiate Athletic Association (CCAA) in the NCAA's Division II. The men's and women's basketball and women's volleyball teams play in the James & Aerianthi Coussoulis Arena, and the baseball team plays at Arrowhead Credit Union Park in Downtown San Bernardino.

Since 1984, the Coyotes have taken many local and regional championships and regularly finish high up in national tournaments. The men’s soccer team went to the NCAA Division III national semifinals in 1987 and captured the university’s first NCAA Division II California Collegiate Athletic Association title in 1991. In 1997, Scott Householder grabbed the university’s sole national championship to date with a 273 for 72 holes, a record that still stands.[citation needed] Men’s golf has finished third in the national tournament three times in its history.

There are currently five CSUSB alumni serving in the California Legislature: