Observatory
This article is about scientific observatories. For the suburb of Cape Town, see Observatory, Cape Town. For other uses, see The Observatory (disambiguation). 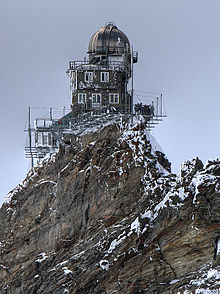 The Sphinx Observatory at the Jungfraujoch in the Swiss Alps; high altitude observatories are less affected by the atmosphere.

An observatory is a location used for observing terrestrial and/or celestial events. Astronomy, climatology/meteorology, geology, oceanography and volcanology are examples of disciplines for which observatories have been constructed. Historically, observatories were as simple as containing an astronomical sextant (for measuring the distance between stars) or Stonehenge (which has some alignments on astronomical phenomena).

Ground-based observatories, located on the surface of Earth, are used to make observations in the radio and visible light portions of the electromagnetic spectrum. Most optical telescopes are housed within a dome or similar structure, to protect the delicate instruments from the elements. Telescope domes have a slit or other opening in the roof that can be opened during observing, and closed when the telescope is not in use. In most cases, the entire upper portion of the telescope dome can be rotated to allow the instrument to observe different sections of the night sky. Radio telescopes usually do not have domes.

For optical telescopes, most ground-based observatories are located far from major centers of population, to avoid the effects of light pollution. The ideal locations for modern observatories are sites that have dark skies, a large percentage of clear nights per year, dry air, and are at high elevations. At high elevations, the Earth's atmosphere is thinner thereby minimizing the effects of atmospheric turbulence and resulting in better astronomical "seeing".[1] Sites that meet the above criteria for modern observatories include the southwestern United States, Hawaii, Canary Islands, the Andes, and high mountains in Mexico such as Sierra Negra.[2] Major optical observatories include Mauna Kea Observatory and Kitt Peak National Observatory in the USA, Roque de los Muchachos Observatory in Spain, and Paranal Observatory in Chile.

Specific research study performed in 2009 shows that the best possible location for ground-based observatory on Earth is Ridge A - a place in the central part of Eastern Antarctica.[3] This location provides the least atmospheric disturbances and best visibility.

Beginning in 1930s, radio telescopes have been built for use in the field of radio astronomy to see space very close up. Such an instrument, or a collection of them, with outbuildings for such things as control centres, data reduction centers, and maintenance are called radio observatories. Radio observatories are similarly located far from major centers of population to avoid electromagnetic interference (EMI) from radio, TV, radar, and other EMI emitting devices. But unlike optical observatories, radio observatories will be placed in valleys to further shield them from EMI. Some of the major radio observatories are at Socorro, in New Mexico, USA, Jodrell Bank in the UK, Arecibo, Puerto Rico, Parkes in New South Wales, Australia and Chajnantor in Chile.

Since the mid-20th century, a number of astronomical observatories have been constructed at very high altitudes, above 4000–5000 m (13,000-16,000 ft). The largest and most notable of these is the Mauna Kea Observatory, located near the summit of a 4205 m (13,796 ft) volcano in Hawaii. The Chacaltaya Astrophysical Observatory in Bolivia, at 5230 m (17,160 ft), was the world's highest permanent astronomical observatory[4] from the time of its construction during the 1940s until 2009. It has now been surpassed by the new University of Tokyo Atacama Observatory,[5] an optical-infrared telescope on a remote 5640 m (18,500 ft) mountaintop in the Atacama Desert of Chile.

The oldest proto-observatories, in the sense of a private observation post,[6] include:

Remains of the Maragheh observatory now under a modern protective dome at Maragheh, Iran. 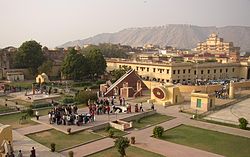 The oldest true observatories, in the sense of a specialized research institute,[7][8][9] include:

Space-based observatories are telescopes or other instruments that are located in outer space, many in orbit around the Earth. Space-based observatories can be used to observe astronomical objects at wavelengths of the electromagnetic spectrum that cannot penetrate the Earth's atmosphere and are thus impossible to observe using ground-based telescopes. The Earth's atmosphere is opaque to ultraviolet radiation, X-rays, and gamma rays and is partially opaque to infrared radiation so observations in these portions of the electromagnetic spectrum are best carried out from a location above the atmosphere of our planet.[13] Another advantage of space-based telescopes is that, because of their location above the Earth's atmosphere, their images are free from the effects of atmospheric turbulence that plague ground-based observations.[14] As a result, the angular resolution of space telescopes such as the Hubble Space Telescope is often much smaller than a ground-based telescope with a similar aperture. However, all these advantages do come with a price. Space telescopes are much more expensive to build than ground-based telescopes. Due to their location, space telescopes are also extremely difficult to maintain. The Hubble Space Telescope was serviced by the Space Shuttle while many other space telescopes cannot be serviced at all.

Airborne observatories have the advantage of height over ground installations, putting them above most of the Earth's atmosphere. But they also have an advantage over space telescopes - the instruments can be deployed, repaired, updated much more quickly and inexpensively. The Kuiper Airborne Observatory and the Stratospheric Observatory for Infrared Astronomy use airplanes to observe in the infrared, which is absorbed by water vapor in the atmosphere. Balloons for X-ray astronomy have been used in a variety of countries.