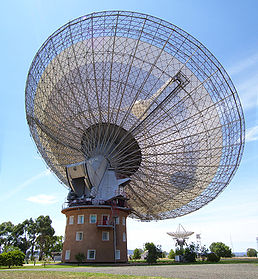 The Parkes radio telescope can tilt 60° from vertical and would take 15 minutes to perform a 360° rotation.

The Parkes Observatory is a radio telescope observatory, 20 kilometres north of the town of Parkes, New South Wales, Australia. It was one of several radio antennas used to receive live, televised images of the Apollo 11 moon landing on 20 July 1969.

The Parkes Radio Telescope, completed in 1961, was the brainchild of E.G. (Taffy) Bowen, chief of the CSIRO's Radiophysics Laboratory. During the Second World War, he had worked on radar development in the US and had made some powerful friends in the scientific community. Calling on this old boy network, he persuaded two philanthropic organisations, the Carnegie Corporation and the Rockefeller Foundation to fund half the cost of the telescope. It was this recognition and key financial support from the US that persuaded then Prime Minister Robert Menzies to agree to fund the rest of the project.[1]

The primary observing instrument is the 64-metre movable dish telescope, second largest in the Southern Hemisphere, and one of the first large movable dishes in the world (DSS-43 'Deep Space Station'-43 at Tidbinbilla was extended from 64 m to 70 m in 1987, surpassing Parkes).[2] After its completion it has operated almost continuously to the present day. The dish surface was physically upgraded by adding smooth metal plates to the central part to provide focusing capability for centimetre and millimetre length microwaves. The outer part of the dish remains a fine metal mesh, creating its distinctive two-tone appearance.

The 18m dish antenna in the foreground of the photo was transferred from the Fleurs Observatory (Mills Cross) in 1963. Mounted on rails and powered by a tractor engine to allow the distance between it and the main dish to be easily varied, it was used as an interferometer with the main dish, and as a transmit uplink antenna in the Apollo program. It has been abandoned since the early 1980s.

The telescope has an altazimuth mount. It is guided by a small mock-telescope placed within the structure at the same rotational axes as the dish, but with an equatorial mount. The two are dynamically locked when tracking an astronomical object by a laser guiding system. This primary-secondary approach was designed by Barnes Wallis.

The success of the Parkes telescope led NASA to copy the basic design in their Deep Space Network, with matching 64 m dishes built at Goldstone, Madrid and Tidbinbilla.

The receiving cabin is located at the focus of the parabolic dish, supported by three struts 27 metres above the dish. The cabin contains multiple radio and microwave detectors, which can be switched into the focus beam for different science observations.

During the Apollo missions to the moon, the Parkes Observatory was used to relay communication and telemetry signals to NASA, providing coverage for when the moon was on the Australian side of the Earth.[3]

The telescope also played a role in relaying data from the NASA Galileo mission to Jupiter that required radio-telescope support due to the use of its backup telemetry subsystem as the principal means to relay science data.

The observatory has remained involved in tracking numerous space missions up to the present day, including

The observatory and telescope were featured in the 2000 film The Dish, a fictionalised account of the observatory's involvement with the Apollo 11 moon landing.

When Buzz Aldrin switched on the TV camera on the Lunar Module, three tracking antennas received the signals simultaneously. They were the 64 metre Goldstone antenna in California, the 26 metre antenna at Honeysuckle Creek near Canberra in Australia, and the 64 metre dish at Parkes.

In the first few minutes of the broadcast, NASA alternated between the signals being received from its two stations at Goldstone and Honeysuckle Creek, searching for the best quality picture.

A little under nine minutes into the broadcast, the TV was switched to the Parkes signal. The quality of the TV pictures from Parkes was so superior that NASA stayed with Parkes as the source of the TV for the remainder of the 2.5 hour broadcast. For a comprehensive explanation of the TV reception of the Apollo 11 broadcast, see "The Television Broadcasts" from the report "On Eagles Wings".

On Monday, 31 October 2011, Google replaced it's logo with a Google Doodle in honor of Parkes Observatory's 50th Anniversary.[4] It was only visible on Google in Australia.