The National Radio Astronomy Observatory (NRAO) is a Federally Funded Research and Development Center of the United States National Science Foundation operated under cooperative agreement by Associated Universities, Inc for the purpose of radio astronomy. NRAO designs, builds, and operates its own high sensitivity radio telescopes for use by scientists around the world.[2]

NRAO headquarters is located on the University of Virginia grounds. The North American ALMA Science Center and the NRAO Technology Center are also located in Charlottesville. This site is the workplace of nearly 100 scientists, including J. Richard Fisher and Jeffrey Mangum. [3] 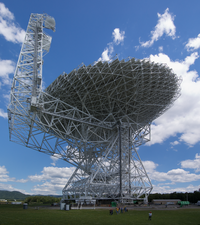 NRAO is the operator of the world's largest fully steerable radio telescope, the Green Bank Telescope, which stands near Green Bank, West Virginia.[4] The observatory contains many other notable telescopes, among them the 140-foot (43 m) telescope that utilizes an equatorial mount uncommon for radio telescopes, three 85-foot (26 m) telescopes forming the Green Bank Interferometer, a 40-foot (12 m) telescope used by school groups and organizations for small scale research, a fixed radio 'horn' built to observe Cygnus X-1, a bunk house to facilitate these guests, as well as a reproduction of the original antenna built by Karl Jansky while he worked for Bell Labs to detect the interference that was discovered to be previously unknown natural radio waves emitted by the universe.[5]

Green Bank is in the United States National Radio Quiet Zone, which is coordinated by NRAO for protection of the Green Bank site as well as the Sugar Grove, West Virginia monitoring site operated by the National Security Agency. The zone consists of a 13,000-square-mile (34,000 km2) piece of land where fixed transmitters must coordinate their emissions before a license is granted. The land was set aside by the Federal Communications Commission in 1958, as a radio quiet zone; the area closest to the telescope is free of fixed radio transmitters, and all other fixed radio transmitters including TV and radio towers inside the zone are required to transmit such that interference at the antennas is minimized by methods including limited power and using highly directional antennas. With the advent of wireless technology and microprocessors in everything from cameras to cars it is difficult to keep the sites free of radio interference. To aid in limiting outside interference, the area surrounding the Green Bank observatory was at one time planted with pines characterized by needles of a certain length as to 'block' electromagnetic interference at the wavelengths used by the observatory. At one point, the observatory faced the problem of North American flying squirrels tagged with US Fish & Wildlife Service telemetry transmitters. Electric fences and other radio wave emitters have caused great trouble for the astronomers in Green Bank.[6] 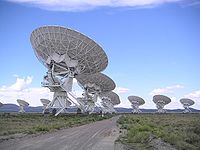 The NRAO's facility in Socorro is the Array Operations Center (AOC). Located on the New Mexico Tech campus, the AOC serves as the headquarters for the Very Large Array (VLA), which was the setting for the movie Contact, and the control center for the Very Long Baseline Array (VLBA). VLBA telescopes are located in Hawaii, the United States Virgin Islands, and several sites across the continental United States[7]

Offices are located on the University of Arizona campus. NRAO formerly operated the 12 Meter Telescope on Kitt Peak. NRAO suspended operations at this telescope and funding was rerouted to the Atacama Large Millimeter Array (ALMA) instead.[8] The Arizona Radio Observatory now operates the 12 Meter Telescope.[9]