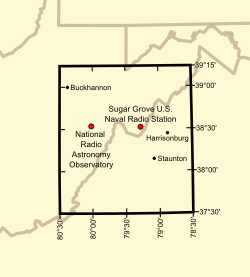 The United States National Radio Quiet Zone is a large area of land surrounding the National Radio Astronomy Observatory (NRAO) at Green Bank, West Virginia, and especially the large Green Bank Telescope radio telescope. The Radio Quiet Zone is a rectangle of land approximately 13,000 square miles (34,000 km2) in size that straddles the border area of Virginia and West Virginia. It includes all land with latitudes between 37.5°N and 39.25°N and longitudes between 78.5°W and 80.5°W. This area was chosen because it has a hilly topography that screens out most incoming radio signals, allowing the Green Bank telescopes to receive signals that are otherwise too low in power to be heard over the normal radio background in North America.

The National Radio Quiet Zone also protects the antennas and receivers of the U.S. Navy Information Operations Command (NIOC) at Sugar Grove, West Virginia.[1] The NIOC at Sugar Grove has long been the location of electronic intelligence gathering systems, and is today said to be a key station in the ECHELON system operated by the National Security Agency (NSA).[2]

The Radio Quiet Zone was established by the Federal Communications Commission (FCC) in 1958 to protect the observatory's radio telescopes from harmful interference. Omnidirectional and high-power transmissions are very restricted. Furthermore, fixed radio links are often built as tight-beamed directional links that do not illuminate the sensitive radio telescopes and electronic intelligence-gathering stations there.

Not all radio transmissions are prohibited in the Radio Quiet Zone. For example Citizen's Band radios, police and ambulance radios, and fire department radios are used there. However, large radio transmitter owners must typically coordinate their operations with representatives of the National Radio Astronomy Observatory and the U.S. Department of Defense. The Allegheny Mountain Radio company operates the only broadcast radio stations in the inner core of the Quiet Zone, with just one station in the AM band, and several low-power FM stations. Most radio transmitters within the area are licensed by the FCC (just as they are in the rest of the United States). Exceptions to the Radio Quiet Zone restrictions are usually determined on a case-by-case basis, with preference given to public safety concerns, such as remote alarm systems, repeaters for first responders, and NOAA Weather Radio. Due to the restrictions, the area has attracted people who believe they suffer from Electromagnetic hypersensitivity.[3]

Counties inside the Zone

Cities inside the Zone

Clarksburg, West Virginia, and Lynchburg, Virginia, are just outside the Quiet Zone.