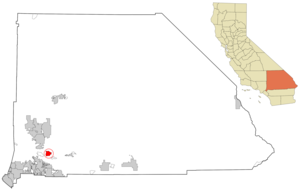 Lake Arrowhead is an in San Bernardino County, , USA. It lies within a (CDP) by the same name, adjacent to the . The population of the CDP was 8,934 at the 2000 census. Lake Arrowhead Village is an unincorporated community, with the Lake Arrowhead Communities Chamber of Commerce the "de facto" governing body. As of January 2008, Angela Yap is the Chairman of the Board and Lewis Murray is the President/CEO of the Lake Arrowhead Communities Chamber of Commerce. There seems to be a moderate amount of new residents moving to this scenic lake in the mountains. Fact|date=August 2008

The operates the nearby UCLA Conference Center, a full-service conference facility with lodging and meeting space.

For many years, Lake Arrowhead was the home of , "a fairyland setting where Santa's gnomes, elves and little animal friends make up a children's and grownups' paradise the year round." The tourist attraction opened in 1955 and closed 1998.

The Lake Arrowhead Yacht Club began operations in 1932 and is home to over 350 members and a fleet of over 35 sailboats.

As a scenic mountain resort in the , Lake Arrowhead's economy is almost completely supported by , both by casual vacationers and part-time residents. The primary tourism industries include real estate, lodging, dining, recreation, and retail sales. A complete list of amenities can be located at the Lake Arrowhead Communities Chamber of Commerce website [http://www.lakearrowhead.net. Despite this, full-time residents of Lake Arrowhead and surrounding mountain communities maintain a strong identity and sense of local pride. While Lake Arrowhead has no official "town center", the Lake Arrowhead Village serves as the main commercial area for both locals and tourists and includes a number of factory outlets, boutiques, restaurants, and a supermarket.

There were 3,243 households out of which 37.3% had children under the age of 18 living with them, 62.6% were married couples living together, 8.9% had a female householder with no husband present, and 24.6% were non-families. 18.7% of all households were made up of individuals and 6.0% had someone living alone who was 65 years of age or older. The average household size was 2.75 and the average family size was 3.17.