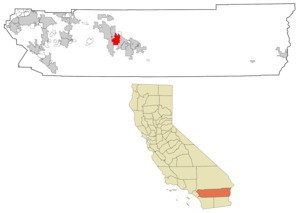 mapsize = 250x200px
map_caption = Location in Riverside County and the state of

Rancho Mirage is a city in Riverside County, , . The population was 13,249 at the 2000 census, but the seasonal (part-time) population can exceed 20,000. In between Cathedral City and Palm Desert, it is one of the eight cities of the (Palm Springs area). Rancho Mirage was incorporated in from a merger of Mirage Cove with five unincorporated areas known as the "Cove communities" (Desert, Magnesia, Palmas, Tamarisk and Thunderbird), but had 3,000 permanent residents at the time.

Although the first modern settlements date back to the 1920s and 1930s, Rancho Mirage got its claim to fame after World War II. The Annenberg Estate or "Sunnylands" in the area had long been popular with the wealthy and powerful, including , , , , , and and the Campbells. Several US presidents have vacationed here, and was a frequent visitor who later bought a house. The is located in the of the town. President Gerald Ford was living in the town at the time of his death.

The Agua Caliente Mission Band of Indians of Palm Springs runs the on the intersection of Bob Hope Drive and Ramon Road off the I-10 freeway, opened in 2002. The thriving casino is a popular destination for locals, tourists, and gaming enthusiasts, and the tribal board announced in 2006 that Agua Caliente Casino will include a 12-story hotel, two golf courses, tennis courts, a shopping mall, and a convention center-sports arena facility, but will break ground after a federal environmental report. Fact|date=February 2007

Rancho Mirage has expanded its economic profile from once regulated to seasonal, resort-based and low-paying, to include more light industry and commerce by the I-10 freeway and , high-end retail centers like the River shopping complex, opened in 2005 and built around an artificial lake that resembles a castle's moat.

There were 6,813 households out of which 10.5% had children under the age of 18 living with them, 52.9% were married couples living together, 5.2% had a female householder with no husband present, and 40.2% were non-families. 32.3% of all households were made up of individuals and 19.8% had someone living alone who was 65 years of age or older. The average household size was 1.92 and the average family size was 2.36.

The city includes one elementary school (Rancho Mirage Elementary) that is part of the , and the District is building a new high school, with an expected completion date of the 2009-10 school year.