Long Island serial killer
"Craigslist Ripper" redirects here. Not to be confused with other Craigslist Killers

The Long Island Serial Killer (also referred to by media sources as the "Gilgo Killer" and the "Craigslist Ripper") is an unidentified suspected serial killer who is believed to have murdered at least four prostitutes since 2007 and dumped their bodies along the Ocean Parkway, near the remote beach towns of Gilgo Beach and Oak Beach in Suffolk County and the area of Jones Beach State Park in Nassau County.

The remains of four victims were found in December 2010, while six more sets of remains were found in March and April 2011.[2][3][4] Police say that the latest sets of remains appear to predate the four bodies found in December 2010. [5] On May 9, 2011, authorities reported that two of the newest sets of remains may be the work of a second killer.[6] In fact, investigators now believe that three or four different murderers may be responsible for bodies found recently along the Long Island coastline.[7] According to Suffolk County District Attorney Thomas Spota, "It is clear that the area in and around Gilgo Beach has been used to discard human remains for some period of time." [8]

Police were initially searching for Shannan Gilbert, a 24-year-old prostitute[9][10] from New Jersey who was reported missing in May 2010. She was last seen in the area after meeting a client in nearby Oak Beach.

In December 2010, a police officer and his dog on a routine training exercise discovered the first body - "the skeletal remains of a woman in a nearly disintegrated burlap sack".[11] This discovery led to three more bodies being found two days later in the same area on the north side of the Ocean parkway. Suffolk County Police Commissioner Richard Dormer said "Four bodies found in the same location pretty much speaks for itself. It's more than a coincidence. We could have a serial killer."[12] 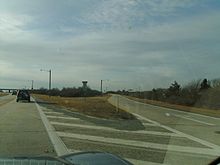 Exit for Robert Moses Causeway on the Ocean Parkway

A few months later, in late March and early April 2011, four more bodies were discovered in another area off the parkway. Suffolk Police expanded the search area up to the Nassau County border, looking for more victims. Shannan Gilbert has still not been found.[13]

On April 6, 2011, Detective Lt. Kevin Smith of the Nassau County Police Department said that his office will "further explore and investigate any criminal activity which may be in close proximity to the recently discovered human remains found in Suffolk." Smith also said that Nassau Police will be coordinating with Suffolk County and New York State Police on the investigation.[14]

On April 11, 2011, the search for more bodies began in Nassau County. Local media reported that an additional set of partial human remains was found, as well as a separate skull, bringing the potential total number of victims found since December to ten.[15] On April 22, 2011, two human teeth were found about a foot from the skull.[16]

On September 20, 2011, police released composite sketches of two of the unidentified victims whose remains were found in March and April 2011 (the Asian male and Jane Doe No. 6), as well as photos of jewelry found on the remains of the female toddler and her mother, found on April 4 and 11, 2011, respectively.[18] The toddler's mother was also revealed as one of the sets of remains found in Nassau County on April 11.[18]

Also on September 20, police revealed that the second set of remains found in Nassau County on April 11, 2011, matched two legs that were found in a garbage bag washed up on Fire Island in 1996.[18][19]

As of September 22, 2011, the police had received over 1,200 tips via text, email and phone since the beginning of the investigation.[19]

Police do not know if the murders are the work of one or several killers.[18]

Identity of the Killer(s)

There has been much speculation in the media concerning the identity of the killer or killers, currently known as "Unsub" - Unknown Subject.[20] Some profilers speculate that the killer could have ties to law enforcement due to his sophisticated knowledge of police procedures.[21] Others believe that the murderer is an organized killer, with a detailed knowledge of law enforcement techniques which have thus far helped him avoid detection, and that he is a white male and very familiar with the South Shore of Long Island.[20]

Some have speculated that serial killer and former Long Island resident Joel Rifkin may have been responsible for some of the older remains found in March and April 2011, as four of his victims' bodies were never found.[22] In an April 2011 prison interview with Newsday, Rifkin denied having anything to do with recently-discovered remains.[22] Experts and victims' rights advocates, however, believe that Rifkin's recent statements have no value. [22]

Of the ten bodies or sets of remains found since late 2010, the four discovered in December 2010 have been identified as missing prostitutes who all advertised their services on Craiglist. They had all been strangled and their bodies wrapped in burlap sacks.[23] All are believed to have been killed elsewhere.

The four sets of remains discovered on March 29 and April 4 were all within two miles and to the east of those found in December. They included two women, a man, and a toddler.[6] A skull and a partial set of remains were found on April 11 after the search expanded into Nassau County.[30] They were found about one mile apart, approximately five miles west of those found in December. [31]

On May 9, 2011, it was reported that the remains of a skull, a pair of hands and a forearm found on March 29 belonged to a prostitute named Jessica Taylor, 20, whose dismembered body was found in 2003, 45 miles away in Manorville, New York. She had worked in Washington, D.C., and Manhattan. [6][32]

A head, right foot and hands found on April 4 belonged to an unidentified victim known as "Jane Doe No. 6," the rest of whose body was found on November 19, 2000, in the same part of Manorville where Jessica Taylor's remains were discovered. The dismembered remains of Jessica Taylor and Jane Doe No. 6 were both disposed of in a similar manner and in the same town, suggesting a link. Their deaths are dissimilar to those of the four women found in December 2010.[6] In September 2011, police released a composite sketch of Jane Doe No. 6: she was about 5' 2" and was between 18 and 35 years old. It is likely that she worked as a prostitute.[18]

In May 2011, the media reported that the two remaining sets of remains found in Suffolk County appeared to be those of a young Asian male who died a violent death, and a female toddler, between 18 and 24 months, wrapped in a blanket and showing no visible signs of trauma. At that time, it was believed that their deaths did not appear to be linked to any of the others.[6][33]

On September 20, 2011, police revealed new details about these remains. Police released a composite sketch of the Asian male, who was wearing women's clothes at the time of his death due to blunt force trauma, and was likely working as a prostitute.[18] He was between 17 and 23 years of age, 5' 6" in height, and missing four teeth; he had been dead for between five to 10 years.[18] The female toddler was between 16 and 23 months of age, and was wearing earrings and a necklace. She was also reported to be "non-Caucasian".[19] Her mother was identified as one of the sets of remains found in Nassau County on April 11.[18]

On September 20, 2011, police also revealed new information on the two sets of remains discovered in Nassau County on April 11: one set was identified as the mother of the female toddler found in Suffolk County on April 4, and the other set matched a pair of legs found in a garbage bag on Fire Island in 1996. Police also released photos of inexpensive jewelry found on the remains of both mother and daughter.[18]

On May 22, 2011, a headless, decomposed body of undetermined gender was discovered washed up on Amagansett Beach, about 100 miles east of the area where ten other sets of remains were found near Gilgo Beach.[34] The next day, an autopsy revealed that the remains were those of a young male, 20-30, of slight build. Divers were not able to find the skull. The remains did not display any obvious signs of trauma and appeared to have been in the water for months.[35]

Authorities in Atlantic City, New Jersey, had been investigating to see if these bodies were linked to four similar unsolved murders there, where the bodies of four murdered prostitutes were found behind a motel in November 2006. However, any connection between the Long Island murders and the Atlantic City murders has now been ruled out.[36]

On May 17, 2011, the New York Post reported that Long Island police are now revisiting at least two other similar unsolved murders of prostitutes. The only victim named in the article was Tanya Rush, 39, a mother of three from Brooklyn whose dismembered body was found in a small suitcase in June 2008 on the shoulder of the Southern State Parkway in Bellmore, New York.[37]