The New York Post is the 13th-oldest newspaper published in the United States and is generally acknowledged[citation needed] as the oldest to have been published continuously as a daily, although – as is the case with most other papers – its publication has been periodically interrupted by labor actions.[2] Since 1993, it has been owned by media mogul Rupert Murdoch's News Corporation, which had owned it previously from 1976 to 1988. It is the seventh-largest newspaper in the U.S. by circulation.[3] Its editorial offices are located at 1211 Avenue of the Americas, in New York City, New York. The Post is known for its sensationalist headlines.[citation needed]

The New York Post, established on November 16, 1801 as the New-York Evening Post, describes itself as the nation's oldest continuously published daily newspaper. The Hartford Courant, believed to be the oldest continuously published newspaper, was founded in 1764 as a semi-weekly paper; it did not begin publishing daily until 1836. The New Hampshire Gazette, which has trademarked its claim of being The Nation's Oldest Newspaper, was founded in 1756, also as a weekly. Moreover, since the 1890s it has been published only for weekends.

The Post was founded by Alexander Hamilton with about US$10,000 from a group of investors in the autumn of 1801 as the New-York Evening Post,[4] a broadsheet. Hamilton's co-investors included other New York members of the Federalist Party, such as Robert Troup and Oliver Wolcott,[5] who were dismayed by the election of Thomas Jefferson as U.S. President and the rise in popularity of the Democratic-Republican Party.[6] The meeting at which Hamilton first recruited investors for the new paper took place in then-country weekend villa that is now Gracie Mansion.[7] Hamilton chose William Coleman as his first editor.[6]

In the summer of 1829, Bryant invited William Leggett, the locofoco Democrat, to write for the paper. There, in addition to literary and drama reviews, Leggett began to write political editorials. Leggett's liberal philosophy entailed a fierce opposition to central banking, a support for voluntary labour unions, and a dedication to laissez-faire economics. He was also an abolitionist and a member of the Equal Rights Party. Leggett became a co-owner and editor at the Post in 1831, eventually working as sole editor of the newspaper while Bryant traveled in Europe in 1834–5.

Another co-owner of the paper was John Bigelow. Born in Malden-on-Hudson, New York, John Bigelow, Sr. graduated in 1835 from Union College, where he was a member of the Sigma Phi Society and the Philomathean Society, and was admitted to the bar in 1838. From 1849 to 1861, he was one of the editors and co-owners of the New York Evening Post.

In 1881 Henry Villard took control of the New-York Evening Post, as well as The Nation, which became the Post's weekly edition. With this acquisition, the paper was managed by the triumvirate of Carl Schurz, Horace White and Edwin L. Godkin.[10] When Schurz left the paper in 1883, Godkin became editor-in-chief.[11] White became editor-in-chief in 1899, and remained in that role until his retirement in 1903.[12][13] In 1897, both publications passed to the management of Villard's son, Oswald Garrison Villard,[14] a founding member of both the National Association for the Advancement of Colored People[15] and the American Civil Liberties Union.[16] Villard sold the paper in 1918, after widespread allegations of pro-German sympathies during World War I hurt its circulation.

The new owner was Thomas Lamont, a senior partner in the Wall Street firm of J.P. Morgan & Co.. Unable to stem the paper's financial losses, he sold it to a consortium of 34 financial and reform political leaders, headed by Edwin Francis Gay, dean of the Harvard Business School, whose members included Franklin Delano Roosevelt. Conservative Cyrus H. K. Curtis[17]—publisher of the Ladies Home Journal—purchased the New-York Evening Post in 1924[18] and briefly turned it into a non-sensational tabloid in 1933.[18] J. David Stern purchased the paper in 1934, changed its name to the New York Post,[18] and restored its broadsheet size and liberal perspective.[19]

Dorothy Schiff purchased the paper in 1939; her husband, George Backer, was named editor and publisher.[20] Her second editor (and third husband) Ted Thackrey became co-publisher and co-editor with Schiff in 1942,[21] and recast the newspaper into its current tabloid format.[22] James Wechsler became editor of the paper in 1949, running both the news and the editorial pages; in 1961, he turned over the news section to Paul Sann and remained as editorial-page editor until 1980. Under Schiff's tenure the Post was devoted to liberalism, supporting trade unions and social welfare, and featured some of the most-popular columnists of the time, such as Joseph Cookman, Drew Pearson, Eleanor Roosevelt, Max Lerner, Murray Kempton, Pete Hamill, and Eric Sevareid, in addition to theatre critic Richard Watts, Jr. and Broadway columnist Earl Wilson. In 1976 the Post was bought by Rupert Murdoch for US$30 million.[23] The Post at this point was the only surviving afternoon daily in New York City, but its circulation under Schiff had grown by two-thirds.[6] Historian/activist Howard Zinn's parents introduced him to literature by sending 25 cents plus a coupon to the Post for each of the 20 volumes of Charles Dickens' collected works.[24] 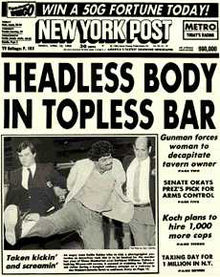 One of the paper's most famous headlines, from the April 15, 1983 edition.

Murdoch imported the sensationalist "tabloid journalism" style of many of his Australian and British newspapers, such as The Sun (the highest selling daily newspaper in the UK). This style was typified by Post's famous headlines such as “Headless body in topless bar” (shown on the right). In its 35th-anniversary edition, New York Magazine listed this as one of the greatest headlines ever. It also has five other Post headlines in its "Greatest Tabloid Headlines" list.[25]

Because of the institution of federal regulations limiting media cross-ownership after Murdoch's purchase of WNYW-TV to launch the Fox Broadcasting Company, Murdoch was forced to sell the paper for US$37.6 million in 1988 to Peter S. Kalikow, a real-estate magnate with no news experience.[26] When Kalikow declared bankruptcy in 1993,[26] the paper was temporarily managed by Steven Hoffenberg,[26] a financier who later pleaded guilty to securities fraud;[27] and, for two weeks, by Abe Hirschfeld,[28] who made his fortune building parking garages. After a staff revolt against the Hoffenberg-Hirschfeld partnership — which included publication of an issue whose front page featured the iconic masthead photo of Alexander Hamilton with a single tear drop running down his cheek[29]—The Post was repurchased in 1993 by Murdoch's News Corporation. This came about after numerous political officials, including Democratic governor of New York Mario Cuomo, persuaded the Federal Communications Commission to grant Murdoch a permanent waiver from the cross-ownership rules that had forced him to sell the paper five years earlier.[30] Without that FCC ruling, the paper would have shut down. Under Murdoch's renewed direction, the paper continued its conservative editorial viewpoint.

The Post has been criticized since the beginning of Murdoch's ownership for sensationalism, blatant advocacy and conservative bias. In 1980, the Columbia Journalism Review opined that "the New York Post is no longer merely a journalistic problem. It is a social problem – a force for evil."[31]

Perhaps the most serious allegation against the Post is that it is willing to contort its news coverage to suit Murdoch's business needs, in particular that the paper has avoided reporting anything that is unflattering to the government of the People's Republic of China, where Murdoch has invested heavily in satellite television.[32]

Critics say that the Post allows its editorial positions to shape its story selection and news coverage. Post executive editor Steven D. Cuozzo, has responded that the Post "broke the elitist media stranglehold on the national agenda."

According to a survey conducted by Pace University in 2004, the Post was rated the least-credible major news outlet in New York, and the only news outlet to receive more responses calling it "not credible" than credible (44% not credible to 39% credible).[33]

The Public Enemy song "Apocalypse '91...The Enemy Strikes Black is a complaint about what they believed to be negative and inaccurate coverage African-Americans received from the paper.

The Post and the Daily News often take potshots at each other's work and accuracy, particularly in their respective gossip-page items.

In certain editions of the February 14, 2007, newspaper, an article referring to then-Senator Hillary Clinton's support base for her 2008 presidential run referred to then-Senator Barack Obama as "Osama";[45] the paper realized its error and corrected it for the later editions and the website.[46] The Post noted the error and apologized in the February 15, 2007, edition.[47] Earlier, on January 20, 2007, the Post received some criticism[48] for running a potentially misleading headline, "'Osama' Mud Flies at Obama",[49] for a story that discussed rumors that Obama had been raised as a Muslim and concealed it.

In 1996, the Post launched an internet version of the paper nypost.com. The original site included color photos and sections broken down into News, Sports, Editorial, Gossip, Entertainment and Business. It also had an archive for the past seven days. Since then, it has been redesigned a number of times — with the latest incarnation launched on September 6, 2009. In 2005 the website implemented a registration requirement but removed it in July 2006.

The paper is well known for its sports section, which has been praised for its comprehensiveness; it begins on the back page, and among other coverage, contains columns about sports in the media by Phil Mushnick.

The Post is also well known for its gossip columnists Liz Smith and Cindy Adams.

The best-known gossip section is "Page Six", created by the late James Brady[50] and currently edited by Emily Smith. February 2006 saw the debut of Page Six Magazine, distributed free inside the paper. In September 2007 it started to be distributed weekly in the Sunday edition of the paper. In January 2009, circulation for Page Six Magazine was cut to four times a year.

One commentator has suggested that the Post cannot become profitable as long as the competing Daily News survives, and that Murdoch may be trying to force the Daily News to fold or sell out.[53]

The Post's website also has high traffic. According to recent Nielson net ratings, the site ranks 8th in number of unique visitors to online newspapers.

From 1926, the newspaper's main office was at 75 West Street. In 1967, Schiff bought 210 South Street, the former headquarters of the New York Journal American, which closed a year earlier. The building became an instantly recognizable symbol for the Post. In 1995, then-owner Rupert Murdoch relocated the Post to its present Midtown headquarters at 1211 Avenue of the Americas (Sixth Avenue). The Post shares this building with Fox News Channel and The Wall Street Journal, both of which are also owned by Murdoch.